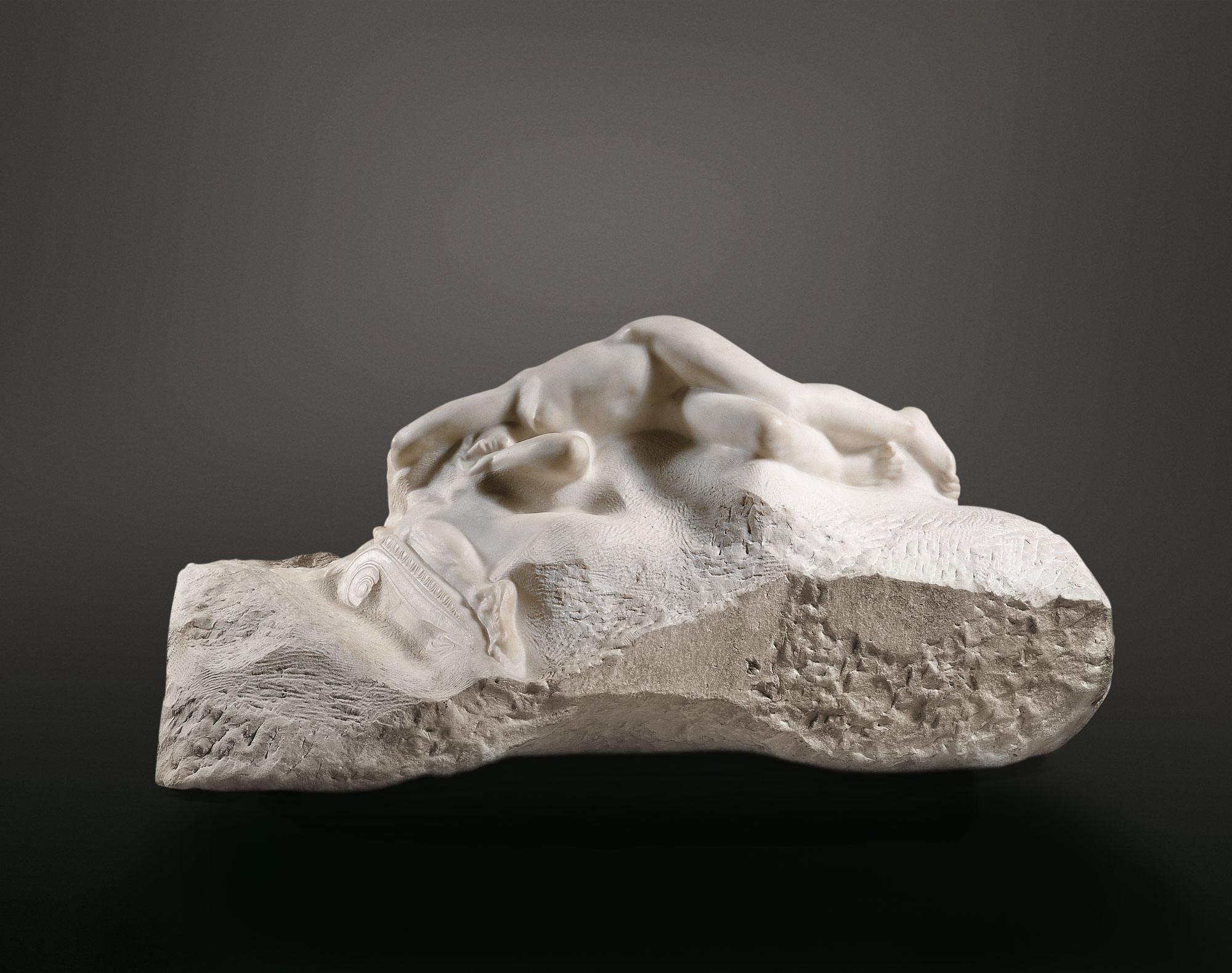 After 1900 the admiration that Rodin had always felt for Antiquity became more evident. It surfaced in his writings on ancient sculpture and in the collection of fragments of sculptures and pottery that he assembled. In its title this extremely symbolic group is clearly the work that most directly evokes this interest.

Sometimes also called Ruins of Athens, Ruins of Carthage or Woman Fallen Asleep from Pain, it shows two intertwined figures next to an Ionic capital that is almost buried in the sand. One of the figures is curved round, while the other one, a male body that symbolises Athens, is beneath it with the feet higher than the head. The female figure, “which undulates like a line of hills-which was indeed his intention”, in the words of René Chéruy (Musée Rodin archive, Paris), could have been related to the nude known as Fatigue, but the left arm is stretched out rather than placed on the breast and the right leg is bent, the foot placed in front of and not behind the other leg. “The city of Athens that once upon a time lived like a beautiful woman attracting the admiring looks of the world with her glorious beauty, no longer exists, ” Rilke explains. “Her body, which at first rose like the Acropolis, is now recumbent and forms only a mountain with contours that, caressed by the light, vibrate in plaintive and sad lines. Thus she sleeps deeply, the sweet figure that blossoms with far-away memories, resting on her right hand, the left arm lost in her spread out hair. And with her body and her sleep she encloses a luminous past: the divine debris of the adored statues, heroes’ feet [sic], a goddess’s breasts, youths’ heads and the flora of the capitals where the happy sap still flows./ And from the foot of that mountain a mass of young flowers ascends as if searching for the lost sisters of the past./ This marble, executed in a model and with the finest nuances, exhales an atmosphere of night falling, infinitely sad in its moon’s softness.” (Musée Rodin archive).

A first marble, which we know of through Chéruy, executed by the “meticulous Schnegg” (Lucien or Gaston), was spotted in the artist’s studio by James and Betty Smith in September 1903. They acquired it and it was sent to them shortly afterwards. Rodin had had a series of photographs taken of this marble or of the cast he had kept, some just of the sculpture, some also showing the studio setting. Haweis and Coles did not therefore bother to conceal Victor Hugo’s outstretched arm, visible behind the group on the negative, the Symbolist quality of which is reinforced by the lighting effects (Musée Rodin, Ph. 518). Rodin seemed to be attached to this work, which expressed his nostalgia for a vanished civilisation. However, almost as soon as he had completed it, he let it go. From February 1904, at the same time that a text by Rodin which he entitled “The Lesson of Antiquity” appeared in Le Musée. Revue d’art antique (no. 1, January-February 1904), he had a bronze cast and then started on the execution of a second marble. On 16 October the transporter Mathias billed Dolivet, the assistant responsible for blocking-out, for the “transport of a marble group and model (put to sleep by love)” which he had picked up at Ganier’s, the metteur aux points, the previous 1 August, and a pencil note (next to the “woman put to sleep by love, ” a title most probably given by Mathias after he had seen the work), confirms that this is The Death of Athens. Dolivet had ample time to execute the work once August Thyssen placed his commission in December 1905 explaining how, barely a month later, Rodin could announce that the work was ready. This second marble is larger than the first and also differs from it in the form of the marble block: the Liverpool marble is characterised by its irregularity as it falls softly away in front of the capital, while on the other side it rises up to the extent that it lifts off the ground.