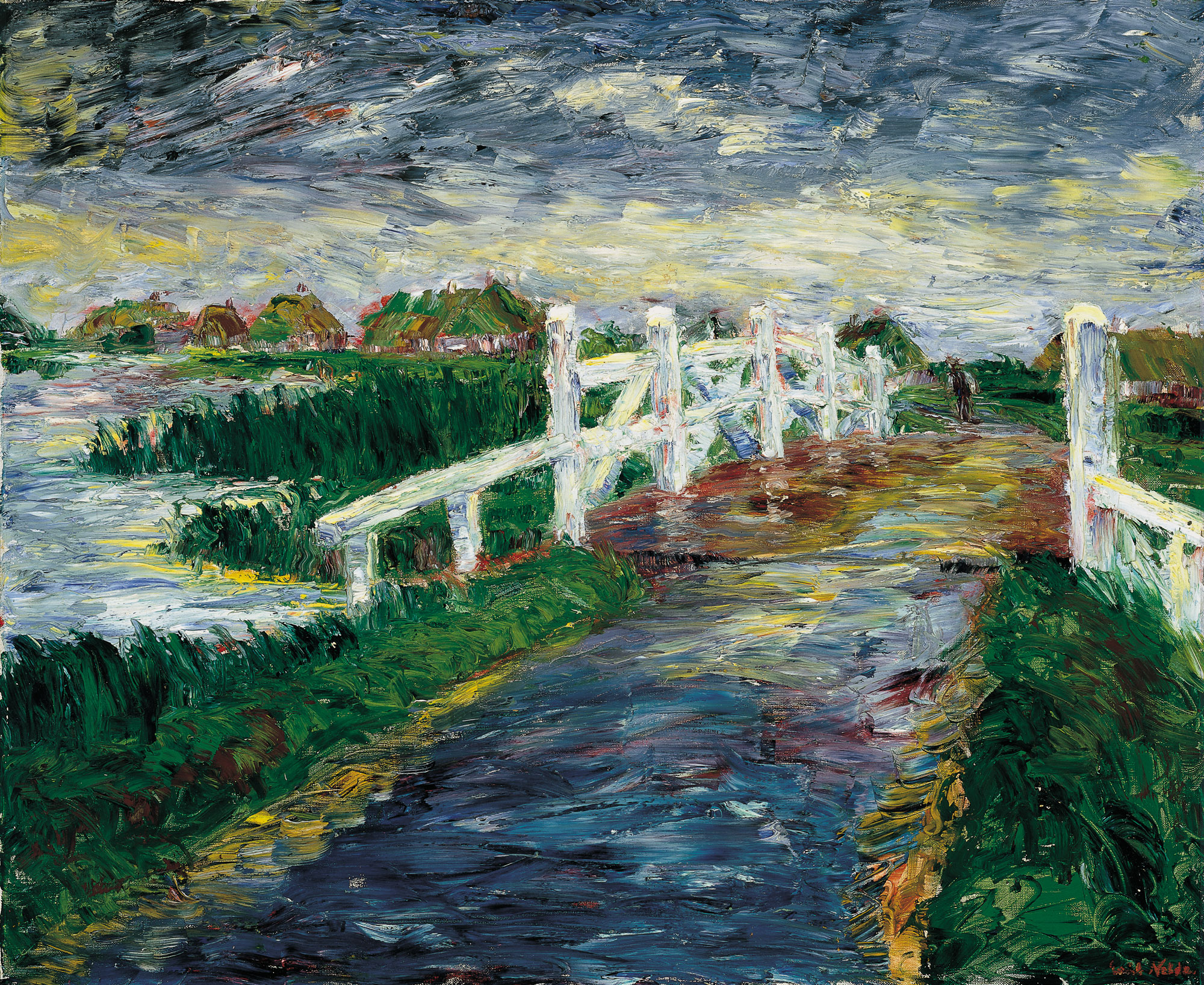 The characteristic wetland landscape of North Friesland near Ruttbüll, where Nolde spent the summers of 1909 and 1910, provides the background for the painting Marsh Bridge. The composition is dominated by a path rendered in abbreviated perspective that starts in the foreground, crosses the bridge and leads downward before disappearing in the distance. The converging lines used to describe this path give access to the landscape in the painting. This artistic device eliminates any visual resistance that might hinder immediate perception of the landscape and generates a kind of initiation effect, inviting the viewer to follow a path that is both literally and figuratively uplifting. The white railings on the bridge after which the painting is named not only stand out by virtue of their colour but also clearly point the way to an understanding of the landscape.

The surface of the wet path, a trapezoid that dominates the composition, is framed by luxuriant vegetation, the railings and bushes, further emphasising the importance of solid ground and a negotiable passage through the marshes. Visible on the other side of the bridge is a dark spot consisting of vertical brushstrokes, which could be interpreted as a human figure viewed from the rear. It is probably someone who has already taken the path on which the artist has located us. Towards the horizon we see inhabited farmland and the village to which the path leads. A cloudy sky has brought a rain shower, which, judging from the quality of light in the clouds, has not ceased completely. The sky, in which so much energy has been powerfully condensed, is an important element in the painting.

The movement in the sky is reflected on the surface of the path, where brushstrokes and spots of colour vibrate. Nolde takes advantage of the moment at which the rain stops to demonstrate the natural forces at work in this landscape. With light, expressive brushstrokes, he follows the course of this drama of nature, blurring and overlapping his colours in clouds, plants, water and grasses as if to join forces with the wind and the air currents he sets in motion. The diverse directions of his brushstrokes seek parallels with the untameable dynamics of the elements. As the painter himself expressed it, “Nature in art represents the most vigorous, vital, and blooming power of nature.” This inner conviction played a significant role in Nolde’s landscape painting. It shaped the character of the organic in a mode of representation that refused to be restricted exclusively to the reproduction of natural phenomena. Indeed, Nonde’s painting integrates the actions and consequences of these phenomena in the resulting images. In 1944, the artist wrote, “Nature can be a wonderful aid to an artist, if he knows how to guide it. But it is neither art nor artist. He alone is that.” This attitude is reflected, for example, in the way he painted spots of colour, mixing pigments and applying them on top of each other. Nolde created mixtures of colour on the canvas and imitated with his brush the movements of the wind and the waves of the water. These mixtures produce iridescent, lustrous effects, clearly outlined shadows as well as dirty, washed-out tones. The painter deliberately pursued spontaneity in his painting technique, an approach that was entirely in keeping with his desire to “collaborate with nature.” It was during his stay in 1908 near Jena that Nolde began to experiment with watercolour and developed an interest in introducing the element of fate into his painting with his technique. He immediately incorporated this idea of intentional randomness into his oil paintings.