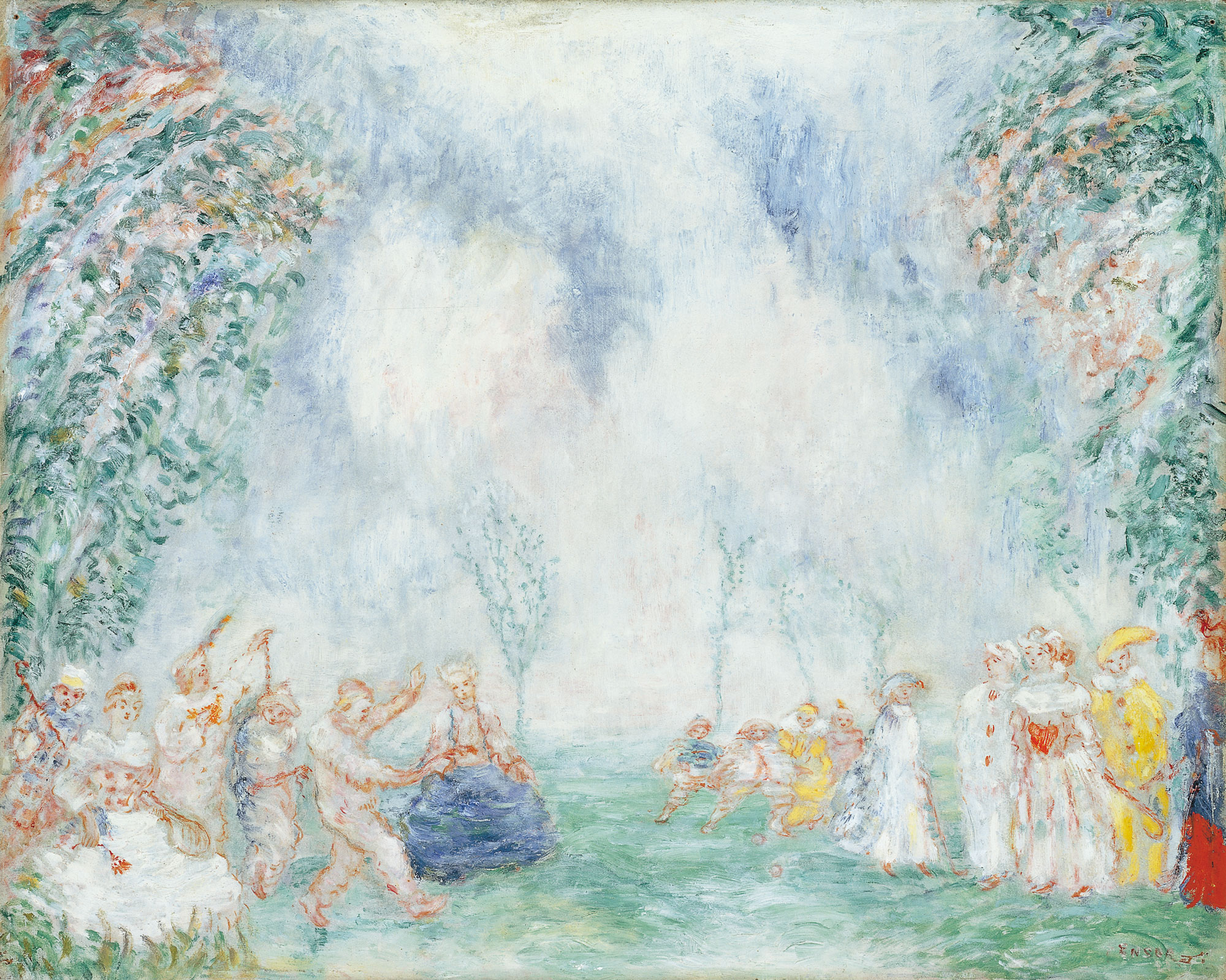 Ensor and the avant-garde by the sea, Ostende, Museum voor moderne kunst

The characters of a masked ball appear in a garden framed, like a stage, by tall trees. To the left, there are some musicians and a couple dancing; to the right, the spectators, dressed in costumes from the commedia dell’arte (like the yellow Pierrot) and, among them, a queen of hearts. The scene freely recreates the spirit of the 18th century, and especially of Watteau, whose works fascinated Ensor from very early on, and inspired him for a long series of variations. The first of these, Jardin d’amour (1888, etching and dry-point enhanced with chalk and paintbrush using different colours) was based on Les Jaloux, a lost painting by Watteau of which only a printed version remains. Some years later, between 1910 and 1930, Ensor returned many times to the subject of the Jardin d’amour.

Watteau’s gentle sweetness seems at first sight very distant from the macabre humour we associate with Ensor. But the Goncourt brothers and the poet Verlaine (in his Fetes galantes of 1869) had already perceived in the great rococo master a sense of crepuscular melancholy touched by death, a vein exploited by the end of the century decadent movement. In acknowledgement to this debt, Ensor added to one of his gardens of love the inscription: “in remembrance of Verlaine”. Both in his most sinister visions and in his gentler ones, Ensor shared with Watteau his love for the theatre, the masks and elaborate sceneries, and the concept of life as a type of fantastic ballet.

Towards 1910, Ensor was also working precisely on the composition of a ballet-pantomime entitled “The ladder of love” (La gamme d’amour or Flirt de marionnettes), for which he wrote the libretto and the music, and designed the costumes and the decors. This complete work opened in Ostend in 1911, but for more than twenty years the artist continued to create around it an endless series of coloured drawings, monotypes and paintings.

Also the apparitions in this garden are, as Ensor himself would say, “figures of love, of reverie, musical”. Nothing is defined or tangible; everything becomes phantasmagorical in the hazy harmony of pastel colours. The grass, the trees and the sky blend into a greenish blue atmosphere. The figures, insinuated with light warm marks (red, pink, yellow.) with shaky outlines, come out of the iridescent colour and dissolve immediately, as ephemeral as the notes of a melody or the steps of a dance.