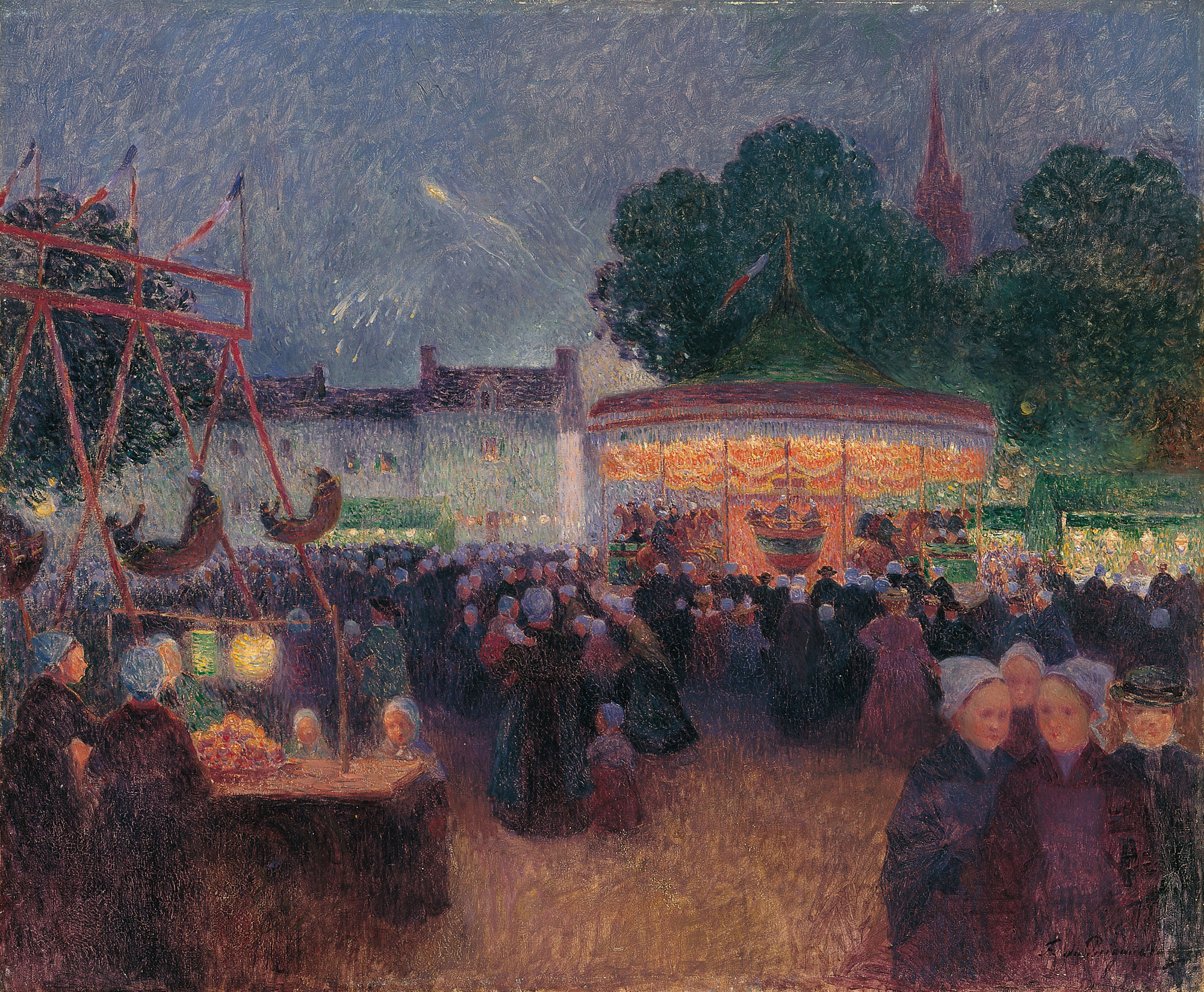 On the 14 July, France’s national holiday, the inhabitants of the small villages of Bretagne organised country fairs, with all the attractions of the time: roundabouts, swings, shooting galleries, sweet stalls, lamplit balls and parades and, finally, fireworks. This is the subject illustrated here. In fact, during his second stay at Pont-Aven in the years 1894-1898 Puigaudeau was fascinated by such scenes of popular merriment. The women and children are dressed in ceremonial attire: a large dark blue dress with a white lace apron, and the traditional bonnet (all different according to the manner of each village), an embroidered waistcoat and the famous round hat for the boys.

The atmosphere, and in particular lamplight, captured the painter’s full attention. In fact, this is the aspect he most carefully attempted to render in the picture. To do this, he worked in stages: first he used photographs to study the figures of the children in the foreground, then he executed many drawings of the other elements of the composition: the stalls, the roundabout, the swings; drawings made on tracing paper, which were the detailed renderings of small oil sketches of various motifs.

All those elements were then used to make a large drawing of the final composition on tracing paper, like a puzzle. The back of the tracing paper, of the same size as the future painting, was covered in charcoal, and the drawing was transferred onto the canvas with a hard pencil. Thus Puigaudeau, in the strictest Impressionist tradition, could apply many times the same preparatory drawing to various canvases. The aspect in which the originality of this artist is best perceived is his attempt to represent artificial lighting at night. He is one of the very few artists of his generation to concentrate exclusively on that fantastic, almost magical, moment. The lighting produced by street lamps and lanterns is not concentrated in the centre of the composition but is dispersed in three or four points. Light is thus no longer static: it varies in a range of subtle degradations producing a vibration, a twinkling which enlivens the composition, preventing it from being fixed. Thus, Puigaudeau’s nights are never really black, but are animated by unsuspected life which he reveals to us when we look at his works.

This oil from the Carmen Thyssen-Bornemisza Collection is probably one of his most elaborate paintings, as it gathers all the elements which characterise Puigaudeau’s art.

Inside a Shop in Pont-Aven