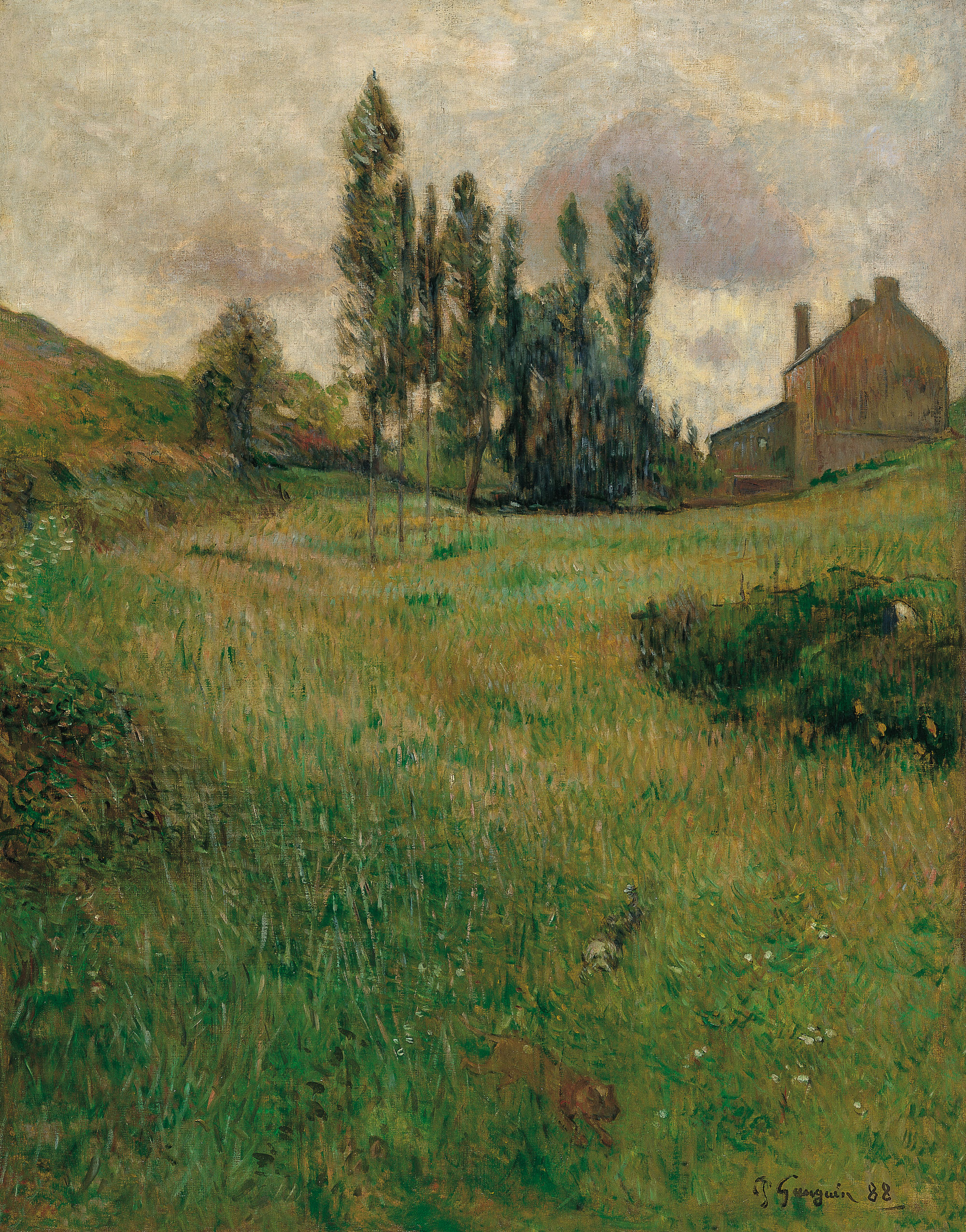 From January to October 1888 Gauguin spent a second period in Pont-Aven, staying at Marie-Jeanne Gloanec’s inn. During those months he painted around thirty pictures, mainly landscapes inspired by Pont-Aven and its surroundings. They are country scenes showing rural activities.

At the beginning of March Gauguin wrote to Émile Schuffenecker: “you are attached to Paris, and I am to the countryside. I love Bretagne. There I can find the wild, the primeval. When my clogs hit this granite ground, I can hear the deep, matt and powerful tone I’m looking for in painting.”

This picture was painted in the immediate surroundings of Pont-Aven. Gauguin went everywhere on foot, and so his works were painted in a very limited area.

The fields depicted are typical of this region, they spread in a hilly landscape, marked by a group of poplars in the centre. These trees indicate the presence of a waterway not visible in the painting. The scene is undoubtedly upriver from Pont-Aven, where the river is still a simple stream.

The house at the back on the right has two gable chimneys, characteristic of Breton houses, but the third and much taller chimney is that of a factory.

The fields are in bloom; in the foreground there are two dogs, typical of Gauguin, who liked to put dogs in his compositions, in the country and on the beaches, in Bretagne as well as in Tahiti.

On the right, between the dogs in the foreground and the house in the background, we can see the outline of a woman leaning over while she is picking up something, whose bonnet stands out as a white speck on the grass.

This Impressionist painting brings to mind Monet-the paint is applied in thin layers and with a gentle brushstroke.

The picture was painted around May, before the arrival of Émile Bernard in August, an event which marked an artistic revolution for both painters. As a result, Émile Bernard produced Breton Women in the Fields, and Gauguin answered with The Vision of the Sermon, two synthetic masterpieces.

Here, the composition is still classical, with an ascending perspective which leads the eye towards the line of poplars, prolonged to the left by the slope of the hill, and to the right by the building. The colours are realistic and the rural subject still recalls Camille Pissarro, Gauguin’s first master. The running dogs are of minor importance, despite being the title of the work.

Contrary to many others, this painting was sold very quickly by Théo Van Gogh to a Parisian collector in November 1888.