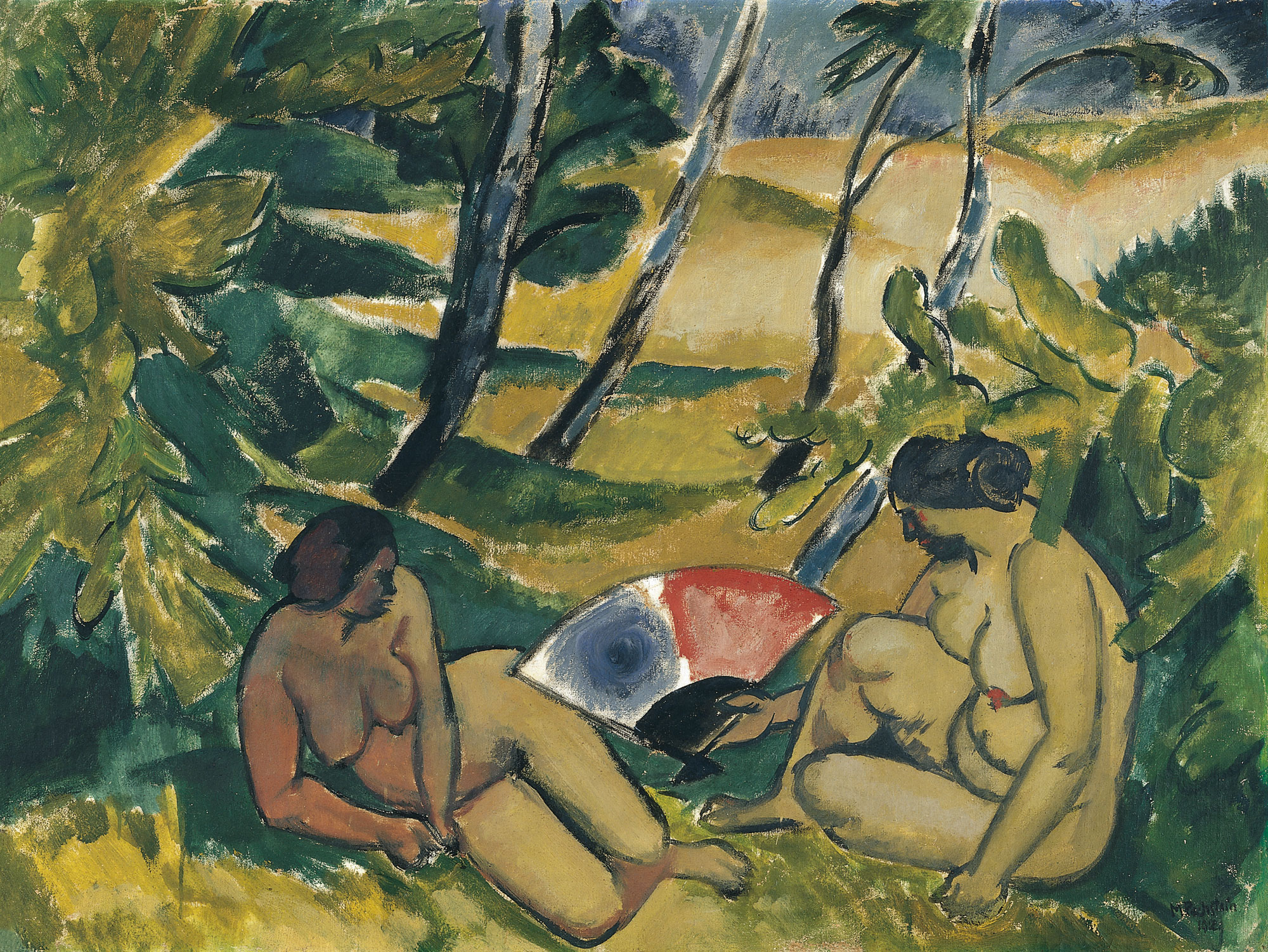 Pechstein’s departure from Die Brücke, the artists’ group he had joined in 1906, heralded changes in his style and the year 1912 marks a decisive turning point in his artistic development. He continued, however, to focus on his favourite themes-landscapes and nudes. This painting, The Bathers, was made during Pechstein’s third visit to Nidden (Kuhrische Nehrung) in September 1912. The artist either painted the nudes on the beach or transposed them to the setting of sand dunes and scattered pine groves that typified the landscape of this area. In The Bathers, two nude female figures, shifted to the right of the central axis, appear very near the bottom edge of the painting in the foreground. Characteristically, Pechstein gave these figures voluminous, corpulent bodies. The woman seen seated on the right holds a large fan in her right hand while the nude on the left is rendered in a more relaxed, reclining position. The untouched landscape of the Kuhrische Nehrung fills the background, and a blue sky appears far off on the distant horizon. In many areas of the painting, Pechstein defined the landscape using rapid brushstrokes and tree trunks and bushes tend to be suggested rather than precisely described. Here again, we recognise the style of his earlier years, in which the artist’s attempts to come to assimilate the work of the Fauves played an important role. Here, the two nudes present a formal contrast to this spontaneous form of expression. They exemplify the mature style that emerged in 1912 and culminated a year later in Pechstein’s Cubist-style fragmentation of object forms.

Signs of Pechstein’s efforts to capture the human body as a wholly integrated formal structure are evident as early as 1911. In keeping with this stylistic shift, the nudes in this painting are precisely outlined with dark outlines. This “external” reinforcement lends them a static, inanimate quality, de-emphasising the vitality that pulses within them and subduing the effect of the round, bulging forms. The Bathers represents a point of confluence between Pechstein’s fauvist-style Expressionism and the beginning of the response to Cubism and the art of Cézanne in 1913. It is one of the last of Pechstein’s truly Expressionist works. Here, he gives the bather motif-the synthesis of human being and nature-a new and extraordinary intensity. Everything is keyed to the colours yellow and ochre-green. Even the complexion of the figures is in harmony with this dominant tonality. Only the blue of the background, which is echoed in the fan, and the flash of red, provide the necessary complementary contrasts. The oversized fan seems almost like an anomaly in this idyllic landscape setting. It is the only reminder of civilisation and culture in the painting although it does not disturb the peace of life within a context of nature. The nudes are liberated from all social constraints; they appear as inhabitants of an earthly paradise. With this scene from Paradise, Pechstein paid tribute once again to the artists of Die Brücke and their quest for originality and authenticity.