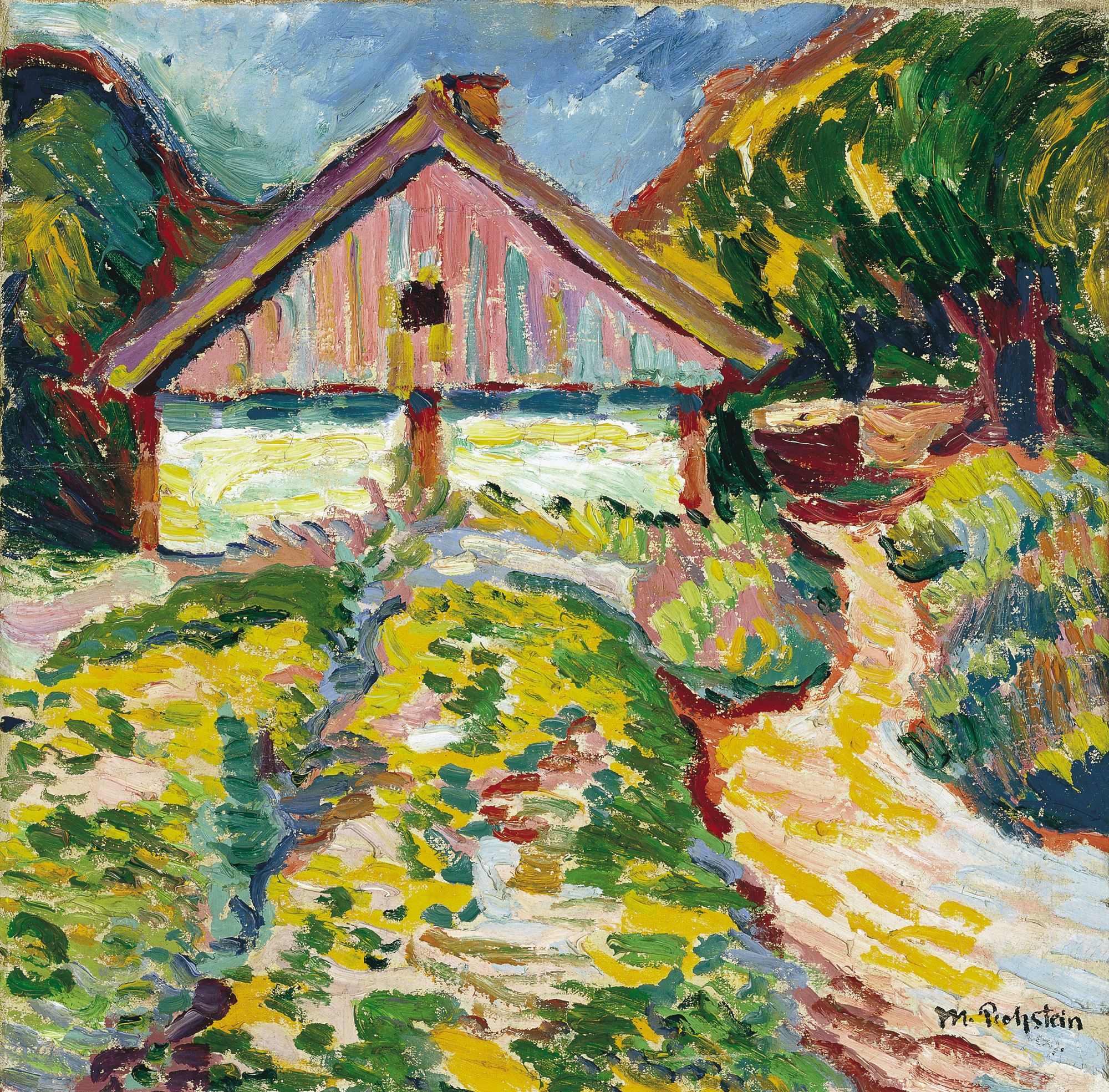 House on the Kuhrische Nehrung is one of the outstanding works produced by Max Pechstein during his stay in Nidden in the summer of 1909. When he unexpectedly sold one of his pictures at the spring exhibition of the Berliner Secession, where he had presented himself as an artist with an innovative mission, he was finally able to fulfil a long-cherished ambition. “With the money from the sale, I was able to go to the sea for the very first time and devote a whole summer to free creativity”, he recalls in his memoirs. Just as Karl Schmidt-Rottluff and Erich Heckel-his colleagues in the group of artists known as Brücke-had discovered the remote village of Dangast on the North Sea coast in 1907, so Pechstein sought out a lonely spot where he too could work undisturbed. His choice was Nidden on the Kuhrischen Nehrung in East Prussia (now Latvia). This fishing village between the Baltic Sea and the Kuhrischen Lagoon had at that point been discovered by only a few artists, most of whom were members of the Königsberg Kunstakademie. Their pictures emphasised the unspoilt nature of the landscape. It is likely that Pechstein’s attention was brought to Nidden by the accounts, and above all the paintings, produced by Ernst Bischoff-Culm, who displayed these at the aforementioned Berliner Secession exhibition. Pechstein travelled there via Königsberg, Tilsit and Heydekrug in June and remained until the end of July. He provided a detailed account of the complicated journey in his memoirs, describing the landscape and its people, writing of their lives and their work: “A wonderful landscape inhabited by people of tough character whose fishing trade has endowed them with an unique personality. After a lot of to-ing and fro-ing, I found lodgings at Martin Sakuth’s […]. He offered me a small, empty fisherman’s hut which belonged to him, situated by the lagoon. There I was able to live and work unhindered by other people. Thus it was that I was eventually able to produce considerable numbers of sketches, gradually feeling my way towards nature, the mighty shifting sand dunes and the lagoon, and thus it was that, for the very first time, I experienced the intoxicating and never-ending rhythm of the sea […]”.

It was in Nidden that Pechstein varied and consolidated the new artistic approach he had discovered in Paris in 1908. During that first trip in 1909, which was to be followed by further stays in 1911 and 1912, he primarily painted landscapes which emphasised the turbulent relief. But he also produced pictures of fishermen and portrayed the Kuhrischen houses typical of the locality. These wooden dwellings were generally painted red or bright blue and were roofed in red pantiles. The top of the gable was often decorated with a Kuhrischen cross. It is particularly in these pictures depicting the local fishermen’s huts that Pechstein applies the paint in his own interpretation of Van Gogh’s pastose style, where the German artist prefers short, turbulent brushstrokes. This is also the case in House on the Kuhrische Nehrung. The pictorial composition is inserted into a square format often favoured by Pechstein at that time.

Pechstein produces generous, masterful forms. The use of contrasts brings out the full brightness of his colours, which thereby play a decisive role in the picture, enabling foreground and background to merge together into a single unit. Although there are still elements that recall Van Gogh, Pechstein moves away from the confines of the Dutch painter’s influence to incorporate others, particularly that of thefauves, whom he had studied thoroughly in Paris and whose presence is clearly palpable here. His previously compact brush-strokes have loosened up, yielding a freer form of expression which operates through the multiplicity of daubs of colour. Pechstein creates a style which could be dubbed “Fauve Expressionism”. He achieves a lightness of touch and an unencumbered expression which is unusual in German art.

Pechstein’s first trip to Nidden was marked by this “French tone” of expression. Whereas the paintings he displayed at the exhibition of the Berliner Secession in the spring of 1909 were still to some extent caught up in the conventions of official art, the weeks he spent in Nidden were to have a liberating effect on his style. The paintings produced in Nidden are therefore not only of decisive influence in the development of Pechstein’s own style, but were also to point the way forward for contemporary German art.