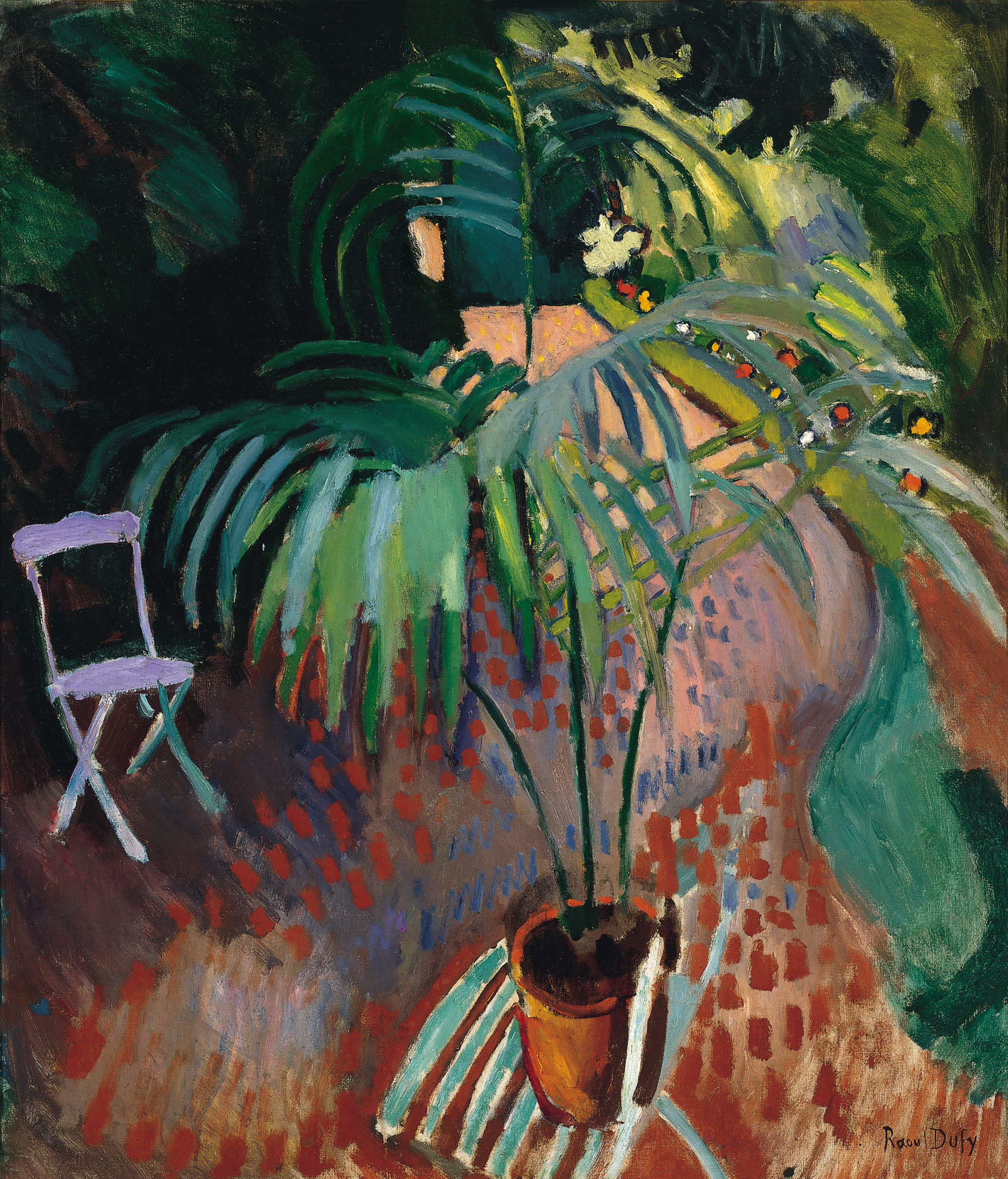 The date of Le Petit palmier has been subject of debate. In 1972 Maurice Laffaille dated it to “1905”, though in the catalogue raisonné of the painter’s works he included it in a group of paintings of interiors dated to “1907”, prominent among which is Jardin d’hiver, now in a private collection in the United States. In 1997 this similarity in theme led Pickvance to date it later, to Dufy’s trip to Marseille and Martigues in autumn 1907. However, its nuanced colour led him to state that Dufy took some time to assimilate Matisse’s lessons.

Two years later, Le Petit palmier was shown with the date “1907” in the Raoul Dufy retrospective at the Musée des Beaux-Arts in Lyon and at the Museu Picasso in Barcelona. Christian Briend suggested that Jardin d’hiver had been painted at Dufy’s parents’ house in Le Havre and shown at the Salon d’Automne of 1907 as La Serre[Greenhouse], belonging to M. Druet’s collection.

Nevertheless, although similar motifs are repeated in Jardin d’hiver and Le Petit palmier, such as the motley vegetation and winding path, the style of painting is very different. Whereas the former is notable for the predominant contrast of blues, greens and lilacs in an essentially two-dimensional arrangement, the latter has a marked funnel-like perspective with powerful chiaroscuro contrasts and small touches of colour inherited from neoimpressionism. These differences led Fanny Guillon-Laffaille to rightly move its date back again to “1905”.

Despite the difficulty of establishing a certain date for Le Petit palmier, it seems most likely to be “c. 1906”. Indeed, Le Petit palmier is not related so much to the group of paintings of interiors executed in 1907 as to three slightly earlier canvases on a similar theme: Dans le jardin au Havre, c. 1906; Dans le jardin, c. 1906; and Le jeu d’échecs, 1906. The indoor garden setting is the same, as are the folding chairs (which differ from those featured in the 1907 paintings). But there are further elements in common, for example the contrasting chiaroscuro between the foreground motifs and the surrounding vegetation, and the solid masses of certain objects such as the table and the flowerpot. Unlike from the summer of 1906 onwards, here Dufy does not yet outline forms with thick dark contours but juxtaposes tones instead.

But these are not the only elements that link Le Petit palmier to around 1906 in the painter’s career. The mosaic brushstrokes found in the canvas in the Carmen Thyssen-Bornemisza Collection can also be seen in other paintings produced that year, such as the aforementioned Le Bal champêtre à Falaise (private collection) andL’Estacade du casino Marie-Christine à Sainte-Adresse (Milwaukee Art Museum), whereas they disappear following the adoption of large colour planes in the summer-autumn of 1906.