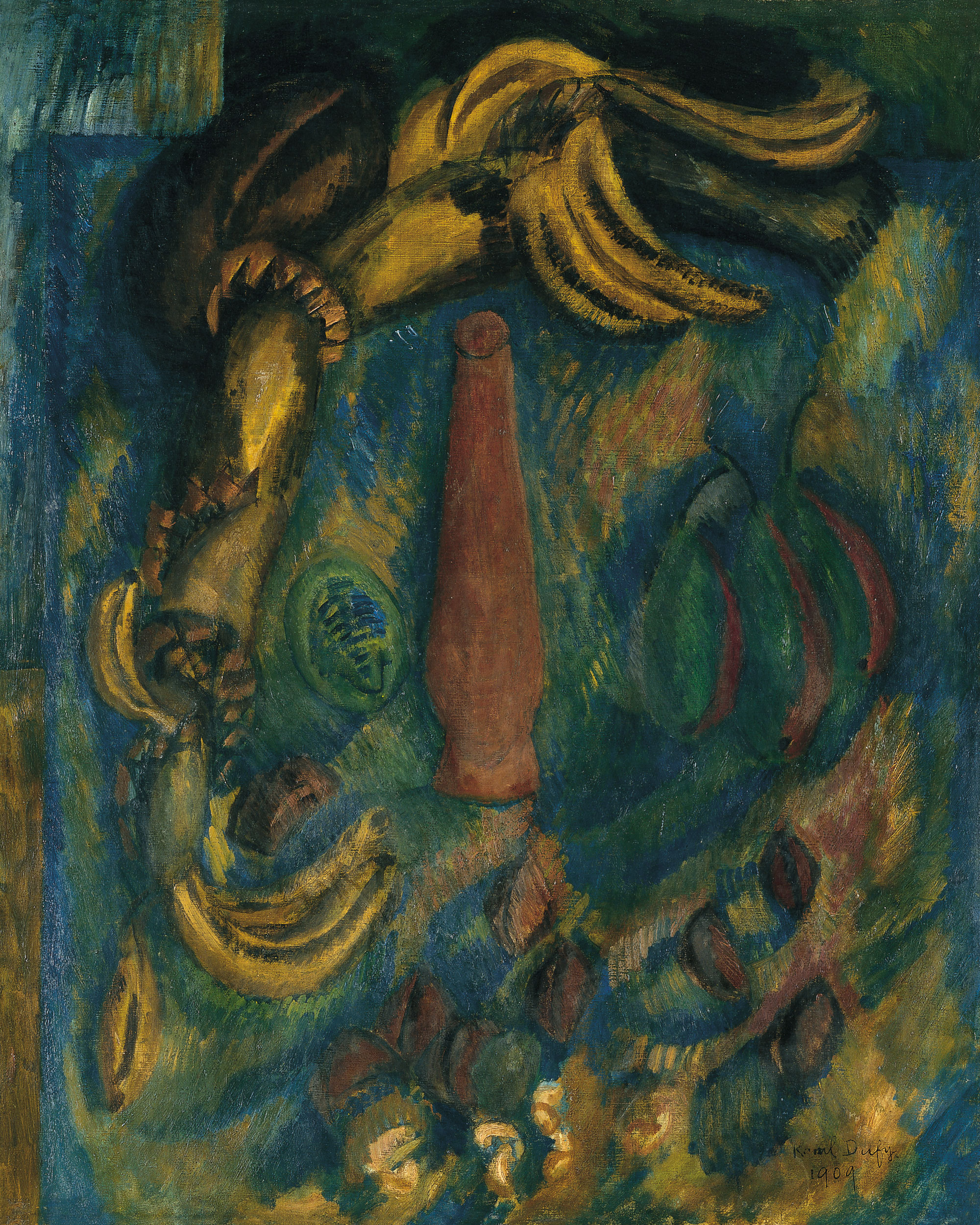 An important retrospective exhibition of Cézanne’s oeuvre, which was to mark a new phase in French and European painting, was held in the Salon d’Automne of 1907, where Dufy exhibited three paintings. As a consequence of it, many of the artists who were involved in the fauvist movement, such as Derain and Braque, attenuated their chromatic frenzy and turned to the master from Aix in search of a new accent in the construction of forms and pictorial space, thus opening the way to cubism. Dufy too shared this spirit for a while. In the spring of 1908 he travelled to l’Estaque, near Marseille, to the scenery which had inspired Cézanne for some of his most memorable paintings. And there, shoulder to shoulder with Braque, he painted a series of landscapes with angular and geometrical forms. In his series of paintings of trees executed in l’Estaque, the pictorial space is structured architecturally in superimposed planes, framed by the trunks, painted at an angle to form arches. The parallel diagonal brushstrokes convey a dynamic balance to the fusion of geometrical shapes. Dufy had abandoned the colourist euphoria of his fauvist period, and limited himself to a sober range of greens and ochres. Dufy’s Cézannian period lasted until 1915; in any case, the painter did not follow Braque on his way to Cubism.

Between 1909 and 1910 Dufy painted a series of experimental still-lifes, eight of which stand out. The main subjects of these are bananas, sometimes accompanied, as in this case, by the phallic figure of a pestle. Some details of these paintings recall Cézanne, in particular the tendency to avoid the Renaissance perspective, paying attention only to the requirements of the pictorial plane. In this painting the viewpoint is high-a characteristic of Cézanne’s-and tends to flatten the volume of the objects. The objects observed from different points of view are placed on the same plane, like in a heraldic composition. But the influence of Cézanne is modified by an impulse of a different nature. The tapered, ogival forms have a gothic air about them. The parallel traits reveal a strange agitation. The resulting style has little to do with the classical-constructive trend of the majority of Cézanne’s followers, and recalls rather the syncopated movement of Expressionism, like that of the painters from the Brücke group. In December 1909, Dufy moved for a period to Munich, invited by the German painter Hans Purrmann, one of Matisse’s first followers. In Munich, where his friend Othon Friesz, who had settled in the Bavarian capital a few months earlier, was expecting him, Dufy visited the Van Gogh retrospective exhibition in the Brakl gallery. In the few paintings he executed in that city, he drew closer to the evolution of German art. This may be the reason why Herwarth Walden, the founder of the Berlin gallery Der Sturm, exhibited in 1912 some works by Dufy from that Cézannian period.