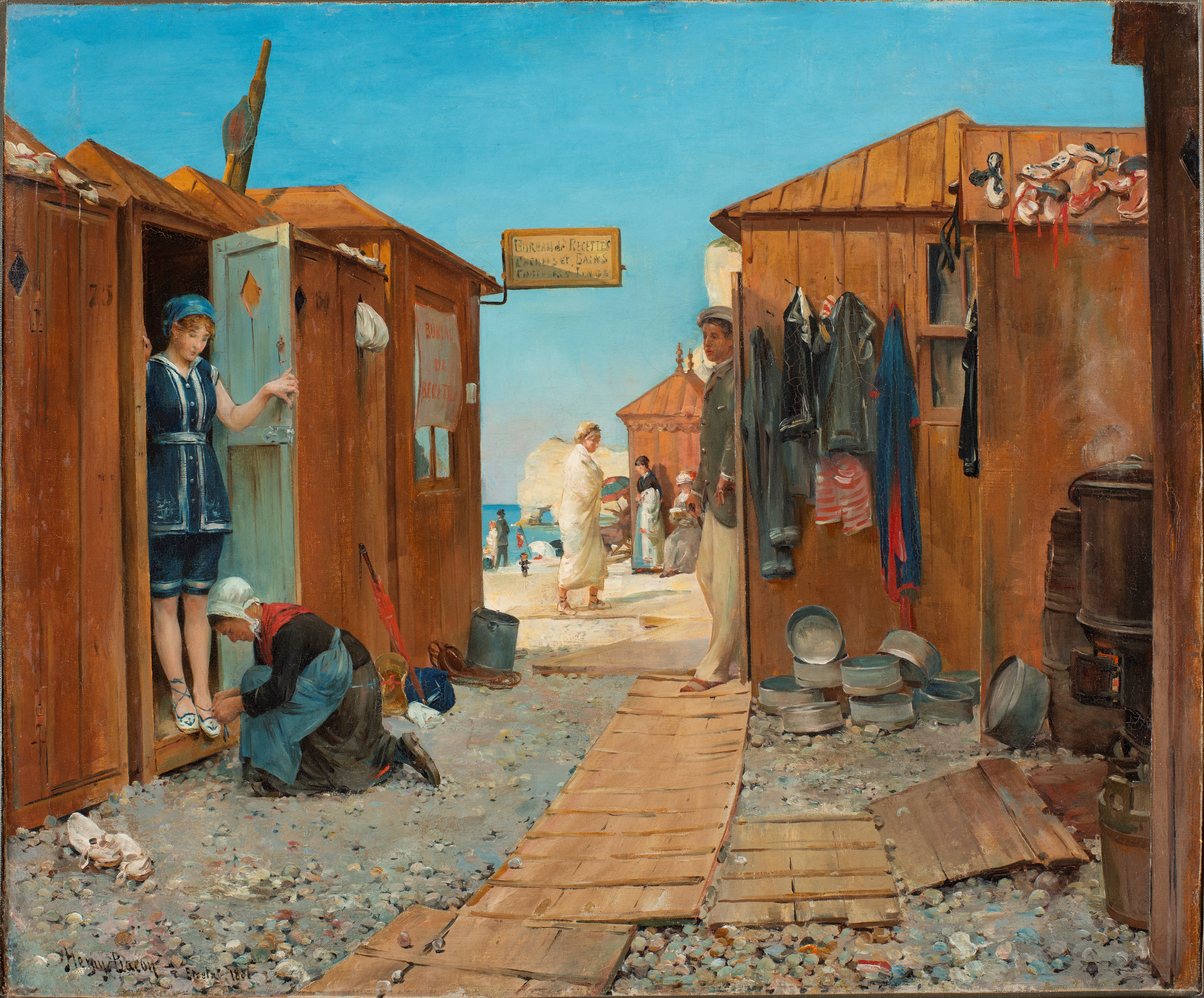 The American painter and writer Henry Bacon served as a soldier in the Massachusetts infantry during the American Civil  War, and he worked as a field artist for the illustrated newspaper Leslie’s Weekly. He subsequently moved to París in 1864 with his first wife with the aim of studying painting. He was admitted to the École des Beaux-Arts in Paris where he was a student of the French painter Alexandre Cabanel. During this period, he travelled to the coast of Brittany in France and became fascinated by the landscapes of Pont-Aven. During these years, he maintained contact with several French artists of the late 19th century, and in 1883 Henry Bacon wrote the book Parisian Art and Artist (1) based on his contacts with these painters and his travels around France.

Around 1880 he travelled to Étretat, a village on the French coast of Normandy. Attracted, like many other painters such as Courbet, Boudin or Monet, by its coastal landscapes, he painted a series of pictures of this place. His time in Étretat is also remembered in another work that the painter wrote in 1895 under the title Étretat, Hamlet of the Setting Sun: A Norman Village and lts Surroundings (2).

The work Beach at Étretat, which  was painted in 1881, belongs to this period. Unlike the series of landscapes and cliffs of Étretat painted by Boudin or Monet, Henry Bacon focuses on representations of the local people: fisherfolk, washerwomen and holidaymakers on the beach. Other works of his that follow the same theme as the painting we are concerned with here include: Fisherfolk Returning with their Nets, Étretat, Washerwomen  on the Beach, Étretat, A Fisher Girl of Étretat, France and Étretat as well as some others (3).

In the work from the Carmen Thyssen Collection Beach at Étretat, the painter opts not to represent the endless coastal landscapes of Étretat but chooses instead a more specific area of the beach, a part that is secluded, almost hidden, although quite close to the sea: the wooden cabins situated near the beach that were used as dressing rooms for summer visitors. In the foreground of this work, we see a wooden pathway placed over the sand and stones of the beach, and there are a number of wooden cabins arranged on either side of this pathway. We also see a maid who is kneeling as she ties the shoes of a young lady. Both women are being observed by a gentleman from the cabin opposite. Several garments, shoes and other belongings hang from the exterior walls of the cabins. In the centre we can observe some more cabins on the beach, some holidaymakers under their parasols and a woman who appears to be wrapped in a towel that stands out thanks to its white colour. In the background, we can see part of one of the natural arches of the cliffs of Étretat. Even though there are many brown, reddish and grey colours in the pictorial palette, what stands out is the brilliant blue colour of the sky, which is undoubtedly the real protagonist of the work.

Some years later, Henry Bacon abandoned this type of coastal theme and he left oil painting to one side after 1897. After his first trip to Egypt, he devoted himself to painting watercolours of city views. Part of this collection of watercolours is currently kept at the Smithsonian American Art Museum in Washington DC.

(2) Bacon, H. Étretat, Hamlet of the Setting Sun: A Norman Village and Its Surroundings, Bretano´s, 1895.

Figures on the Beach in Trouville

Étretat. The Cliff of Aval