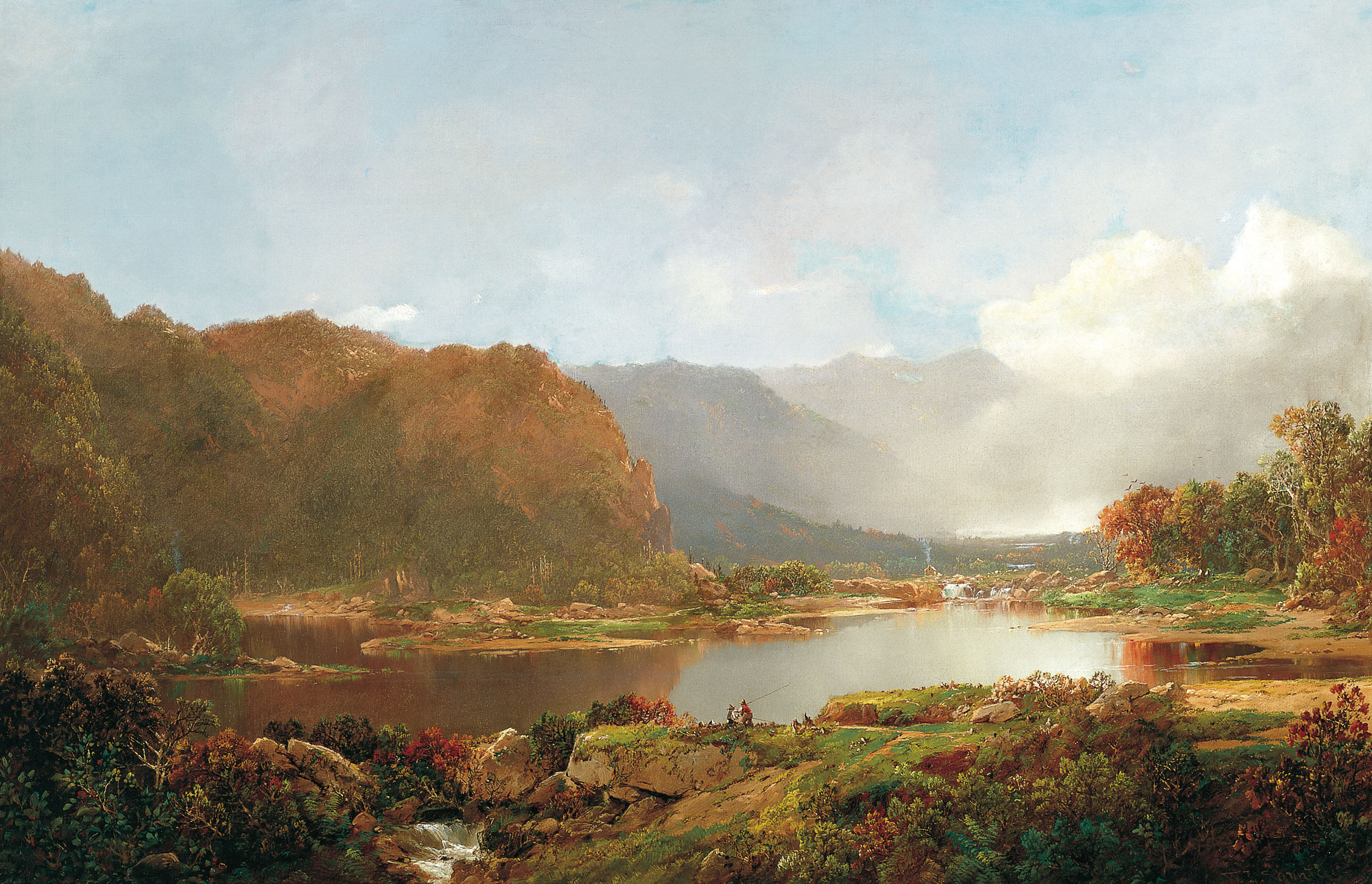 When William Sonntag set up a studio in New York in 1857, the Hudson River School was at its height, and he not surprisingly fell under its influence. Following Thomas Doughty, Thomas Cole, and Asher B. Durand, the Cincinnati artist conveyed a belief in the wonder of nature in idealised views: grand sweeps of landscape done in detailed brushwork. By the 1860s he reached the peak of his powers and maturity in what has been called his “classic phase”, exemplified by Fishermen in the Adirondacks. Working in a large, panoramic format he created a number of scenes that correspond to a Claudian composition: a central body of water is flanked by trees at left and right and a hill behind. They go by titles that indicate regional identity. In truth, however, there is little to distinguish them in terms of geographic specificity but the character of the hills or the configuration of the body of water: in the Adirondacks, lake scenes and angular peaks; in the White Mountains, serene silhouettes; and in numerous Catskill paintings, the famed Hudson. And he almost never portrayed a specific peak or other landmark, as did most of his contemporaries. Rather these pictures are intended to evoke a particular state of nature, not a place. Raised in Ohio, Sonntag was acutely sensitive to the balance between man and nature found on the frontier, which he signified by a variety of formal motifs found in this picture.

On the far shore of the scene there appears a log cabin with a curl of smoke, the primary symbol of man’s encroachment into the wilderness. It appears in a clearing marked by ax-cut stumps, a frequent landscape motif which Barbara Novak has interpreted as an additional reference to man’s conquest and settlement of the land. What became Sonntag’s signature symbol is the figure of the fishermen, prominent here on the rocky outcropping along the lakeshore in the central foreground. One stands and the other sits and holds a long fishing pole. These stock figures, which populate a large percentage of his panoramas, provide a key to the meaning of his landscapes.

When Sir Isaak Walton’s enormously popular book The Complete Angler came out in an American version, its editor Rev. George Bethune clarified its terminology: “an angler, kind reader, is not a fisherman, who plies his calling for a livelihood, careless in what way he gets his scaly rewards.” Similarly, Sonntag’s figures are not struggling to catch enough fish to eat, or to earn a living; instead they take their recreation. Angling is meant to soothe, to refine. The figures stand with their backs to the viewer, contemplating the glories of the peaceful landscape, and communing with one another through this encounter with nature. The viewer’s study of the canvas, in turn, is meant to evoke a similar chain of responses.