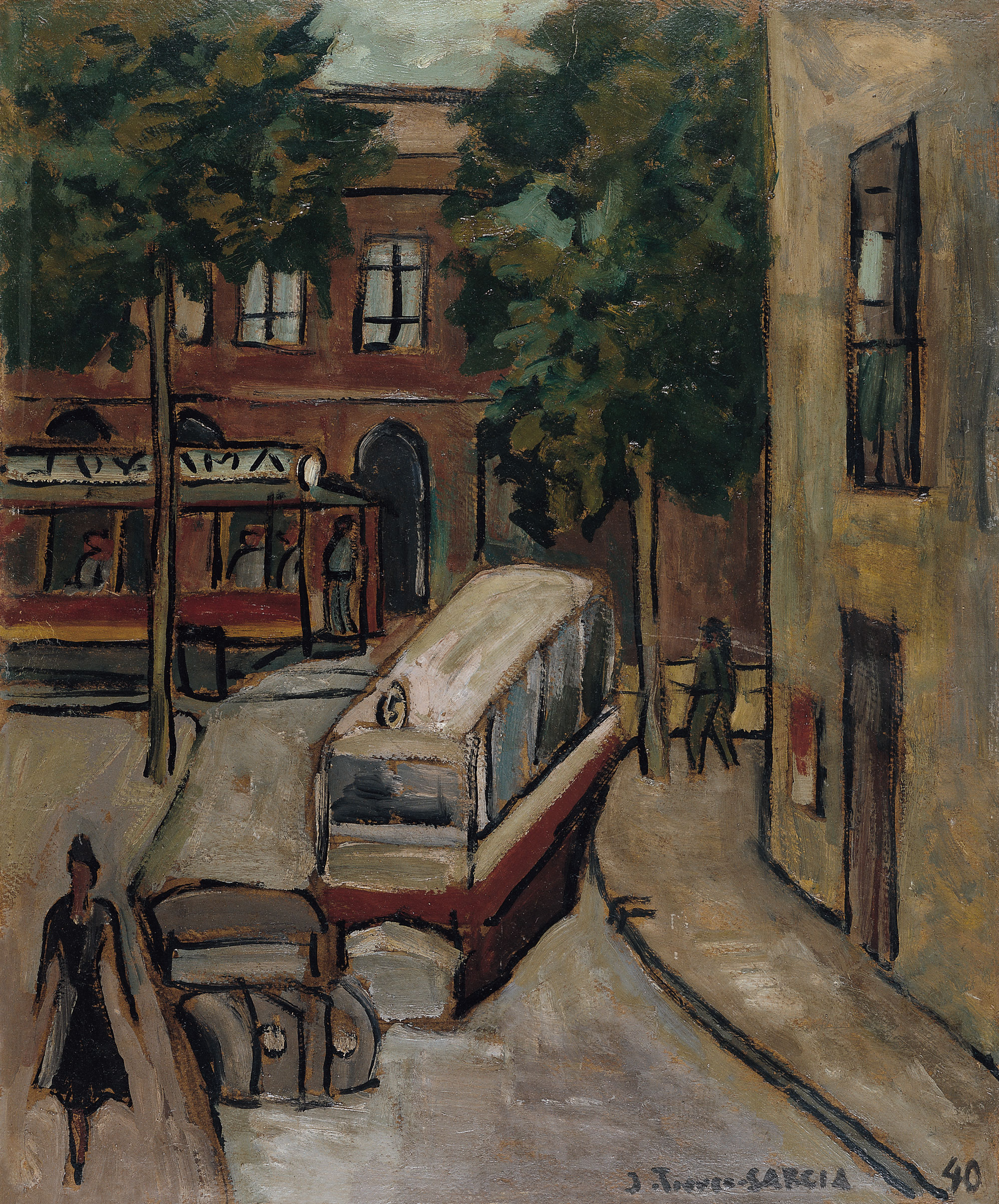 There is a style typical of Torres-García, well defined and immediately recognisable, more or less evident depending on the work and on the period, linked at the same time to different pictorial techniques, to an imaginative world and to a very particular conception of details which he expressed in the following words in Historia de mi vida (The Story of my Life, 1939), using the third person to speak about himself: “He began to paint in a simple way. He painted anything. Everything seemed interesting to him: a fragment of an object, bits of land, a sky, the angle of a door, the faÃ§ade of a house. From there he moved on to locomotives, ships, harbours, streets, shops and factories, all in the context of a great modern dynamism. He provoked astonishment”. In his production, the most recurrent themes, like that of the urban landscape and certain solutions to artistic problems, sometimes reappear for a brief period. In the Parisian paintings of the years 1928-1930, the artist depicts a faÃ§ade, the outline of the roofs, the chimneys. The city is recognisable only thanks to signs in French, like “Tabac”, “Bière”, “Épicerie”, and Montmartre can be identified by some steps or some gas street lamps. In 1934, when Torres-García decided to return to Uruguay after forty-three years of absence, it was the urban transformation of the capital which made a pleasant impression on him, as he recalls it in hisUniversalismo constructivo: “When I arrived in Montevideo, I was very pleasantly surprised to notice the extent to which the aspect of the city and of its inhabitants had changed. This, I said to myself, is a modern city, involved in the exciting life of our times and which, except in its size, has nothing to envy from other large cities. Imagine my happiness!” More theoretician than ever, he pursued his exaltation of abstract art begun in Paris in Cercle et Carré through various lectures, many publications and the formation of a group of artists with whom he founded, in January 1935, the Association of Constructive Art. However, the art of Torres-García’s last period was not exclusively constructive. In order to escape a little from the rigour of abstraction, he went back now and again to styles abandoned many years before, or he dedicated himself to stylistic practice, a kind of “break”, as he once told Claude Schaeffer, or a “holiday” which he allowed himself in order to rest his mind from strict theories. Thus, he happened to paint landscapes like the one being analysed here, not painted from nature, but in his studio, from a sketch or from previous works: views of the main cities linked to his oeuvre, Paris, Menton, Villefranche-sur-Mer, Livorno, Bruxelles, or the countryside around Barcelona. His aim was to shed his habits. He had expressed this idea in a type of manifesto entitled Art-Evolution, published in the only issue of the review Arc-Voltaic (February 1918): “According to our point of view, there is nothing definitive. We must ignore what we will do tomorrow-We have to place in the background the work that comes out of our ability to choose, in order to abandon ourselves to spontaneity, to intuitive notions, to a state of sympathy with the real world. We have to identify ourselves with everything in order to truly know things”.