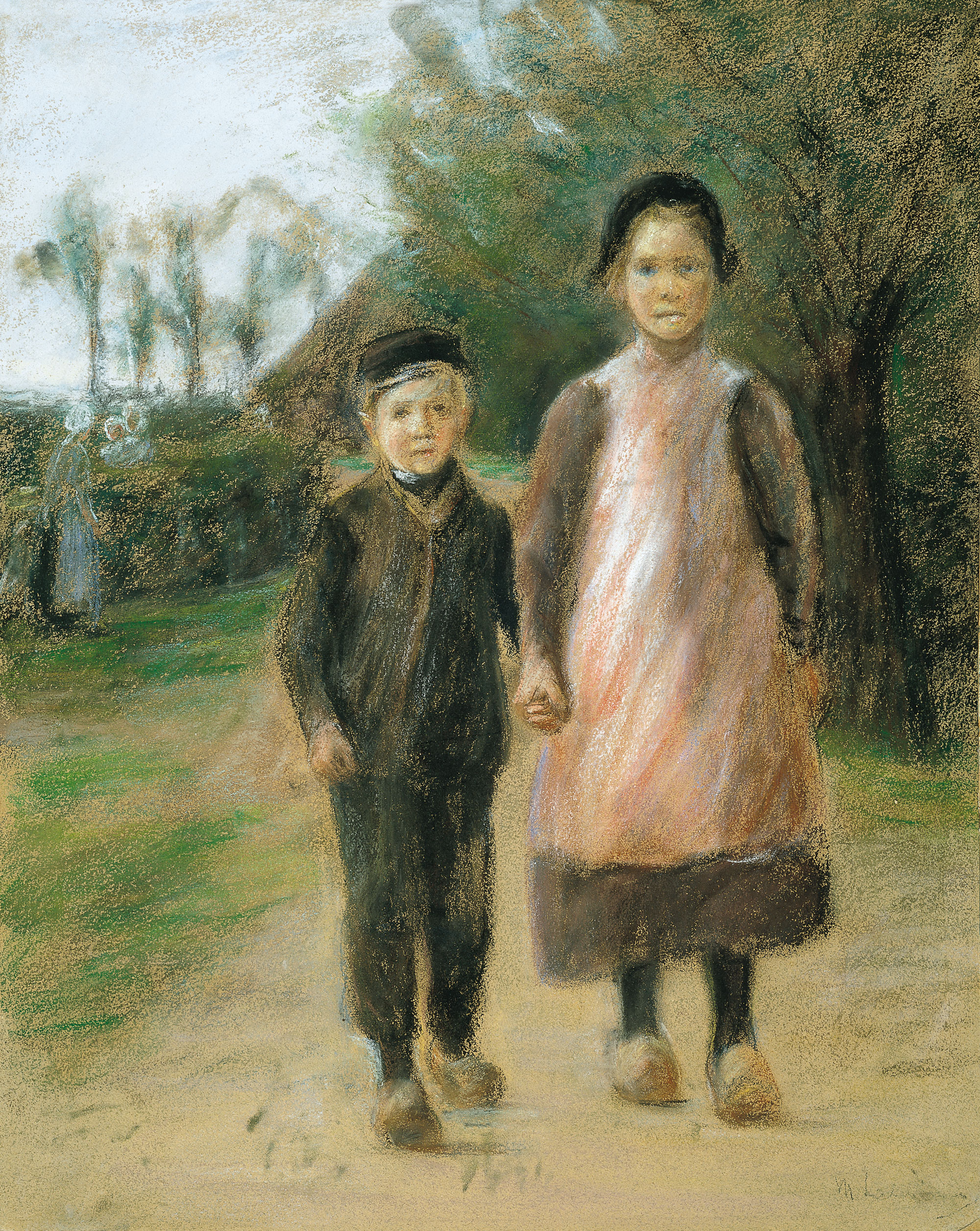 In the summer of 1897 Liebermann pursued his studies in Laren, a small village in Holland, in preparation for a painting entitled On the Way to School in Laren. Erich Hancke, a friend and biographer, described the place:«The village is still unusual even for Holland. It lies not far from Zuiderzee, perhaps a two-hour walk away, in flat moorland, and its primitive wooden houses are hidden in the gardens and under the elms growing in many rows along the paths to such an extent that the whole looks almost like a copse. The people there also have a special appearance, the girls are striking in the form, delicacy and porcelain-like quality of their faces.»

The girl in this pastel wears school clothes: a brown skirt with a red apron, dark stockings and clogs. She obviously poses for the painter with her little brother. Their seriousness and composure comes from being the subject of a painting and the fact that they are also on their way to school. The children live in a protected environment: in the background we see a house and women in local costumes chatting. A newspaper photograph of 1899, which shows Liebermann´s studio in Berlin, includes a smaller version, now lost, of this painting.

After a course of study in Weimar, Lieberman first went to Paris. He was interested in the Barbizon school of painting, especially in François Millet. However, after the Franco-Prussian war, Millet refused to have any dealings with Germans and Liebermann never really felt that he was welcome there.

In Holland, however, Lieberman felt immediately at home: the wide landscape under a high sky generally dotted with bright clouds, the friendly people, and the orderly communities touched a profound chord with the painter. With a study visit in 1876, he began his almost yearly journeys to Holland until the outbreak of World War I. In 1884 the Dutch-Jewish painter Jozef Israëls, a friend of the Liebermanns, introduced the couple to the small artists´ village of Laren on their honeymoon. In 1886 the painter Jan Veth drew his attention to flax spinning there, prompting the creation of one of Liebermann´s great paintings, Flax Barn in Laren (National Gallery Berlin).

In the summer weeks of 1897 and 1898, the artist was again in Laren. In the meantime his interest had turned towards exterior space. A decisive change of direction towards plein air painting and atmosphere, the phenomena of light and air and their influence on colour is unmistakable. Liebermann paints the soft, always rather hazy light in this region, surrounded and crossed by water. He paints peasant women on flat paths, women sewing in front of their house, children playing in the street. They are part of the cultivated scenery, the village environment, they stand «[…] facing nature with a sense of intimacy and piety.»

Liebermann did not turn to pastel until the end of the 1880s. He used it for rapid, coloured nature studies or to test the structure and effect of the paintings he had in mind. Between 1890 and 1898 he produced numerous pastels.

The Flax Barn in Laren received the First Gold Medal in Munich in 1887, but it was not until 1897, on his fiftieth birthday, that he was honoured with a sumptuous extraordinary exhibition.

Highly comparable attempts were pursued by the Galerie Cassirer founded at the same time as the Secession in Berlin. Its exclusive rooms were inaugurated with three small groups of paintings with works by Liebermann and the Frenchmen Constantin Meunier and Edgar Degas, whose pastels Liebermann greatly admired. At Cassirer, Liebermann showed his most recent paintings, among them On the Way to School in Laren, a work very much in the spirit of the times. In a review by Rainer Maria Rilke on Liebermann´s contribution, the poet wrote: «He appears to grow towards brilliant, literally-conceived Impressionism which unfolds in lavish colour across the whole surface.»

The Artist´s Granddaughter with the Governess in the Wannsee Garden