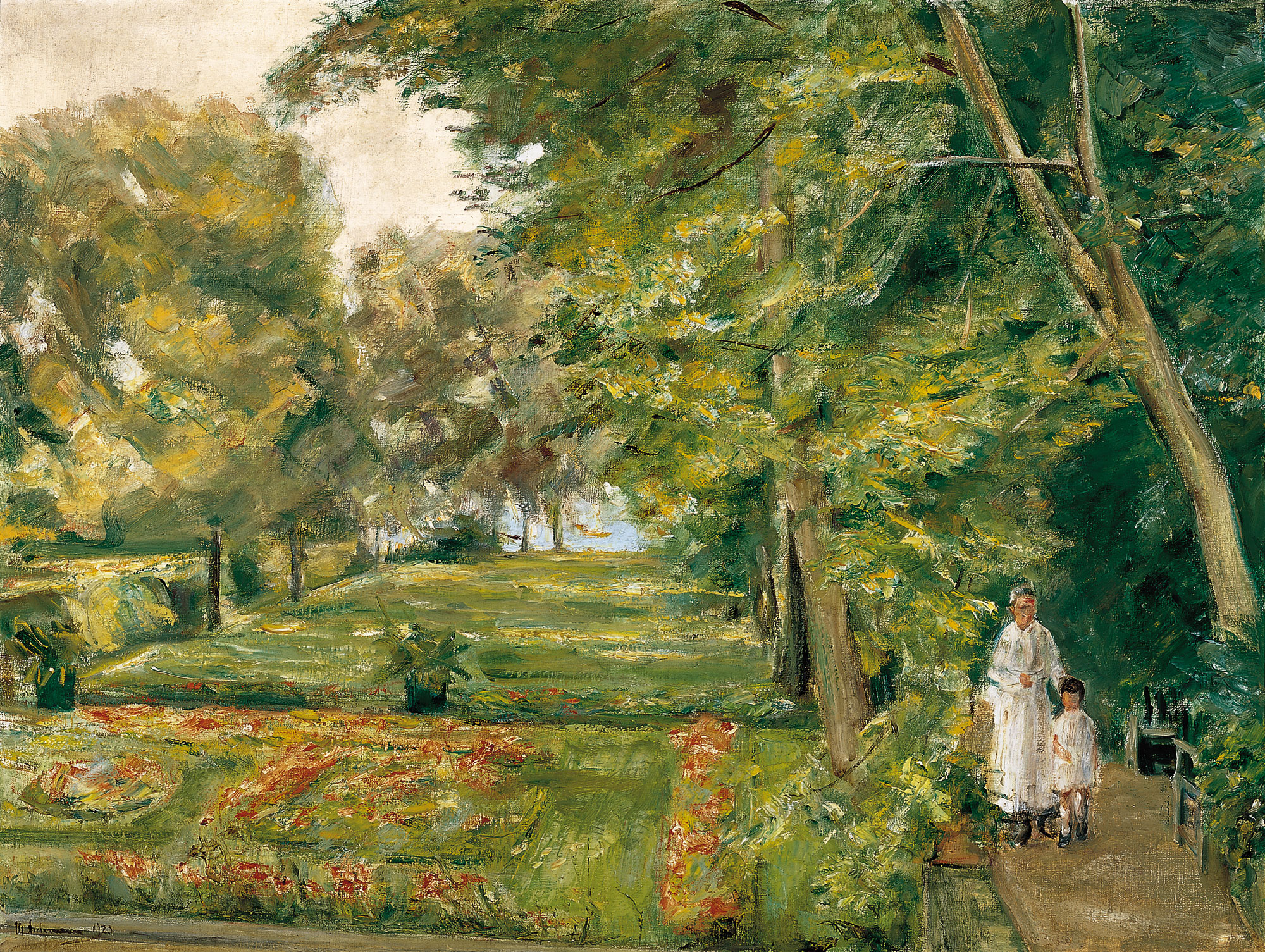 The Artist´s Granddaughter with the Governess in the Wannsee Garden, 1923

Liebermann’s unique garden on Lake Wannsee near Berlin is the key subject of his later works. The painting shows the view from the house over a large lawn to the lake. This view into the garden transmits generosity, amplitude and cheerfulness. There is little shade, no loud contrasts, and no drama. A surprising lightness in colouring prevails, a symphony in green hues, brightened by the red of the flowers and the white dresses of the artist’s granddaughter Maria and the governess who come up the path. The painting was based on preparatory drawings and was also realised in print form.

Max Liebermann, a sober and reserved man from an upper-middle class family, a politician devoted to culture and education, repeatedly painted his wife, his daughter Käthe and later in life his granddaughter Maria with great warmth. He observed, painted and drew the latter’s development with the same sublime tenderness as that he had expressed when his own daughter grew up thirty years earlier. In 1923 Liebermann produced a particularly large number of representations of his granddaughter. In March Maria celebrated her sixth birthday and probably spent an especially long summer on the Wannsee that year. This motif of the granddaughter, the child in the garden, was an important new subject for the ageing Liebermann.

Liebermann bought the property, situated in a prosperous residential colony, in 1909. He had a villa built there in the typical style of Hamburg country houses. Advised by his friend Alfred Lichtwark, director of the Hamburg Art Gallery, he began to create a carefully planned garden. As with other reform-minded artists and architects around 1900, Lichtwark had developed ideas for gardens in keeping with the time. Together, artist and designer laid out a marvellous painter’s garden, with clearly defined and differently used spaces connected by multiple paths and perspectives.

Lichtwark also published popular texts about the new art of landscaping. In his book Makartbouquet und BlumenstrauB he describes an acquaintance, who may well be Liebermann, to whom he is showing the traditional garden of a marshland farmer: “If I were to have a villa built at home […], I would have a garden laid out like this. I would send my gardener here so that he would learn something. […] So we sat there and took pleasure in the well preserved construction of the age-old artistic tradition in front of us. My friend made a frame with his hands before his eyes and tried the motifs for painting as painters do. ‘A hundred paintings could be painted here’, he said, ‘each one more beautiful than the last’.”

The purchase of the property at the city gates of Berlin came at a time of problems for the artists’ association Berliner Secession, of which Liebermann had been president since its foundation. In 1910 the Secession rejected paintings by the Expressionists. As a consequence, some of the younger artists left the association and founded the Neue Secession. The painter Emil Nolde violently attacked Liebermann in an open letter. In January 1911 Liebermann resigned from the chairmanship of the Berliner Secession and in so doing acknowledged the efforts of a new generation to gain recognition.

At this stage of his life Liebermann became more and more independent of artistic developments. The numerous garden paintings of the 1920s by the elderly artist can no longer be classified stylistically as obviously Impressionist. In 1929 the artist, who had come into contact with Baruch Spinoza’s pantheism in his youth, wrote in a Jewish newspaper: “Born to see, all my ideas are based on experience. Spinoza’s ‘deus sive natura’ comes closest to expressing my philosophy.”

Boy and Girl on a Village Street