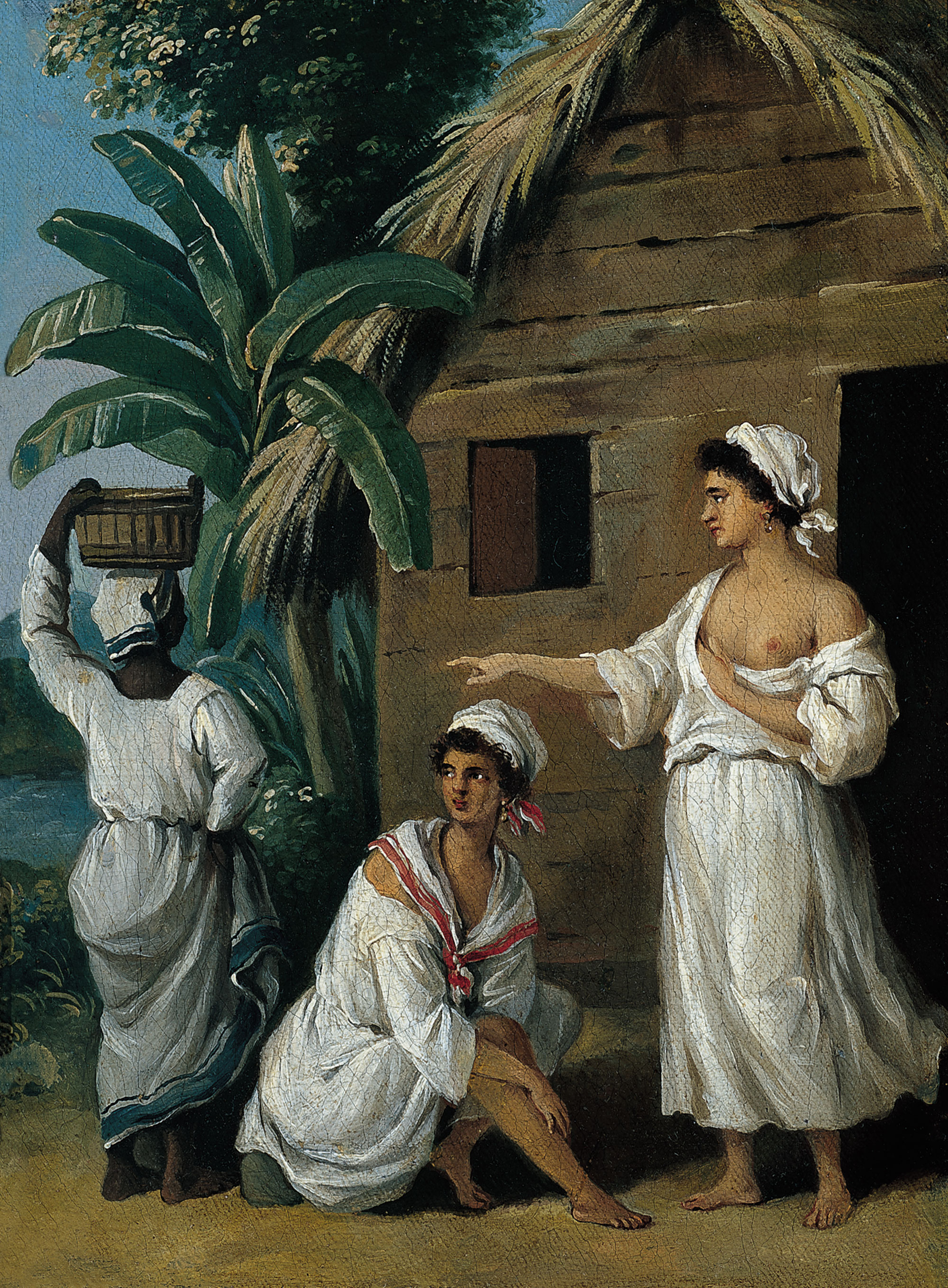 The Caribbean genre paintings by A. Brunias are frequently organised in pairs or series, and that is how they have appeared on the art market. E. T. Hamy, a collector of ethnographic engravings and of paintings and prints by Brunias, to whom we owe the first studies on this painter, observed the correspondence between images which formed matching pairs, a thesis corroborated by Brunias’ own set of prints from his paintings, made to form series, as is the case of the engravings he published in London in 1779 and 1780. In addition, a large number of his works are of a small size and maintain the same format, which may suggest that they were meant to form pairs or decorative sets for colonial and metropolitan mansions. That is also how they have appeared on the market. One of the first collections of works by Brunias of which we have knowledge was that of William Young, the son of the governor of Dominica and later himself governor of Tobago, who owned a series of eight paintings with genre scenes. These were auctioned at the Peter Coxe Hall in London on 20 May 1802. The six works analysed here were not originally a series, although four of them, Creole Woman and Servants, Three Caribbean Washerwomen by a River, Caribbean Women in front of a Hut, and Two Caribbean Women Returning from the Market belonged to the same collection, that of count Rosebery. Also Caribbean Women in an Interior, San Vicente was part of a set of sixtableautins by Brunias which belonged to the Dudley Wood collection. The costumes and customs genre painting that Brunias developes can be generally related to the 18th century category of popular prints also know as Cries which were usually presented as albums.

For his works, Brunia frequently used the small vertical format of all the works in this set. In addition, the scenes represented in them have the same typology, so that from a relatively limited repertoire of themes and figures, all of them belonging to the Caribbean colonial idiosyncrasy, we can find many variations. The Fogg Museum in Boston, for example, has a pair of works by Brunias, Creole Woman Buying Fruit from a Young Black Woman and Black Bathers, which are closely related, in their theme and composition, with the paintings of the Carmen Thyssen-Bornemisza Collection Three Caribbean Washerwomen by a River and Two Caribbean Women Returning from the Market. Another similar scene with bathers entitled Caribbean Washerwomen in a Landscape with River was auctioned at Christie’s in London in April 1977.

Apart from the fact that the repertoire of genre scenes is limited, in Brunias’ oeuvre, to a series of recurrent themes, there is in his work a clear attempt to characterise the different human types, according to their race and tasks. His art offers a colourful collection of racial types, with a variety of habits, social standings, clothing and hairdos. This is an important aspect of Brunias’ interest in categorisation, comparable to what, shortly before, Miguel Cabrera did in Mexico in his paintings depicting people from mixed races. A distinctive factor of these paintings by Brunias is the balanced relationship between the different social strata gathered in his works. Furthermore, it was his emphasis on the human equity among people of different colour and his attention to the true physiognomy and consequent restoration of the dignity of servants and slaves, that may have led Hamy to declare that in Brunias “the black types and identities, closely observed by him, are reproduced with an almost scientific exactness”. Hamy’s evaluation is uncertain, since the characters portrayed have not been identified, although there is a clear attempt to establish typological differentiations without distortion and, consequently, an objective characterisation of the different races. And as the painter uses the skills acquired in his study of the classic tradition, and therefore frequently depicts his characters, of whichever social standing, in positions typical of the classical visual language, he adds dignity to the representation of servants. This idealised painting of colonial genre scenes won great prestige as anti-slavery iconography. Hamy himself observed how Brunias’ representations of black people were at the root of the propaganda in favour of manumission during the years of revolution. The Cooper-Hewitt National Design Museum in New York has five buttons from a jacket belonging to F. D. Toussaint Louverture, the leader of the anti-slavery rebellion in Haiti and governor of the French colony under the revolutionary regime between 1796 and 1802. The buttons are decorated with miniature paintings reproducing works by Brunias.