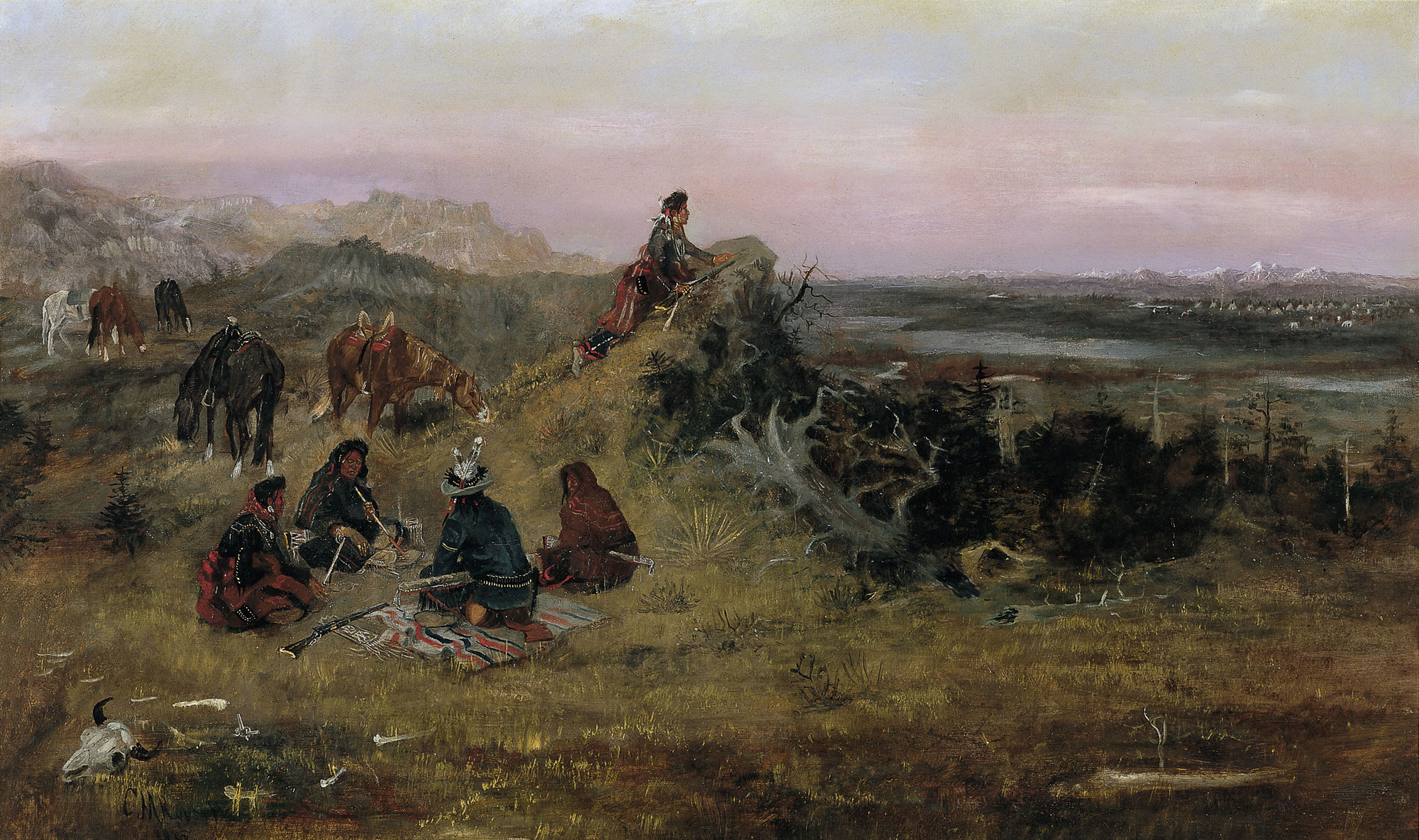 The Piegans preparing to Steal Horses from the Crows, 1888

This outstanding early painting by Russell depicts a Piegan raiding party preparing for a dawn foray against their traditional enemies, the Crows. Although under the jurisdiction of the US Indian Bureau and the Indian Police, renewed hostility between the tribes had broken out in 1887, when the Crows moved north in a series of attacks across the Yellowstone River. The Piegan (one of the three Blackfoot tribes) retaliated with horse raids carried out by small bands of volunteers eager for both revenge and personal status. The open grassy plain studded with buttes and the distant snow-covered mountains suggest the landscape of the Crow reservation in southeastern Montana.

Russell had spent the winter of 1887-1888 with the Blood Indians, another Blackfoot tribe, on the Canadian border, and in The Piegans Preparing to Steal Horses from the Crows he accurately depicts their pipes, coup sticks, feathers and bone ornaments, and the red-earth paint on their faces. Plains Indian culture was highly regimented, with a complex system of honours and sacred symbols obtained in dreams and activated by use and red-earth “seven paint”, which gave order to their nomadic life as hunters. The modesty and mobility of their sacred objects reflected, as Ralph T. Coe observed, their “fragile relationship with space, the creator, and with their disciplined world”. It was a relationship that captured the imagination of the young artist. His sensitivity to Blackfoot spiritual life is evident here as he shows the warriors’ ritual preparation for the raid. As an early observer reported, “Each serious act […] was preceded by […] formal smoking.”

The figures of the Indians and horses are carefully rendered and stand out in sharp focus against the thinly painted background, producing are as of abruptly ambiguous space (not unlike Degas’ landscapes) charged with a feeling of impermanence. Russell was self-taught and his work always reflected the conceptual, linear touch of the primitive, but rarely to such expressive effect as here. The handling of light and colour is also remarkably subtle, particularly in the delicate tones of the sky and the touches of red against the dark landscape.

Russell inscribed the painting with the buffalo skull, which appears in many of his early works. It was an ironic symbol, for it suggested not only the destruction of the vast herds that formed the basis of Plains Indian life and freedom but the eventual disappearance of the open range that had drawn him West in 1880.