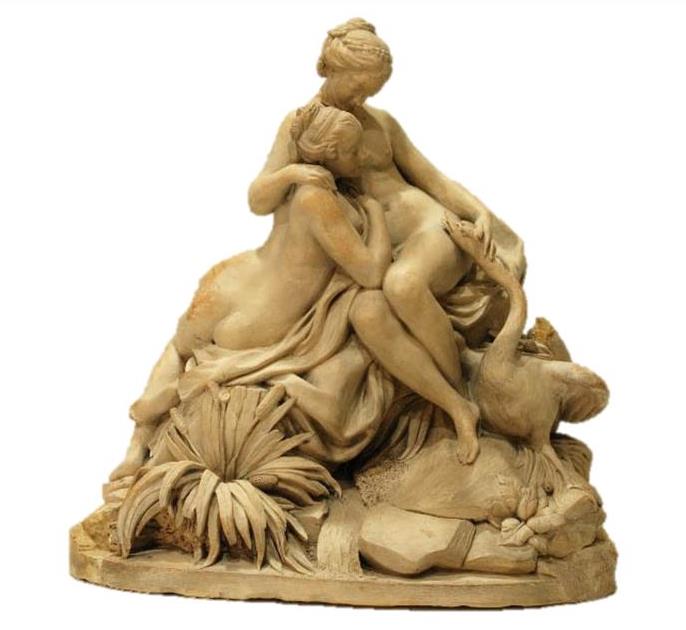 The nude Leda reclines on a rock, part of which is covered in drapery and plants; with her left hand she caresses Jupiter in the form of a swan, while her right hand rests on the shoulder of a nymph who reclines beside her. The group appears to have been modelled, rather than cast, and the impression of the board used as a support is visible on the solid underside. The front edge was apparently added after the rest of the group was modelled, but before firing. The piece is in generally good condition. It has, however, suffered certain minor losses (particularly of the reed ends of the group of bulrushes at the front, and of the branch sprouting from the trunk at the back) and a section of the base at the left-hand end, below the nymph’s left foot, has been repaired in composition or plaster; this last area of damage extends along part of the back edge, where the ‘sponged’ texture is interrupted and the leaves of a plant have been broken off to reveal the combed marks of a modelling tool. The head of Leda has been broken at the neck and repaired. A later wash covers all the surfaces, including the breaks and repairs. A thermoluminescence test carried out in 1991 indicated that the piece was fired between 200 and 400 years before testing (that is between c.1591 and c.1791).

The group was first published by Feulner as a later reproduction of a composition by Falconet. This is known in the form of a Sèvres biscuit group, the model for which was produced by Falconet around 1760. Between 1757 and 1766 the sculptor was directeur des trasvaux de sculpture at Sèvres, working closely with Boucher. The Leda is among many models apparently executed by him or at least under his close supervision during this period, and the poses and facial types used for the female nudes here follow a pattern used frequently in the small-scale marble sculptures by or after him. Some of the Sèvres compositions associated with Falconet are reductions of his own marbles and others were apparently original models invented for reproduction in porcelain: a number, including the Leda, were, however, based in some way on works by Boucher. In this case, the starting point was the painting of the same subject executed by Boucher in 1742, or more precisely the engraved version by Ryland, in which the composition is reversed. In his adaptation of the engraving Falconet has not only necessarily invented a back for the composition but also changed the pose of Leda.

The relationship of the Thyssen terracotta to the Sèvres group is problematic. The upper part of the composition agrees almost exactly with both the biscuit example in the Victoria and Albert Museum and the plaster model at Sèvres, except for a somewhat different arrangement of the leaf sprigs around the tree trunk on the reverse. In the terracotta, however, the composition has been extended downwards; the additional lower section is made up of rocks with additional small plants and a spring of water issuing at the front, while the plant on the left of the biscuit has been replaced by a large clump of bulrushes. At the back a small plant (now partly lost) has been added below the rocks in the centre.

The possibility that the terracotta might be a model for the Sèvres groups must be discounted. As well as having considerably smaller overall dimensions than the porcelain example (when allowance is made for the additional parts ), the Thyssen Leda is far more highly finished than the terracottas by Falconet that survive at Sèvres, the treatment of the base in particular giving in the character of a finished work. On the other hand, Feulner’ s dismissal of the piece as a later (presumably nineteenth-century) copy is contradicted by the evidence of the thermoluminescence  test, its manufacture by modelling rather than by casting, the fact that it is not a straight reproduction of the porcelain version and the quality of the modelling, in so far as this is discernible beneath the later surface wash. These features suggest that the Thyssen terracotta was probably adapted from the Sèvres composition, but produced in the eighteenth century. Related to the Thyssen and Sèvres groups is a terre de Lorraine group in the Metropolitan Museum of Art. New York, signed somewhat indistinctly by Leriche, who may be the modeller of the same name employed at Sèvres, This has an additional Cupid ( also shown in engravings of some of Boucher’s drawings of the same subject) and represents the figures in the poses they assume in the painting, rather than reversed as in the engraving. However, the position of the swan and the way in which the legs of the lower figure are arranged on the reverse of the rock indicate a knowledge of the three-dimensional modification of the composition at Sèvres. Both groups would seem to belong to that class of eighteenth-century sculpture formed by copies, variants or multiples after works by celebrated sculptors, for which there appears to have been a considerable market.