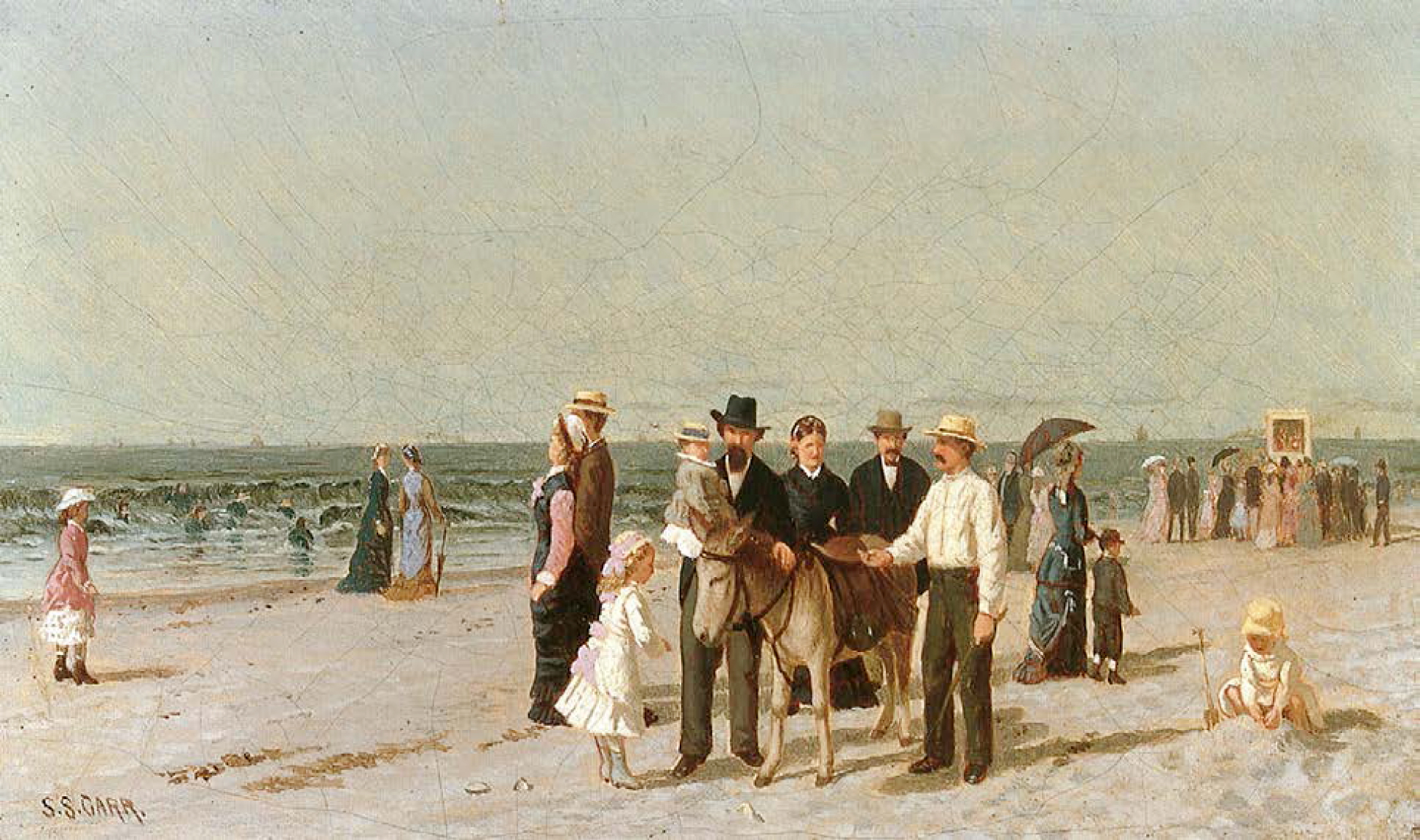 In 1879 and 1880 Carr painted a series of small Coney Island beach scenes whose brilliant light and still silent figures make them among his most compelling works. Pictures and magazine illustrations of the seaside were popular during the decades following the Civil War, when American beaches like Brooklyn’ s Coney Island fírst became established as family resorts. Holidays at the sea had earlier been a popular subject among British genre painters, in works such as Weston Sands by William Hopkins and E. Havell (1864, The City of Bristol Museum and Art Gallery). Like those artists Carr catalogued the activity of the seashore, depicting children at play, strolling photographers, and the acrobats and puppeteers who wandered the beach in search of an audience. But a distinctive stillness pervades Carr’ s small canvases, straining them of narrative movement, The same people, occasionally in the same poses, reappear throughout the series. Their faces are distinctive but often vaguely obscured, and they stand in groups unrelated to one another, punctuated by blank space. Carr has rooted the figures in place, disposing them like weighted mannequins along the broad expanse of sand and bathing them in the hot reflected light of the ocean.

It is uncertain whether Carr exhibited Beach Scene with Punch and Judy Show, which is closely related to a slightly larger picture now known as Coney Island, Hurdy Gurdy (188o; private collection). That work was shown as On the Beach, Coney Island in the spring 1880 exhibition of the Brooklyn Art Association (no. 188) and was reproduced as an engraving in the exhibition catalogue. Beach Scene has some sketch-like passages which suggest that it may have served as a preparatory study for the larger painting.

The two pictures represent West Brighton Beach, the most popular section of Coney Island during the 188os. Guidebooks recommended West Brighton as the most amusing resort for families because – unlike other stretches of the island – sideshows, hired donkeys and pedlars were permitted to wander along the sand. West Brighton also featured a camera obscura con­tained in a small pavilion near the central plaza, with which visitors could scan the beach and see ‘a series of moving pictures’. It has been suggested that Carr’s Coney Island series was based on photographs, although he is not known to have been a photographer. The studied formal order of his images may have been influenced by the camera obscura.

Children on the Beach