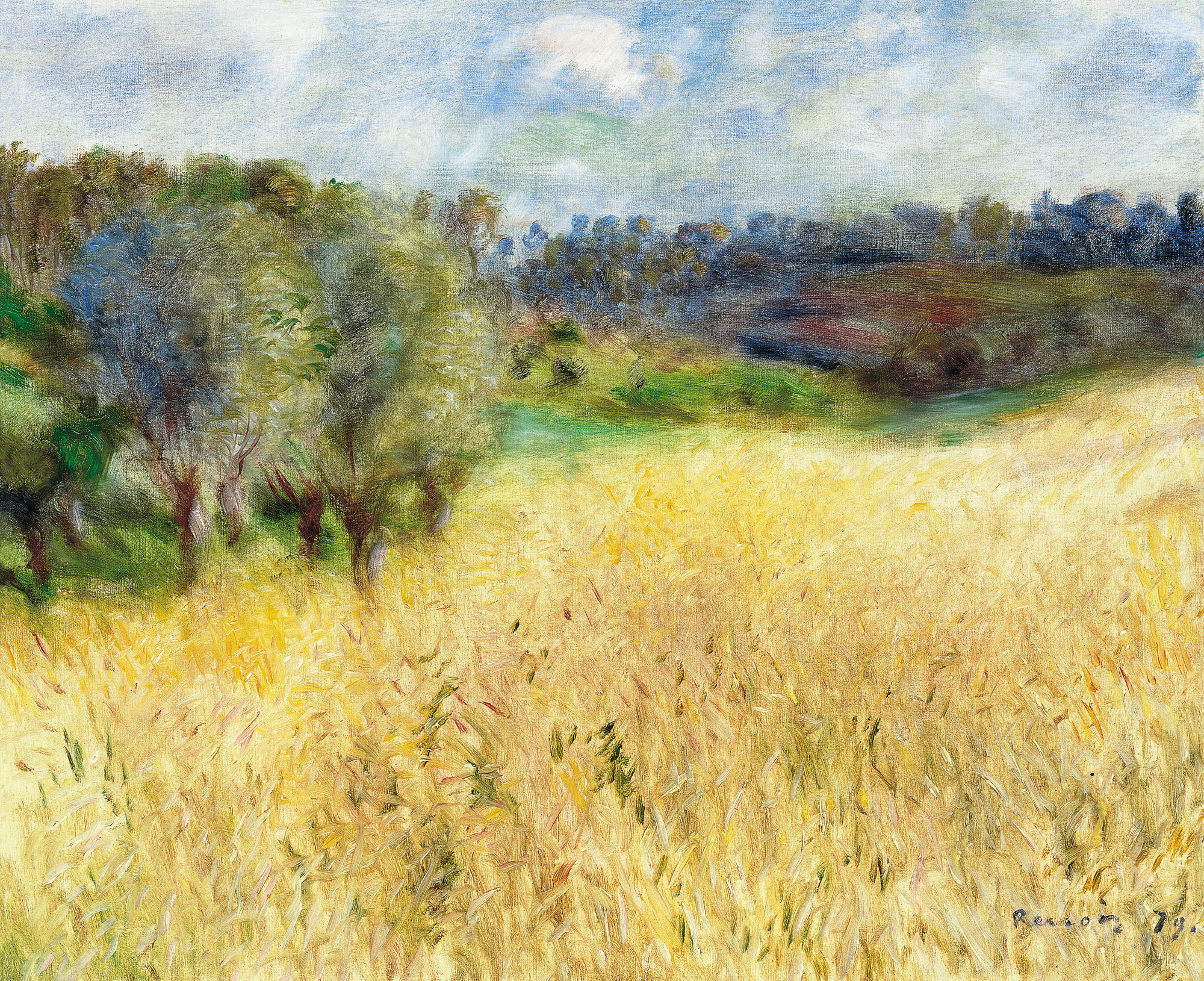 Like his friend Monet, Renoir considered nature as his main studio and open air painting as the touchstone of Impressionism. Throughout his life, he painted splendid landscapes, as he found in this genre a very special enjoyment and freedom of inspiration. The majority of these views were not meant to be exhibited and were not commissioned. The artist’s sole ambition was to seize the dazzling beauty of the light, the moving mass of vegetation tinted with all the shades of his palette, the velvety horizons and pearly skies. He wished to convey in his paintings the most immaterial atmospheric feelings, to depict the beauty of the air, and nothing else.

The Impressionist technique consisting in covering the canvas with quick touches of colour suited him particularly well for painting landscapes in the open air and rendering the fleeting impressions of atmospheric phenomena. Renoir used very diluted colours, which he called “juices”, in order to represent the scenery in its large masses, sombre and bright, and willingly ignoring all descriptive details. That thin and fluid coat which left partly visible the white primer constituted the base on which the artist worked by applying brighter touches of colour. “Gradually, patches of pink or blue, then sienna, were mixed in a perfect balance”, wrote Jean Renoir in Souvenirs, his memories of his father. “[…] Finally from the mist appeared […] the landscape, a little like it would have done in a photographic plate immersed in developer”. The wheat field which takes up half of the painting is depicted like a blurred mass, punctuated here and there by pinkish white traits for the ears of wheat and touches of red and green. A group of trees counterbalances the left side of the composition, while the shaded fields in the background give a sense of depth to the perspective. By optical illusion, the trees on top of the hill reach the foliage of those bordering the wheat field, drawing an almost continuous horizontal line against the sky. The latter, painted with pale and delicate shades, suggests slightly unstable weather.

This wheat field was probably painted in the surroundings of Wargemont, near Dieppe, in Normandy, where Renoir spent the summer of 1879 in the estate of the Bérard family. There is another landscape of the same period, very similar in its style and range of colours, entitled Landscape in Wargemont, with the same sweeping brushstrokes which punctuate the composition with bright colours. There is an impression of calm about these landscapes painted at a time when Renoir had an increasing success and was commissioned many portraits. Nature appears in them in its simplest and most bucolic aspect: a ripe wheat field softly swept by a sea breeze. No picturesque detail, no anecdote troubles the majesty of the scenery.