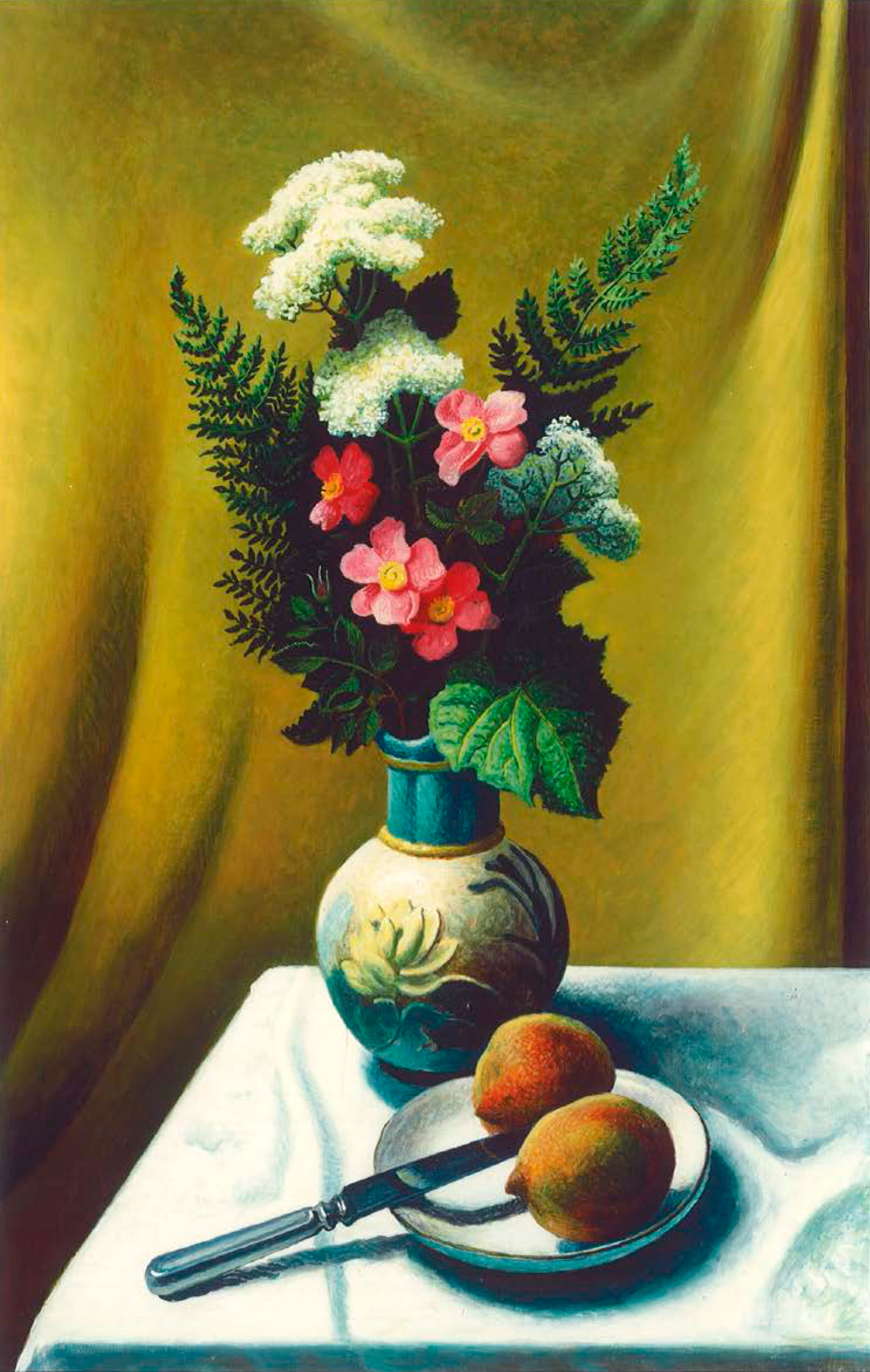 Oil on tempera on masonite

Commentary of the artwork:

At the beginning of the 20th century, US artists such as Grant Wood, John Steuart Curry and Thomas Hart Benton portrayed the most genuine America in a traditionalist style. These three artists had studied in Paris, but in their artistic creations they depicted the culture of the United States.

Trained in Chicago and in Paris during his youth, Benton painted and exhibited pictures until he was about thirty years of age, when he started to paint large murals for American institutions and extravagant portraits of everyday life during his trips and wanderings around the United States. Far removed from the period of his Regionalist works, this oil painting from the Carmen Thyssen Collection represents a return to his origins as a painter.

Still Life with Vase stands apart insofar as it is an atypical composition in Benton’s vast artistic career. He painted this still life when he was 78 years old. He had painted other similar earlier works dated in the 1940s and 1950s, such as Vase of Flowers (1940), Still Life with Flowers (1946) or Still Life (1951). The type of arrangement in these works coincide with that used in the still life we have in the Carmen Thyssen Collection: they are medium-­sized works of vertical format that depict a rounded-base vase with stylized flowers on a table covered with a cloth or tablecloth, and another in the background in ochre-greenish tones which are the only decoration. The afore mentioned still life of 1951 also coincides with this one in that in both show a plate with pieces of fruit and a dessert knife in the same position in front of the vase of flowers and situated slightly to the right. Still Lite with Vase from the Carmen Thyssen Collection is the latest of the works that we have mentioned, and it is surrounded by a greater intensity of light, much more akin to the vibrant spirit of the artist’s murals and travel paintings.

From the position of the table in these still lifes, it seems probable that the painter had this same scene mounted permanently in some part of the studio in his residence for at least thirty years, and perhaps he may have gone there whenever he did not have a commission to paint a mural or whenever he

was not travelling. Based on this assumption, we could surmise that Still Life with Vase, as well as the other still lifes, represent the most private art of Benton’s creations. After a life of travel, the painter found a place of refuge in his house in Kansas City where he could cultivate his vocation far painting ordinary elements of everyday life with total freedom and calm, in this case, within his most private environment.