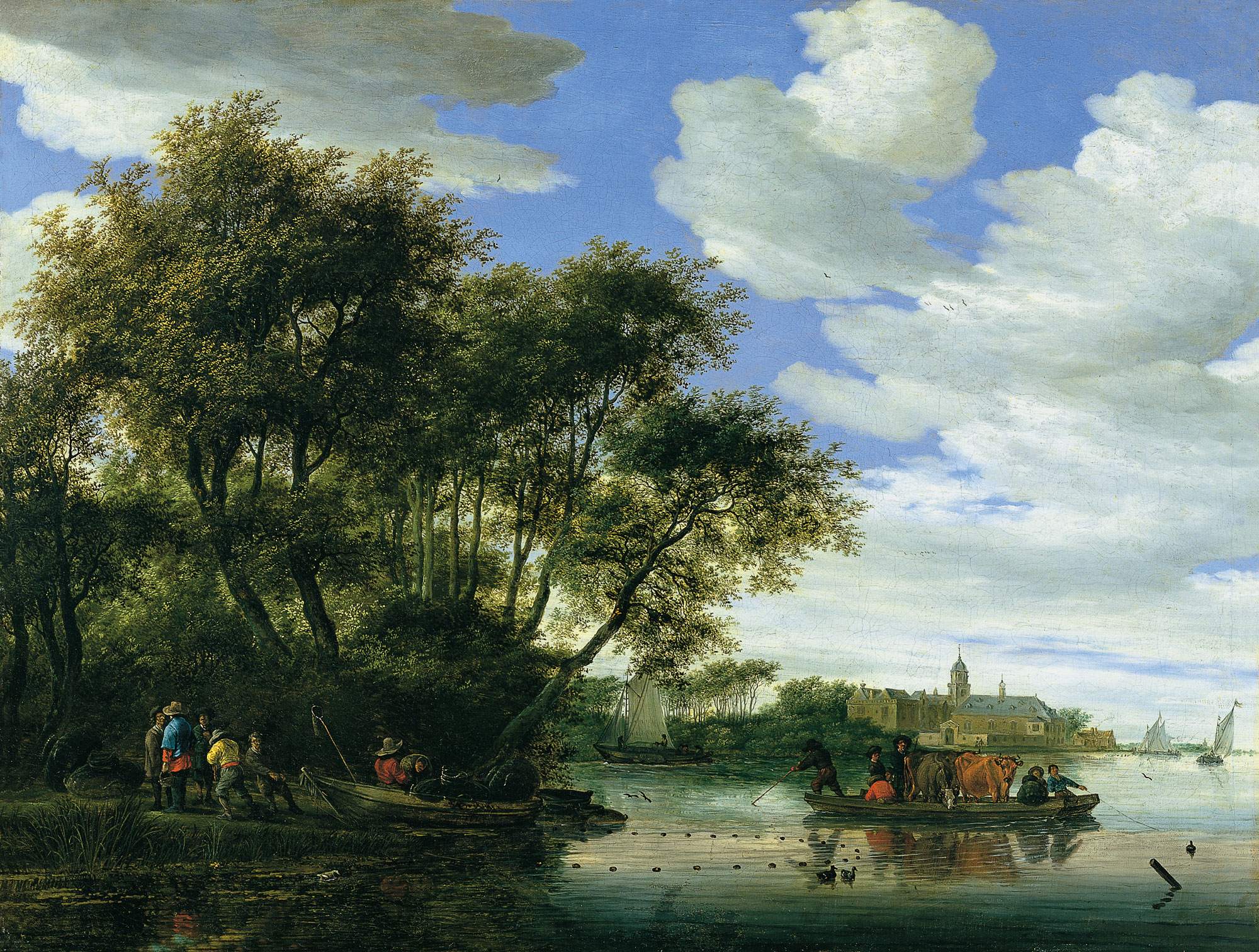 A View of the River Vecht with a Ferry, Fishermen, and Nijenrode Castle in the Distance, 1663

The Vecht River retreats from left to right filling the foreground with water. Tall trees rise on the left bank. Several colourfully dressed figures haul their fishing boat to shore on the left. Fishing nets float on the surface of the water with ducks in the foreground. Six figures and two cows crowd into a silhouetted ferry boat that poles its way across the river. Farther back a sailing vessel with its sheets raised drifts quietly in an inlet. In the distance is the outline of Nijenrode Castle, its several spires rising into the sky, as well as sailing vessels. A cloud-filled blue sky completes the scene.

The diagonally receding river landscape with tall trees stretching out over the waters, an overbooked ferry boat enhancing spatial relief, and a castle or often a church in the distance was one of Salomon van Ruysdael’s favourite designs. The subject descends from the art of Jan Brueghel the Elder and Esaias van de Velde, but Salomon developed it more fully than any other master of landscape. Particularly after c. 1645 he repeatedly varied the basic design witnessed in the present work. However so creative is his exploration of all the variations and permutations of these preferred designs that they never appear formulaic. Rather in each case they strike us individually as naturalistic and eminently plausible. While Salomon usually took creative liberties with designs and rarely depicted topographically exact landscapes, he did depict identifiable sites. Unlike Jan van Goyen and others, he left us no drawings to record sketching trips, but his paintings attest to fairly wide travels. He depicted Alkmaar, Amersfoort, Amsterdam, Deventer, Dordrecht, Egmond, The Hague, Haarlem, Naarden, Rhenen, Scheveningen, Spaarndam, Utrecht, Valkenburgh, Weesp, Zandvoort, and even on one occasion Brussels. He also shows a special enthusiasm for castles, depicting among others Liesvelt, Egmond and Nijenrode Castle. The distinctive shape of the last mentioned seems to have particularly appealed to him. It appears for example in the very similar River Landscape with Ferry Boat Transporting Cattle, dated 1649 (The Hague, Dienst Verspreide Rijkskollecties), as well as in the painting dated 1650 of the same theme in Aschaffenburg, Staatsgalerie. However Salomon also executed variations of the present work’s design in which he substituted other sites in the distance; see, for example the River Landscape with Ferry Boat and Alkmaar in the Distance, dated 1657.

The date on the present work was misread as 1643 when it was with the Galerie Charles Sedelmeyer in Paris in 1901 and when in the Maurice Kann Collection in 1911, but was correctly read as 1663 by Stechow and when catalogued for sale by Christie’s in London 1999. Like the other painting by Salomon van Ruysdael on a late date it exhibits the more painterly touch and colourful palette (note again the figures’ colourful costumes and the brilliant sky) that characterises the artist’s late manner. Stechow specifically compared the present work to an undated river landscape with a view of Nijenrode Castle that was with the London dealer, Edward Speelman in the 1960s, which the author would date to the same period as the presents work.

A Winter Landscape with Skaters and Sleighs before a Town