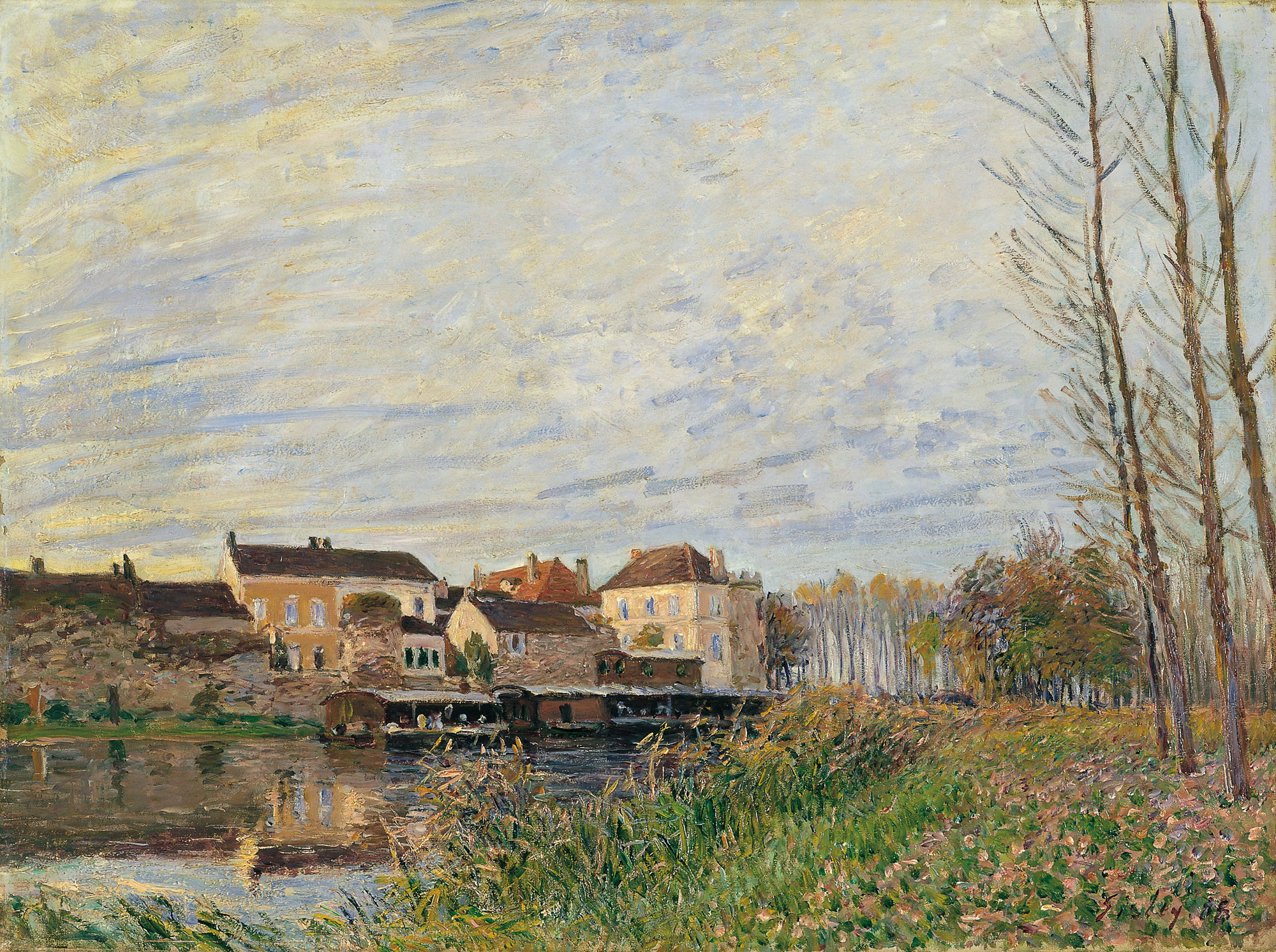 In 1881, Alfred Sisley moved from Sevres, just to the west of Paris, to the region of Moret-sur-Loing. After staying in By and Veneux-Nadon, he took up permanent residence in the town of Moret-sur-Loing in February 1889, living first in the rue de l’Eglise and then, probably from 1892, at 19, rue Montmartre.

Moret-sur-Loing lay to the south east of the Forêt de Fontainebleau, where, during the 1860s, Sisley and his fellow Impressionists had worked en plein air in front of nature. Its walls were washed by the River Loing, which flowed northwards to debauch in the River Seine some 5 kilometres away at Saint-Mammès. It had retained its medieval character in the form of its city walls and gates, its bridge across the Loing set with water mills, and its Gothic parish church, which Sisley was to paint “en série” in 1892-1893.

Sisley had been attracted to the area of Moret-sur-Loing in part because it represented a return to his artistic roots in the Forest de Fontainebleau. It also presented a range of motifs, especially the combination of expansive skies and flowing waters. As early as 31 August 1881, Sisley remarked in a letter to Claude Monet, that the “countryside is not bad-a bit pretty pretty” but that Moret had a “very pretty church” and was surrounded by “quite picturesque scenery.” Eleven years later, in his “autobiographical” letter to Adolphe Tavernier, critic and ardent supporter of the artist, Sisley recognised the profound significance of Moret for his mature artistic language: “Soon it will be 12 years that I’ve been in Moret and its surroundings. It is in Moret, faced by such dense vegetation, its large poplars, the water of the Loing, so beautiful, so transparent, so changeable, it is undoubtedly in Moret that I have made the greatest progress in my art; particularly in the last three years.” Alfred Sisley’s evaluation of Moret as a powerful source for his creativity was echoed in Gustave Geffroy’s 1923 essay on the artist: “Thus, Sisley has found his region. It is the edge of the forest of Fontainebleau, the towns spreading at regular intervals along the banks of the Seine and the Loing, Moret, Saint-Mammès. he constantly returns to the damp and leafy place where his talent feels at ease, where the people and the objects are familiar to him. He has chosen a region and stands by it, smitten by the quiet river and the tranquil outline of the town. Thus, he writes his chapter of the history of our land, of our waters, of our sky.”

Evening in Moret, End of October was made from the east bank of the River Loing, looking northwards towards the “bateau lavoir”. Behind the artist lay the bridge with its watermills, including the Moulin Provencher (see D 503). On the right of the composition, the avenue of poplar trees which strode northwards from the bridge is intimated. Given the absence of leaves on most of the trees, it is safe to assume that this work postdates the three other paintings taken from almost the identical viewpoint: Les Bords du Loing à  Moret, le matin (1888; D 687; Private Collection); Matinée de septembre à  Moret (D 688; Private Collection), and Le Lavoir à  Moret, été de la Saint-Martin, Dimanche après-midi (D 686; 1888; Private Collection, USA).

Although painted in the year preceding Sisley’s final move to Moret-sur-Loing, Evening in Moret, End of October belongs to a group of works created in 1888 which suggest that Sisley was systematically exploring the picturesque town prior to finally settling there in 1889. This process of exploration was centred primarily upon views of the town from the banks of the River Loing, although in D 656-660, he also recorded the point of entry into the town from By and Veneux-Nadon. While there were four paintings made of the view represented in Evening in Moret, End of October, a slight shift to the right in the artist’s angle of vision revealed the avenue of poplar trees, the subject of another “subgroup” of works (D 674, 689 and 690) created in the same year. By turning 180 degrees, Sisley was in a position to produce a further subgroup consisting of some six paintings looking upstream towards the bridge, two (D 679 and 680) included the eastern landfall of the bridge while the other four presented the Moulin Provencher and the walled western river bank screened by a row of poplar trees (D 681-684). This concern to present a visual map of Moret-sur-Loing, while echoing similar approaches adopted in places that Sisley had previously inhabited or visited, such as Louveciennes, Marly-le-Roi and Hampton Court, shows an altogether more deliberate and carefully considered sequence of visual notations which, by the early 1890s, was to have created what was effectively a panoramic record of the town as the artist moved his angle of vision through 360 degrees.

The emphasis upon the vastness of the sky and the expanse of the water in the left hand lower quarter of the composition summarise two dominant pictorial concerns in Sisley’s work which were noted both by himself and by his critics. For Sisley, the sky not only fixed the quality of light within a landscape, but also both determined the overall structure of the landscape and its recession into depth, and established its emotional or poetic dimensions: “[the objects] need first and foremost to be enveloped in light, as they are in nature. And the sky has to be the means (the sky cannot just be a background). On the contrary, it not only gives depth with its planes (since the sky has planes, just like the ground), it also gives movement with its shape, with its arrangement with regard to the effect or the composition of the painting. Is there a more magnificent and changeable sky than the one often seen in the summer? I mean the blue sky swept by beautiful white clouds. What movement, what speed, don’t you think ? It has the effect of a wave when one is at sea: it elates and carries one away. Another sky, this time later, in the evening. Its clouds grow longer, and often take the shape of a wake, of a backwash which seems fixed in the middle of the atmosphere, and gradually disappears, absorbed by the setting sun. This sky is tender, more melancholic; it has the charm of passing things-and I am particularly fond of it. As an indication: I always begin a painting with the sky.” Similarly, the sense with which the water of the River Loing shimmers, allowing the reflection of the houses and sky to dance across the moving surface and enlarge the spatial dimensions of the composition, was the subject of regular comment by critics. Julien Leclerq, for example, in an article prompted by Sisley’s death on 29 January 1899, drew especial attention to “some landscapes, among others, with that blue, azure, clear water running between orange verges.”

Evening in Moret, End of October appears to summarise Sisley’s sense of place, an understanding that emerged from his persistent visual mapping of the town and its environs. It is a work which could well have informed Arsène Alexandre’s summary of those qualities of Sisley’s art that made him a distinct voice within Impressionism: “Certain mornings have an exquisite freshness, some views of Moret-sur-Loing have a radiant warm golden hue, Sisley likes the beautiful clear skies, the wind rustling in the trees in spring and summer, the delicate pink sheen of the quiet mornings.”

A Turn of the River Loing, Summer