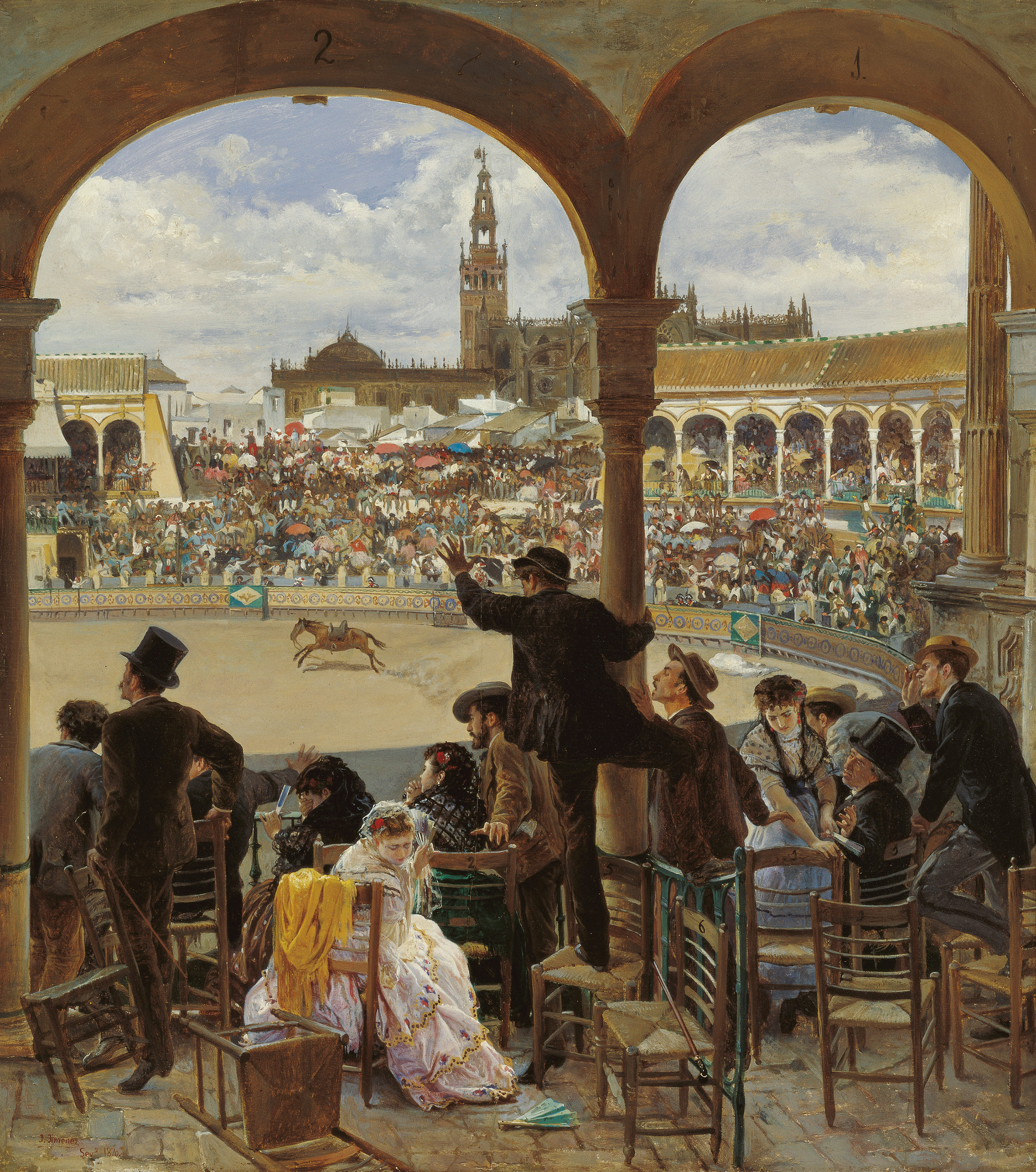 A group of spectators looking out from their box in the Maestranza, Seville’s popular bullring, watch what appears – from the evident gesticulations – to be a dramatic moment in the bullfight taking place on the left. Although the action falls outside the spectator’s field of vision, the bull must have charged at and toppled the picador, as evidenced by the galloping horse that has broken loose (and the one that lies gored on the right-hand side). This atmosphere is heightened by the lively presence of the crowd in the background, whose cries we imagine and whose almost enamel-like appearance is due to the juxtaposition of the limited palette of colours. The figures in the box are notable for their variety of expressions and gestures of all kinds, ranging from the one standing on the rush chair and hugging the column, who emphasises the verticality of this element of the composition, to the one on the far left peering through a small pair of binoculars and about to stand on his own chair. Most of the men crane their necks – and one has leapt to his feet with such impetus that he has even knocked his chair over – while all but one of the women hide their faces from too crude a sight either by turning away, like the one that is a delightful patch of whites and pale pinks set off by the brownish yellow, almost biscuit tone of the shawl, or by getting up to leave, such as the one in the right-hand group whose husband tries to persuade her not to go. The irony and subtle humour conveyed by the titles given to the themes of genre scenes of this type (whether or not the so-called “dress coat paintings”) are found here in the attitudes of the people who attempt to see what we cannot see, making us onlookers much to our regret: the “critical moment” referred to in the title ends up being shared by the spectator and the figures, by the former precisely because he attempts to capture the latter.

The view of Seville cathedral, which is plausible because the ring of boxes was not completed by the architect Juan Talavera until 1880, allows the artist to repeat the view chosen by Joaquín Domínguez Bécquer in his painting La plaza de la Maestranza antes de empezar la corrida (“The Maestranza Bullring before the Bullfight”, Museo de San Telmo, San Sebastián), with the same effect of the mass of spectators and the architectural setting of the bullring with the cathedral in the background. The picturesque nature of this view of the cathedral from the bullring had been pointed out by Théophile Gautier, who writes in his Voyage en Espagne, referring to the bullring in Seville of 1840: “It is said that a violent storm threw down all one side which has not since been rebuilt. This arrangement enables you to obtain a marvellous view of the cathedral, and forms one of the finest sights imaginable; especially when the benches are filled with a brilliant crowd, resplendent with the brightest colours.”

A Pass in the Bullring was entered with two other works (Washerwomen Disputing and The Holy Oil) in the National Exhibition of Fine Arts of 1871, where it earned a medal (third-class) of which Manuel Cañete acknowledges receipt in his analysis of the competition in La Ilustración Española y Americana and points out the accomplishments of inspiration in the three small genre scenes entered by Jiménez Aranda.

In a monograph on his grandfather, Jiménez Aranda’s grandson Pantorba wrote that A Pass in the Bullring turned out to be non-eligible for the medal it was awarded, and that it was sold in Seville for 4,000 reales, an “epoch-making price in the city as it was considered rather high”. After providing information ten years later about a replica in which the figures wear dress coats, he adds that the present painting is the picture referred to by Mélida, who had seen it in the Madrid studio of his painter brother Enrique “around the year 1870” and that Enrique and Jiménez Aranda had spoken “of the possibilities of sending it to the Paris market”. And he ends by pointing out that the work was reproduced in the Barcelonese magazine Lecturas with a brief article entitled: “Jiménez Aranda, the painter who owes everything to himself.”

The replica in which the figures wear dress coats was reproduced with the title “En la plaza de toros de Sevilla a principios de siglo: Emociones de una cogida (cuadro de Jiménez Aranda)” [“In the Seville Bullring at the Beginning of the Century: Emotions of a Goring” (painting by Jiménez Aranda)] in the 15 August 1880 issue of Ilustración Española y Americana in connection with the exhibition at the Salon of 1880. The accompanying text, written by Manuel Bosch, states that in 1880, in order that it would serve as a companion piece – which is rather doubtful judging by the disproportion in size – the painter transferred the scene of his painting to another work, also by him and depicting the same theme, but belonging to the current period (i.e. the replica in question). He goes on to reflect briefly on the fact that in ten years not the slightest change had been made to the “bloody spectacle of bullfights”, except for the substitution of dress coats and three-cornered hats for the jaquette and egalitarian bowler. And not even the “setting” has changed, as the bullring of the Andalusian capital, built in 1760 by the Real Maestranza de Caballería, remains unfinished on one side, so that the elegant silhouette of the Giralda towers above the spacious amphitheatre. He ends by pointing out Jiménez Aranda’s uncommon talent for composition, and that the picture deservedly featured in the Paris Salon that year.

The variations introduced by the replica – apart from the main difference of the clothing – lie above all in the viewpoint, which is tilted slightly to the right so that the two facing boxes are logically more visible; this also enhances the effectiveness of the cathedral background, which in the 1880 version is framed by the arch on the right. There are also very slight variations in the angles and positions of the figures, especially the woman on the left who turns her head away so as not to see the incident, the position of the leg of the man standing on a chair in the centre and objects such as the stick, which in the replica of 1880 lies on the ground instead of in the foreshortened position on the chair in the centre of the first version studied here. More striking is the absence from the replica of the dead or mortally injured horse lying in the arena; it may be concealed from view by the heads in two-cornered hats on the right, though it was probably eliminated to avoid offending the sensibilities of Parisian viewers at the Salon of 1880 (in which it was entered along with Los bibliófilos (“The Bibliophiles”), and above all those of the dealer Goupil, who bought it, as a result of which it ended up in Buenos Aires, as Pantorba reports in his aforementioned monograph on the painter.