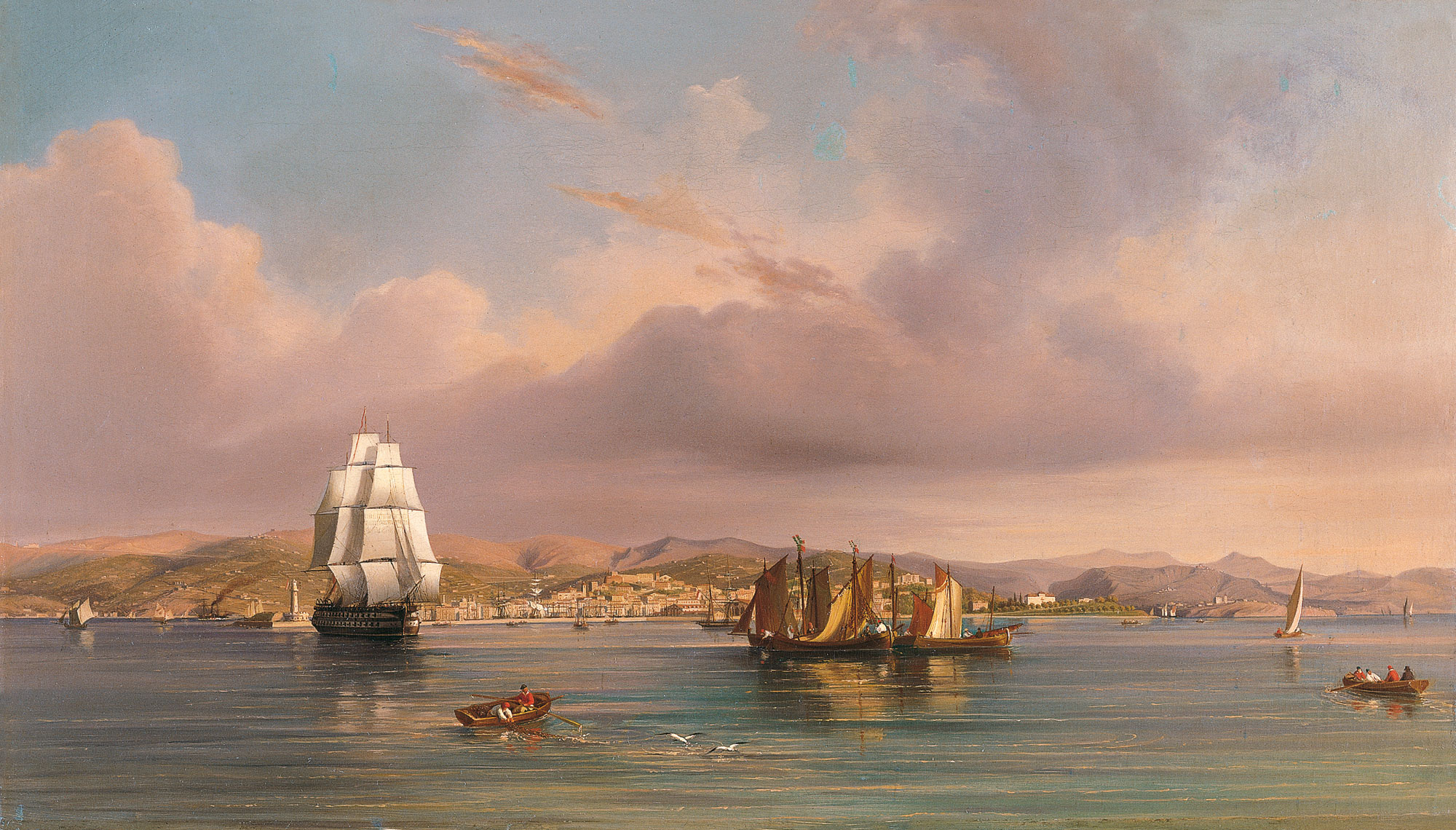 This beautiful canvas depicts a panoramic view of the city of Trieste, its harbour and surroundings. Although the city appears to be seen from the sea, in fact the perspective is resolved from a point located on the north-eastern coast and on land, hence the frontal view onto the coast is not total. It rather shows a gradual movement from left to right that enhances the depth of field, which is aIso reflected in the way the boats are foreshortened. The most notable element is the warship, with its huge white sails, located close to the left margin of the canvas. The hierarchical organisation of the pictorial elements also runs from left to right.

In the left half of the painting, Tischbein depicted the panorama in great detail despite its distance. It is easy to recognise famous buildings such as the San Giusto church in the upper part of the city, the Casciotti Palace, the harbour and the numerous boats anchored there. The city view is flanked by the larger vessels: on one side we see the warship setting out to sea and on the other the group of fishing boats at work towards the middle of the composition. The focus is thus on the city itself, with a particular focus on the old town.

With regard to the development of the pictorial depth, the distant view of the main motif is emphasised by the marked contrasts of scale which are to be found between the boats located in the successive picture planes, and is particularly striking with regard to the volume of the rowing boat in the near ground and the warship mentioned above. This, reduced to the size appropriate to the painting and located in the middle ground, provokes a strong sense of distance between the planes. This is even further emphasised in the rear planes, which use a striking diminution of scale. The volumetric penetration of space allows for the use of an emphatic perspective recalling Venetian vedute of the previous century. The image succeeds in conveying a huge sweep of the Gulf of Trieste. The painter’s deliberate aim was to brilliantly develop a wide-angled viewpoint and also to chose notably horizontal proportions in the rectangular format that he uses here. Although not a large painting, the monumental perspective is subtly emphasised in this landscape.

Tischbein’s pictorial language is notably similar to Canaletto’s. On one hand, the luminous visual perspective is resolved in that artist’s style, using detailed drawing and separated planes of light, as well as precision and colour in the distance. In addition, another element in Canaletto’s style is the importance granted to the sky and clouds. This is not only to differentiate the light leveIs, but also because in this particular canvas, the area occupied by the sky is double that of the land and sea strips together. The element of air, which plays such a huge role in the image, majestically enfolds the action taking place.

Another element reminiscent of Canaletto is the appearance of the water. Here the tonality is achieved through a blend of transparencies, iridescent colours and gradations of blue. The artist applied some fine white strokes to accent the waves, a formula is not exclusive to Canaletto but certainly characteristic. In the present work, the brushstrokes are of different thicknesses, and the glazes also appear to be of different consistencies, again recalling Canaletto’s realism.

Tischbein clearly looked to the most essential values of classic Venetian view painting. He pays particular attention to the sense of transparency of the atmosphere, the precise rendering of the view, taking great pains with the most distant planes, as well as the immediate foreground. The artist looks for a harmony between the representation of everyday life and the more solemn representation of the setting in his overall concept of the view.

The painting has all the qualities of a realistic representation of a specific place, but it also contains a discrete allegorical element. In addition to drawing the gentle profile of the coastline of the Gulf of Trieste, recording its villages and buildings, Tischbein also features an entire display of different types of boats on the calm waters of the bay, ranging from the most modest little rowing boat in the immediate foreground to the steamboat in the background, hugging the coast, and including boats of the type used by fishermen, the warship and the large boats leaving the harbour. The tranquil life of this free-port is illustrated with a sort of catalogue of boat types. Fishing and commerce, the sense of well-being protected by the warship, are eloquently transcribed in this painting.