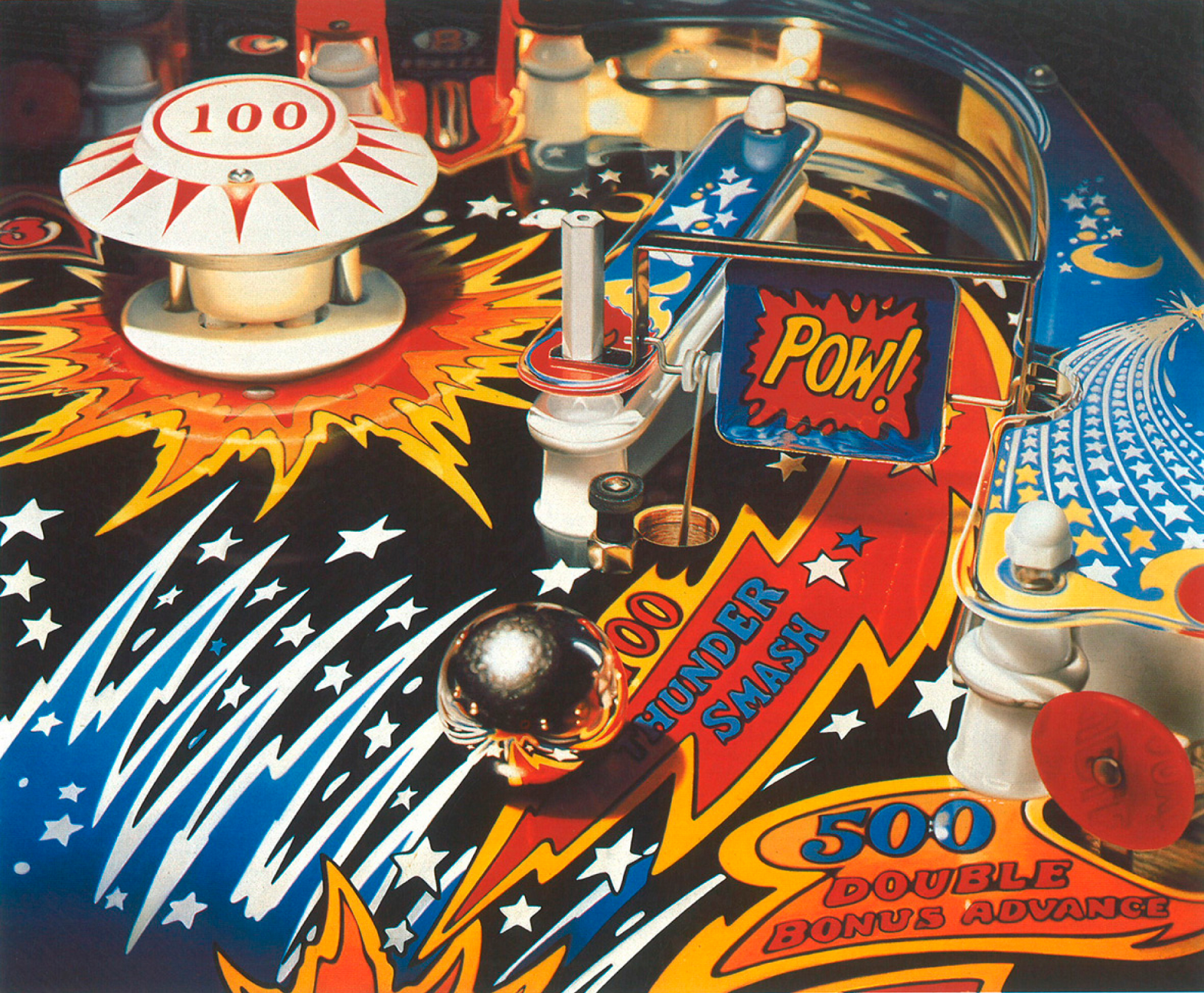 Charles Bell belonged to the first generation of American Photorealism movement (1960-1970). He specialized in the representation of objects such as vintage toys, dolls, machines and consumer goods (series of chewing gum vending machines) and recreational machinery (series of pinball machines). One of his most important series and the one with the most continuity in the pictorial production of the painter would be the one dedicated to the recreational machines of the pinball game. It´s in 1976 when he discovered potential imagery in these machines. In 1977 he began the first series of works of this subject of which the works stand out: The Wizard, Gin, Fireball 500 n.1, Feel Them Bumpers, Double Advance & Thunder Smash. (1)

In these pinball series Charles Bell will represent a perspective and a very specific fragment of the game table. From this chosen fragment he would paint several versions of the same title and different sizes. The picture Thunder Smash (1977) of the Carmen Thyssen Collection is an example of these versions. This work, of great size, belongs to the first series of the theme of pinball of which the painter would make several versions in different sizes and techniques.

In Thunder Smash he selects a very specific area of ​​the game table, considerably expanding the scale with respect to the actual size, highlighting the representation of the game’s mechanical elements (bumpers, spinners, rollovers, etc.), letters, numbers, colored bulbs, as well as the metallic ball of the game, located in the foreground, that reflects the surface. Also in the central part of the painting, in blue, the letters that give name to the work, “Thunder smash”, are highlighted.

Bell, like other photorealist painters, previously photographed the object that he was going to paint and after enlarging the chosen motives he projected them by means of a slide on the canvas and then he painted them. This projection technique allowed him to draw all the details with maximum precision on the canvas. On the other hand, the technique of oil painting and, especially, the quick-drying acrylic, allowed him to advance quickly in the work. Charles Bell in the conversations in his studio with art curator Henry Geldzahler explained in reference to this technique that “the objective (photographic) is the best way to see reality … my works are reality, but a subjective reality” (2). Indeed Bell’s works captured reality, but a fragment of reality, in this case the table of a gaming machine adapted and augmented by the artist, highlighting the vivid colors, the brilliance of the light and the reflections on said surface, characteristics that this type of recreational machinery precisely had and fascinated the artist. So much so that Bell, after the completion of other thematic series, in 1987, would again make another series of works dedicated to the game pinball, highlighting the works entitled: Advance Bonus, Double Bonus and the famous Paragon (1988), series that continued until 1990-1993.