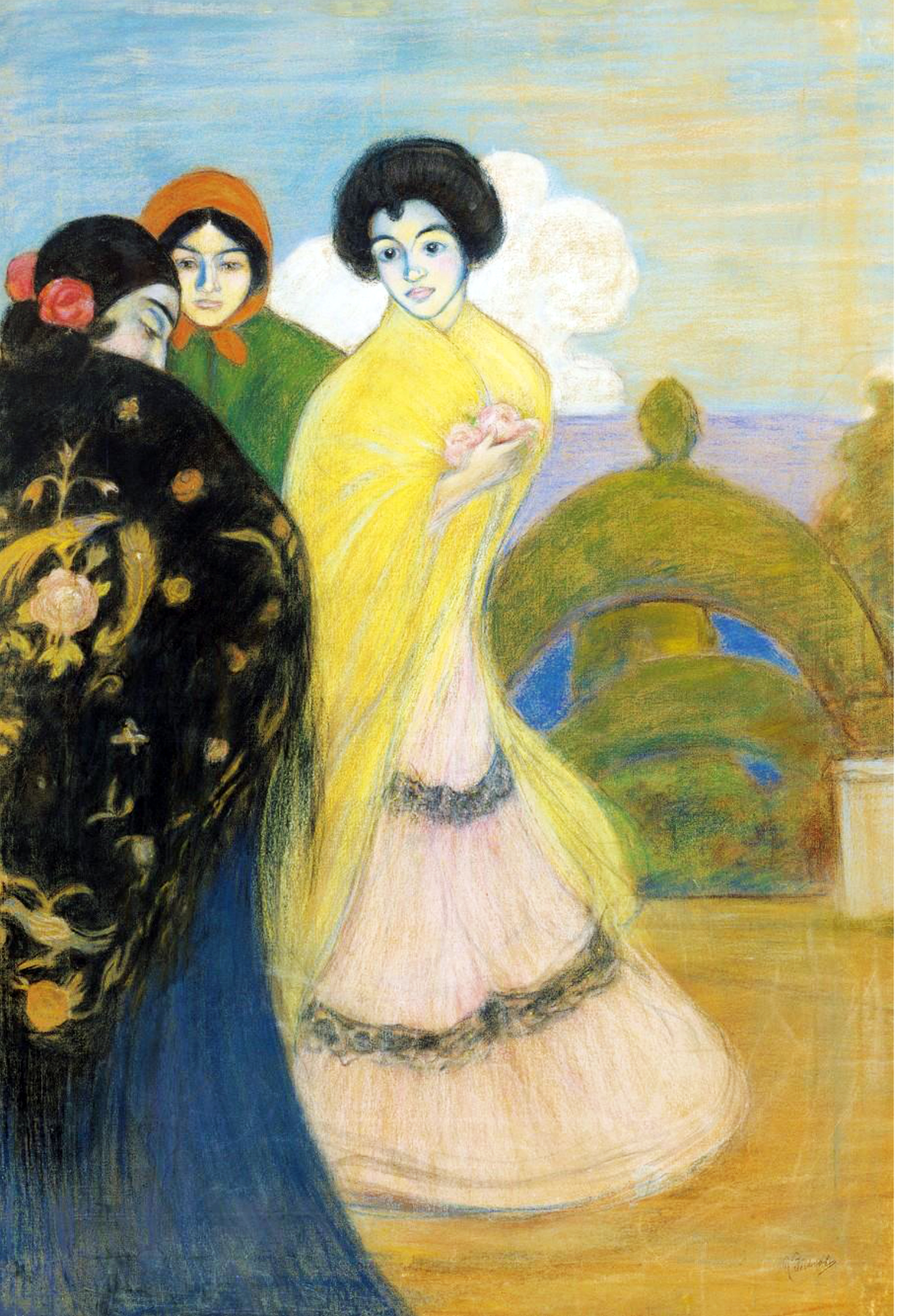 Gouache & pastel on canvas on paperboard

Towards the end of his period in the Colla del Safra, where he formed an informal group with Mir, Nonell, Canals and others, Ramón Pichot, who was the oldest of them ali, had started to enter the orbit of the older Catalan Modernists: he was also an informal disciple of Ramon Casas, and he accompanied Santiago Rusiñol on a trip to Granada in December 1897 that continued until May 1898. Even though there is no date on this pastel by Pichot, it most probably dates from that time.

In the picture, we see three women dressed in Andalusian style as they stroll through a garden in which we can clearly see one of the bowers or tops of  cypress trees cut in topiary fashion-the “green architecture” as Rusiñol called it – that had existed in the Generalife or the Realejo Bajo from at least the 16th century. These bowers, which Rusiñol also painted on several occasions – indeed Picasso portrayed Rusiñol in front of one of them in the drawing from the first number of Arte Joven (1901)- are unquestionably an emblematic element in the context of this modernist group. As such, they also appear in the poster announcing Rusiñol’s book FulIs de la vida, which was designedby Rusiñol himself and Miquel Utrillo (1898), and before that in the poster for another of Rusiñol’s important books, Oracions (1897), drawn in this case by Utrillo. lndeed, Pichot illustrated FulIs de la vida, the previously mentioned book on Rusiñol’s life and he had already started work on this before the two of them set off on their trip together to Granada.

Although we have no conclusive proof, it is possible that this piece was part of the solo exhibition that Pichot held in the large hall of Els Quatre Gats in Barcelona in February 1899, when he displayed fifteen paintings and about thirty drawings that he had done in Granada months earlier. On the other hand, if we consider the size of this work – one metre twenty centimetres high – and Pichot’s tendency to participate in the Paris Salons during those years, it is very possible that the author also wanted to exhibit these Three Friends there, and if this were the case, this work might well have been the piece that the painter presented in the drawings section at the Salon de la Société Nationale des Beaux Arts of 1899, under the title of Chulas.

So then, this is a Pichot painting whose origins lie in his discovery of Andalusian exotism – which was in great demand on the Paris art market at the time – but with a Japanized composition, influenced by the symbolist decadent movement and executed in a manner very similar to the synthetism of the time that had established itself in contemporary French artistic circles and within the circles of Sérusier, Maurice Denis, Ranson, although without coinciding exactly with the style of any of them. This Pichot is prior to the painter who would introduce the Catalan themes that were enthusiastically greeted by L’Art Décoratif in 1901, and prior to that of the lively colourist who would attend the cage aux fauves at the Salon d’Automne of 1905.