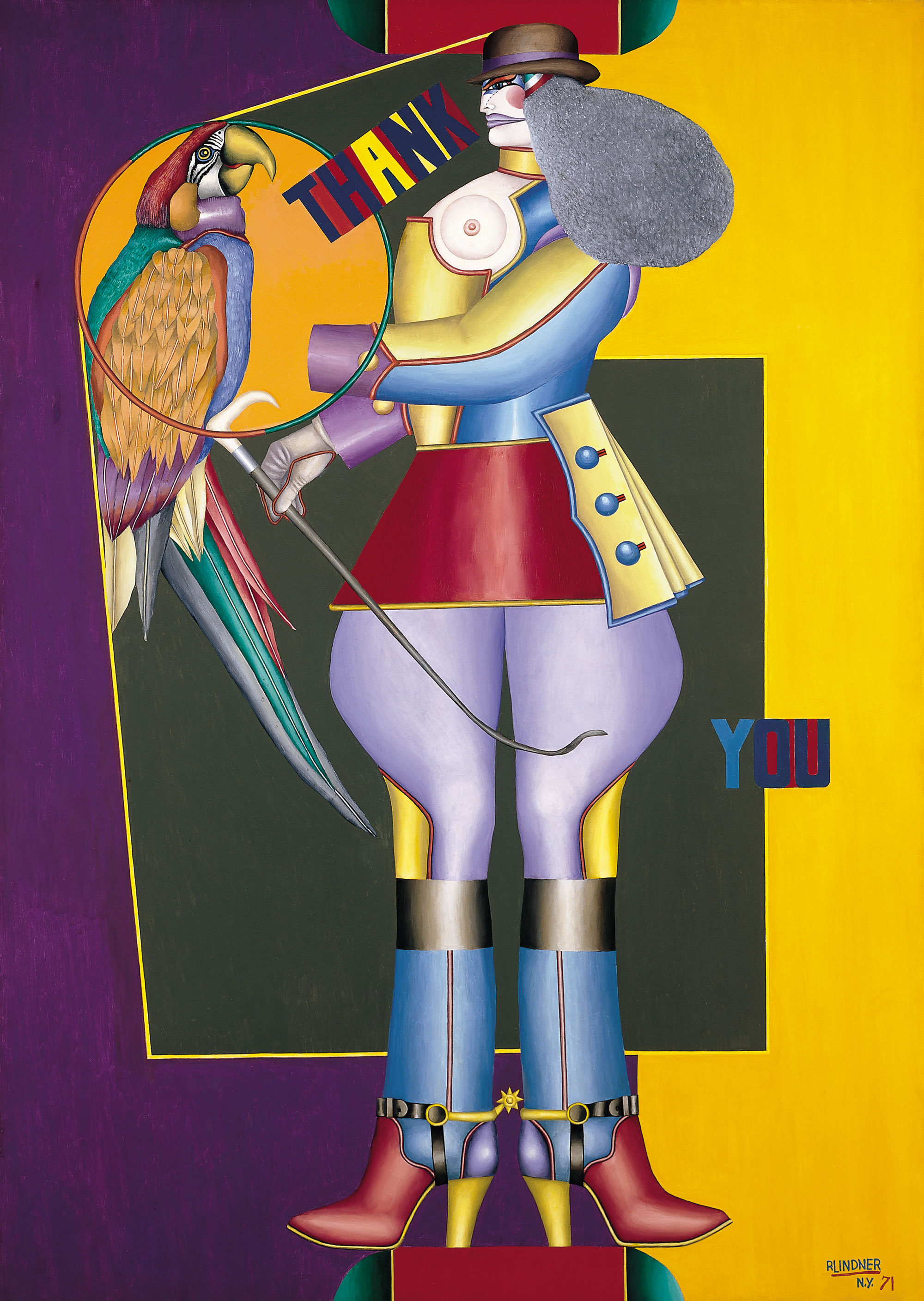 Thank You, a work painted by Lindner in New York in 1971, during his period of artistic maturity, represents a robot-like female figure of monumental proportions, taking up the entire composition, against a geometrical background with strong flat colours. Woman is the central icon of Lindner’s work. The artist makes use of the modern amazons represented in his works to satirise sexual habits or to criticise incisively the dehumanisation of modern life.

As is habitual in his work, the inclusion of a dissonant object in the composition heightens the enigmatic aspect of its characters. In this case the woman carries a tamer´s whip in her left hand and in her right a hoop on which rests an enormous parrot, perhaps a reference to meaningless chattering. The woman is represented partly full face and partly in profile, from an intentionally very low viewpoint, a compositional device which automatically makes the viewer smaller. Thus, the possible allusions to her role as a tamer of men become clearly evident.

Richard Lindler was an artist who painted slowly and produced few works. Each painting was the result of a long process of intellectual development and was preceded by many hours spent observing his surroundings and many drawings, through which the final piece was worked out. On the other hand, we should not forget his beginning as a graphic illustrator, as it is clear that those simple images, which nevertheless had a very strong communicative effectiveness, were for him a permanent source of inspiration. Indeed, as Judith Zilczer revealed to us, Thank Youtakes up the same design of a drawing which Lindner had produced for the magazineMademoiselle in 1942, shortly after his arrival in New York. In that illustration, there is a mysterious woman clothed in a strange cage-dress with a man in a top hat locked inside.

Both the man and the woman are holding a bird in their hands, in the same attitude as we find later in Thank You. In 1967, Lindner took up again for the first time this subject in a gouache representing a woman with a parrot, also entitled Thank You and, in 1971, he made around twenty preparatory drawings, all carefully executed, in which the final composition of the oil painting was gradually developed.

To the laborious process of development of his works, rightly qualified by Werner Spies as a «mental collage», we have to add a whole network of influences to which Lindner is indebted. In his works, inspired by the urban environment of New York or in American mass culture, it is possible to recognise the mark of Georges Grosz’s social satire, the formal simplification of Oskar Schlemmer’s automats and Fernand Léger’s monumental mechanised figures; his abstract backgrounds and the typographic sentences point to the aesthetics of the poster and the world of advertising; the psychological associations between the objects and characters link him to Surrealism; the formal decomposition is taken from Cubism; and, finally, his artistic language and his colourful and brilliant palette link him to Pop, of which he is considered a precursor.