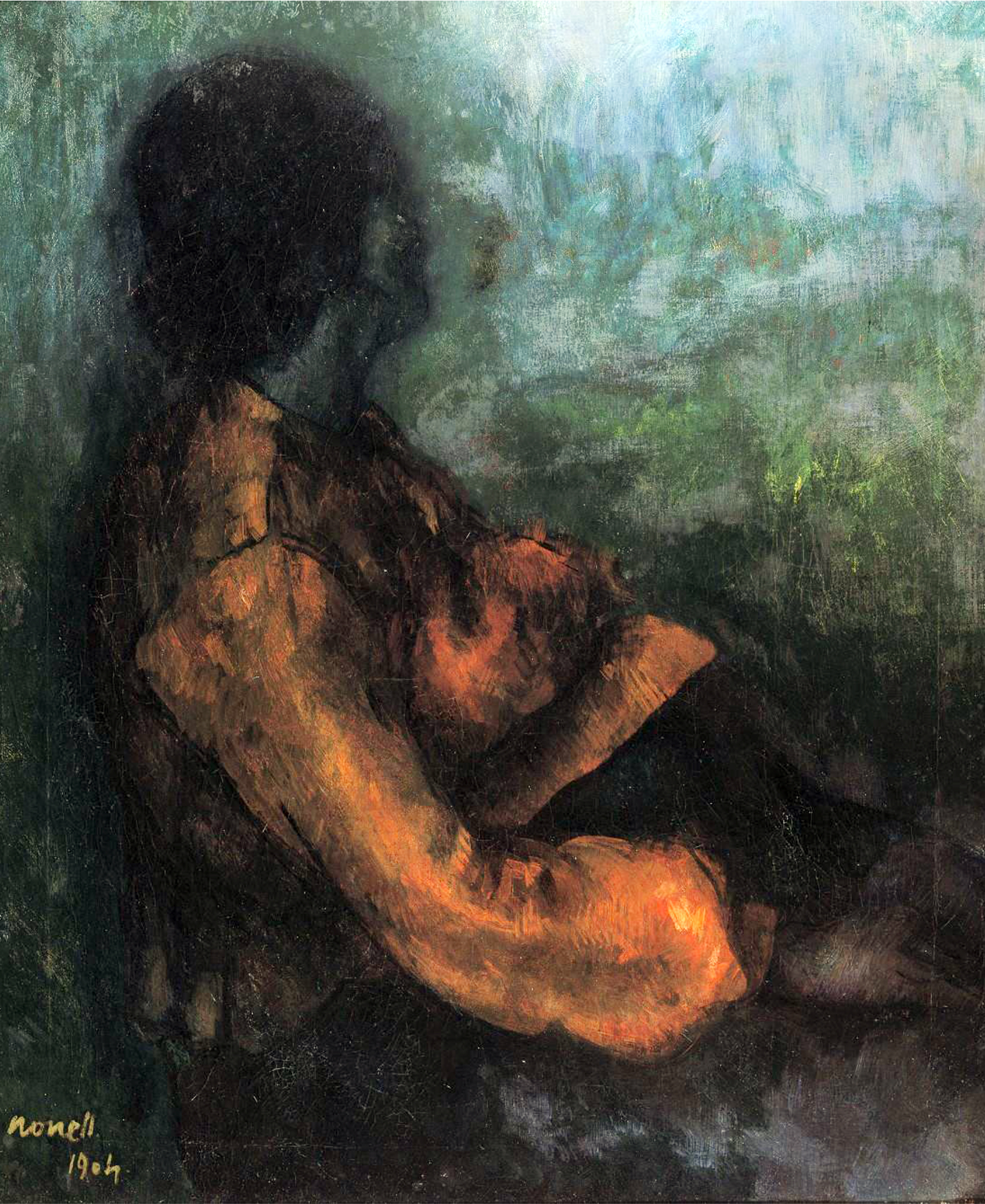 Nonell depicted the single female figure more times than any other subject. While no complete catalogue raisonné exists, Jardí’s book, which is the closest to such a catalogue, lists more than 200 oils of which around 140 depict this subject. Thus, more than 70% of  Nonell’s production in oil consists of representations of single wornen, while this does not take into account paintings with more than one female figure in them. Of Nonell’s paintings of women, more than half depict gypsies.

In fact the subject of a single woman, whom Nonell always painted as unsmiling, even downcast, does not appear in his oeuvre until 1901. Prior to that he had concentrated more on drawing while his paintings focused on landscapes and group compositions. In 1901, following his return from París where he had spent much time from February 1897 to at least October 1900, Nonell experienced a personal crisis: between 1900 and 1901 little is known of his activities and there are few recorded works. We do, however, know that he began to prepare an exhibition to be shown at the Sala Parés in Barcelona in January 1902, and it was at this point that the subject of isolated wornen first appeared.

The exhibition had great repercussions: although necessarily admired it was a great crowd-puller, La Vanguardia dedicated front-page space to it. Pèl & Ploma devoted almost an entire issue to it, while the young Picasso saw the exhibition just as he returned to Barcelona following an intense period of more than half a year in Paris. Without any doubt the exhibition influenced Picasso in his depiction of women in his Blue Period work.

This painting, a typical example of Nonell’s highly individual post-Impressionism, is painted two years after the Barcelona exhibition but is still very much in line with those earlier interpretations. The position of the head, turned so that the viewer can hardly see the sitter’s features, is clearly related to the Head of a Gypsy also of 1904 and once part of the collection of the critic and writer Alexandre Plana (now in the Museu de l’Empordá in Figueres). The fact that this painting depicts a pregnant worman makes it a particularly interesting example of the genre.

The annoying, uncompromising artist who painted this Gypsy had recently been accurately desctibed by the writer Frederic Pujulá: “View artists have had to support so many attacks as Nonell, even if they have been made in private rather than publicly, for Nonell has been a ground-breaker in this country, and ignorance [ … ] hates innovators [ … ]. Everything has been said about him: that he doesn’t know how to draw [ … ]; that he doesn’t have any sense of colour, that he’s excessive, monotonous … and to crown it all, he is criticised for painting so many gypsies and poor
people, as if this artist didn ‘t have the right to feel what he wanted [ … ]

The present painting dates from a period when Nonell had lost his enthusiasm for Barcelona and, while still submitting works to the Paris Salons, had also started to send them in large numbers to the National Exhibitions in Madrid, where, however, he never achieved more than an honorary mention in the exhibitions of 1904 and 1906.

The fact that the painting is not reproduced in any of the Catalan books on Nonell which I have come across, nor is it among the old photographic plates of Arxiu Mas or Francesc Serra, and that it comes from a Madrid collection, makes it possible that the painting was one of the eleven which the painter exhibited in the National Exhibition in 1904 (he had not exhibited in Madrid since 1895), or one of the seventeen which he showed in 1906 and whose titles are easy to confuse as they all depict similar subjects.