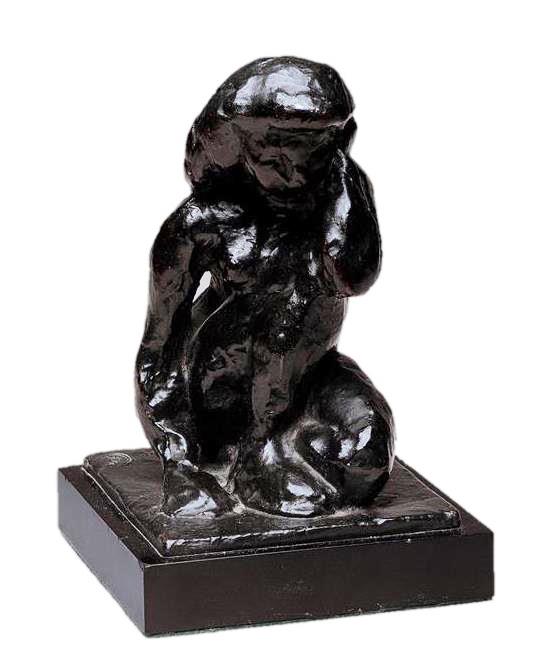 Matisse began to create sculptures towards 1898, a turning point which led him to abandon his pictorial style of the 1890s, turning his attention away from still lifes and landscapes to the human figure. Thereafter, he occasionally dedicated himself to sculpture, especially when his painting reached a critical point, and he produced about seventy pieces up until the beginning of the 1930s. Matisse’s favourite technique was clay modelling. For him, as for Degas, modelling was a parallel and alternative medium to painting, a “complementary study” to put in order feelings and ideas. He would apply to sculpture the figurative motifs he had previously used in painting, and which sometimes reappeared in his pictures as statuettes. Thus, the position of this squatting nude evokes the figure sitting in the foreground in the sketch Music (spring-summer 1907) or the squatting nudes in the two versions ofLuxury (summer 1907) and Bathers with a Tortoise (February 1908). It returned to painting again (in the form of a statuette) in Bunch of Lilacs (spring 1914).

The majority of Matisse’s sculptures, with very few exceptions (such as The Serf, Decorative Figure, the series of reliefs viewed from the back or the Large Sitting Nude), have a small format. In Sarah Stein’s famous notes, Matisse is said to have declared: “A sculpture must invite us to hold it like an object”. Matisse’s statuettes were meant to be touched with the imagination. At the same time, the small format sculpture represented for him a challenge to his ability to synthesise: “The smaller the sculpture is-he said-the more the essential part of the form has to assert itself”. This aspiration to the essence is clear in this squatting nude, inspired in the photograph of a model but simplified and subjected to expressive distortions (such as the anti-naturalistic increase in the proportions of the legs and feet). It seems inevitable to compare it with Mediterranean (1905) by Maillol. Both figures share an air of meditation, an absorbed or introvert attitude to the rest of the world. However, there are a number of crucial differences between Maillol and Matisse. Matisse himself said: “Maillol worked by means of mass, like the classic artists, while I work through arabesques, like the Renaissance artists.” In Maillol’s Mediterranean, the left elbow rests on the left knee, conferring on the whole figure a sense of classical clarity and stability, while the right arm and leg act as stanchions which support the structure. On the other hand, the “crossed” position of Matisse’s statuette, with the left elbow resting on the right knee, is much more complex and less stable. In opposition to Maillol’s tectonic rigidity, in Matisse’s statuette everything seems to flex, to bend, to intertwine… Maillol’s statue offered a smooth surface, while Matisse’s shows the marks of the pressure of the fingers on the clay, with a freedom linked to the tradition of the sculptural sketch.

Matisse’s sculptural research usually developed in the form of series. This Small Crouching Nude with Arms was the starting point of a sequence of sculptures created during that same year. On it was based a second piece in the same position, but with only one arm and without a modelled base. In other later versions, Matisse emphasised the essential concept of this nude, by suppressing the head, arms and legs, leaving only the compact volume of the body.