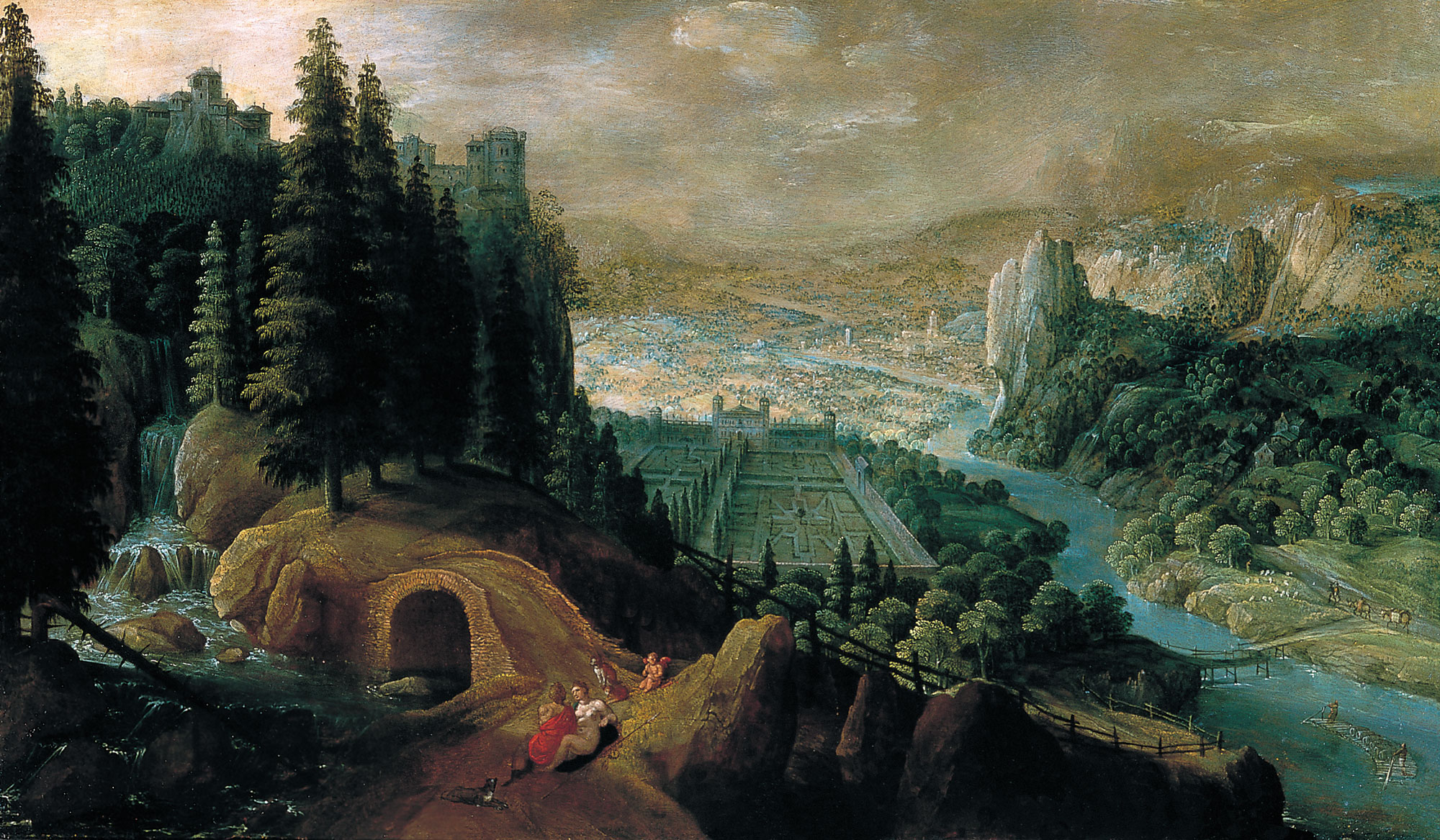 Viewed from high on a wooded mountain, a river valley stretches away to a distant horizon. A rushing stream and tall pines cover the mountain that rises on the left to peaks surmounted by castles. A road with a stone bridge fills the foreground and descends along an escarpment to the valley below. In the middle distance an elaborate palace with tree-lined alleyways and walled formal garden appears on the banks of the meandering river. In the distance rocky promontories and glimpses of other towers punctuate the misty valley. In the foreground Venus and Adonis are seated in intimate communication at the side of the road with his hunting dogs and a winged cupid nearby.

Although Verhaecht is reported to have visited Italy (see Biography) and one of his drawings depicts a Roman scene, his paintings and most of his drawings are clearly rooted in the Northern landscape tradition of Pieter Bruegel the Elder and the Mannerists. Like many of his paintings, the present work depicts an imaginary mountain landscape typical of the Weltlandschaft tradition inaugurated by Bruegel’s drawings of soaring alpine views. These designs were widely disseminated by Hieronymus Cock’s well-known engravings of the Grossen Landschaften series of c. 1555. Several features of the present design descend from images: the elevated point of view, the plunging river valley with towering, craggy mountains topped by castles, as well as specific space-enhancing devices, such as the shadowed escarpment with silhouetted fence in the foreground. Many of these compositions also inspired Verhaecht’s drawings of mountain landscapes; see, for example, theAlpine Road with River Valley, Albertina, Graphische Sammlung. There is no reason to assume that Verhaecht painted his mountain views during the period, presumably in the 1580s, when he himself was probably crossing the Alps. Indeed he dated mountain landscapes and drawings as late as 1620, long after he had returned to Antwerp; see the Mountain Landscape with the Hunt of Maximilian I, monogrammed and dated 1615, Brussels, Koninklijk Museum voor Schone Kunsten, and the drawing dated 1620, Hamburg, Kunsthalle.

The practice of placing biblical or mythological figures in the landscape can be traced to the pioneers of landscape painting, such as Joachim Patinir and Herri met de Bles. More than mere staffage, these figures can convey moral meanings, which are reinforced or revealed by elements of the landscape. In the story of Venus and Adonis she advises him not to hunt dangerous game but he ignores her and is slain by a wild boar. The myth was interpreted by Verhaecht’s contemporary, Karel van Mander as an admonition to impetuous youth, who go to their ruin if they fail to heed divine counsel. In one of Hieronymus Cock’s engraved Weltlandschaften Venus grieves over the slain body of Adonis while a boar hunt unfolds in the distance. In the present work we see the prelude to the tragedy, as the nude Venus imparts her intimate counsel to the wilful Adonis.