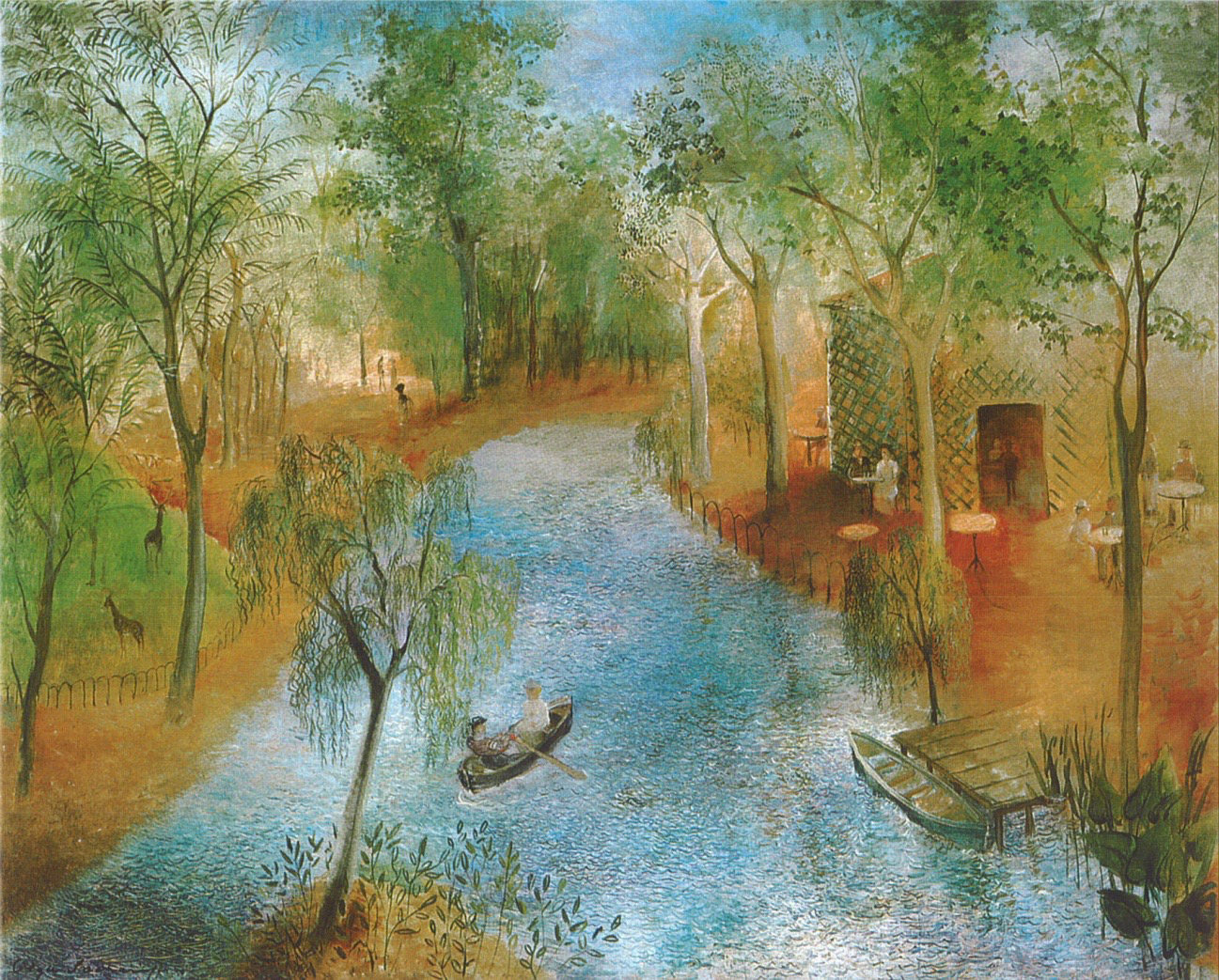 Once she had settled definitively in Barcelona in 1939, Olga Sacharoff specialized in portrait painting – most of which were commissioned by members of the cultured bourgeoisie – as well as landscapes, still lifes, flowers and interiors. Because of her relationship with the local artistic world and, in particular, because of her landscapes, the critics included her amongst the creators within this genre, which took root in Catalonia from its take-off at the beginning of the century under the influence of French painting.

The painting ldyllic Landscape, which is undated but possibly from the early 1950s, does not correspond to the reality shown inasmuch as the viewpoint is excessively high, the shadows do not follow the same direction and the sizes of the figures and animals, and part of the trees and plants are not proportionate. lt depicts a wild garden in a zoo, where we can see a number of fenced-in exotic animals, a kiosk and sorne passers-by. This theme might have been inspired by Barcelona Zoo and the garden that the artist and her husband had in their home. Olga Sacharoff had worked with this motif on previous occasions (such as in The Zoo, oíl on board, c. 1948, prívate collection). but in this painting the vegetation and the artificial river are the protagonists rather than the people and the animals, as was the case in the previous pictures, in which the artist usually adopted a frontal viewpoint, unlike the very high viewpoint of this work.

The treatment of the vegetation (the poplars, the young willow on the small island in the foreground, the rushes and the ornamental plants next to the jetty and the other plants growing on the banks) is very similar to that of other contemporary paintings (El baño, oíl on canvas, c. 1953, private collection) and other subsequent ones (Caballos en un lago, Oíl on canvas, c. 1958, private collection), and it recalls that of the landscape paintings of the south of France that the artist painted in the 1930s. The long and very diluted brushstrokes predomínate in the two lateral triangles of the green a reas, while in the third triangle of the composition, that of the river, curved and saw-toothed touches prevail, to simulate the movement of the water on the blue Surface.

lt is possible that Olga Sacharoff painted the picture in her studio and in only a few sessions. This conjecture is based on the speed of the execution, which can be appreciated from the large colour stains that cover the light priming, which we can glimpse in particular behind the poplars at the back, and the barely outlined figures, as well as from the fluency and details of the colouring – the latter is the result of applying the oíl onto the layers while they were still wet – giving it the aspect of a pastel, a finish that the critics highlighted as one of the values of this painter’s style.

The placidity of the theme of this painting together with the careful balance of the distribution of the colours and shapes transmits a sensation of calm, wellbeing, rest and stillness, goals that Oiga Sacharoff sought throughout her life and work.

Landscape with street and houses