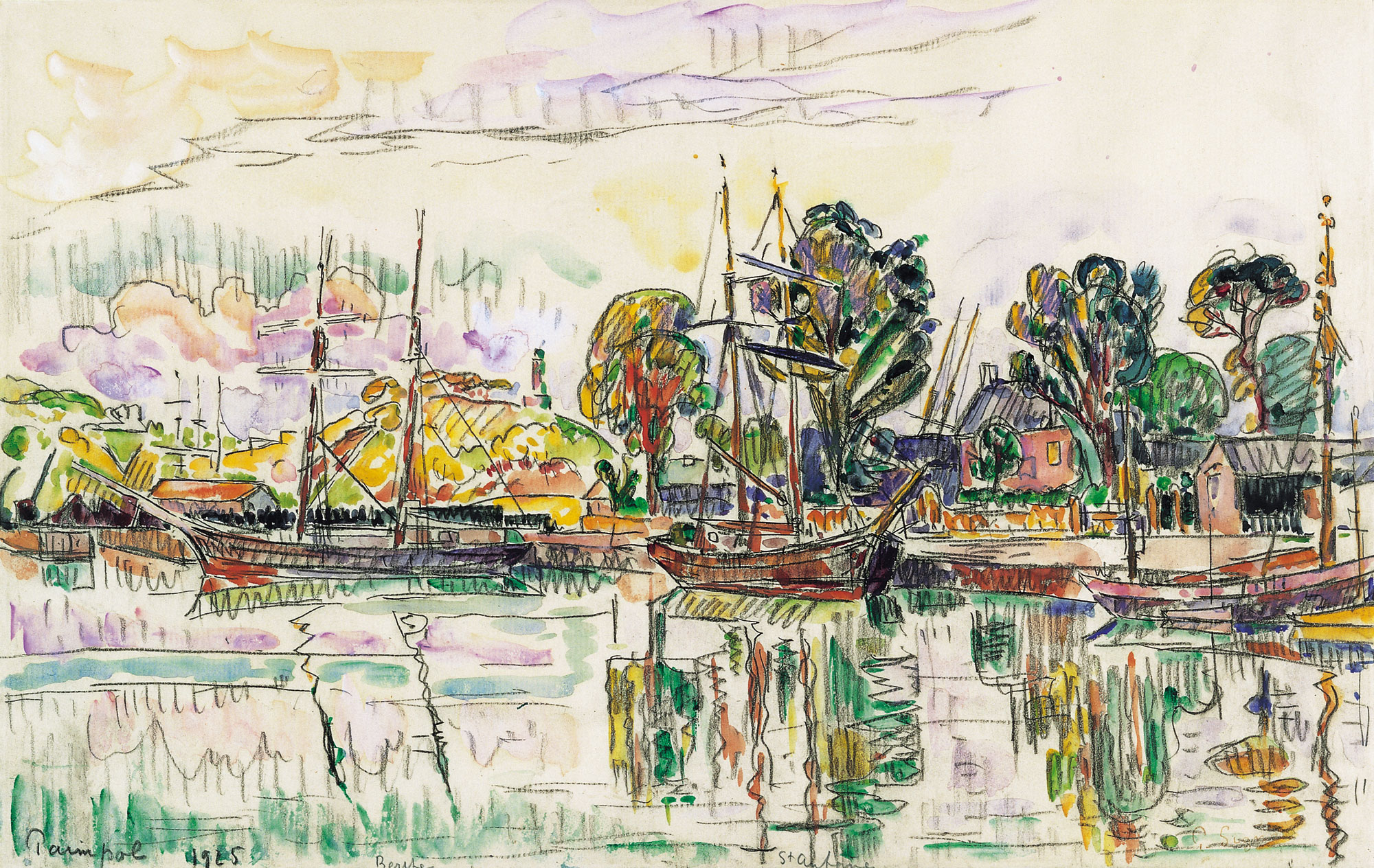 Watercolor and charcoal on paper

From about the year 1910, Signac dedicated the most creative and successful part of his work to watercolours, and from 1920 he travelled the length and breadth of France, watercolour book in hand, fixing its landscapes with the eye of a passionate admirer. In 1925, when he painted this work, Signac had therefore completely mastered the art of watercolour painting, which he practised almost every day when he was not retained in Paris by the organisation of the Salan of the “Société des artistes independents.” Throughout the years, he established a method which would no longer evolve, and of which he included the principies in a monographic work dedicated to Jongkind, he too a great watercolour painter and “friend of the boats and the wind”.’ This watercolour encloses perfectly all those principies. Signac advocated the use of a smooth paper which enables the tip of the brush to run free and recommended first making quick drawing in pencil. He condemned the overlapping of shades, which compromises the purity of the colours, and insisted on the importance of the whiteness of the paper, which has to appear not just through the paint, but also between the brushstrokes, in order to emphasise them. Signac had in mind to illustrate in such a way the Memoirs af a Taurist, by his dear Stendhal, and finally devoted his efforts to a series of Parts of France, his last important project which kept him busy from 1929 to 1931.

Between 1924 and 1932 he sojourned regularly in Brittany, in the village of Lézardrieux, where he rented a house. The various watercolour studies of Paimpol and Saint-Malo, situated not far fromthere, belong to that period Signac often travelled to Saint-Malo to admire the famous “Terre-Neuvas” which left the Breton port to go fishing for cod along the coasts of Newfoundland, a long and dangerous voyage which inspired Pierre Loti for his famous novel An Iceland Fisherman. As for Paimpol, it was the main centre where those ships were fitted out for deep-sea fishing. The artist represented here two schooners of which he annotated the names: “Saint Antoine” and “Berthe”. Berthe appeared often in the views of Paimpol painted by the artist during that period It is an old fashion schooner, built in 1901 for coastal shipping by the ship-owner Rivollan, from Paimpol, and which was still used in 1914. As for the schooner Saint Antoine, it was probably one of the large ships meant for cod fishing in Iceland. On top of the hill overlooking the port, Signac depicted the tower of Kerroc’h, built in remembrance of those who “perished at sea.”