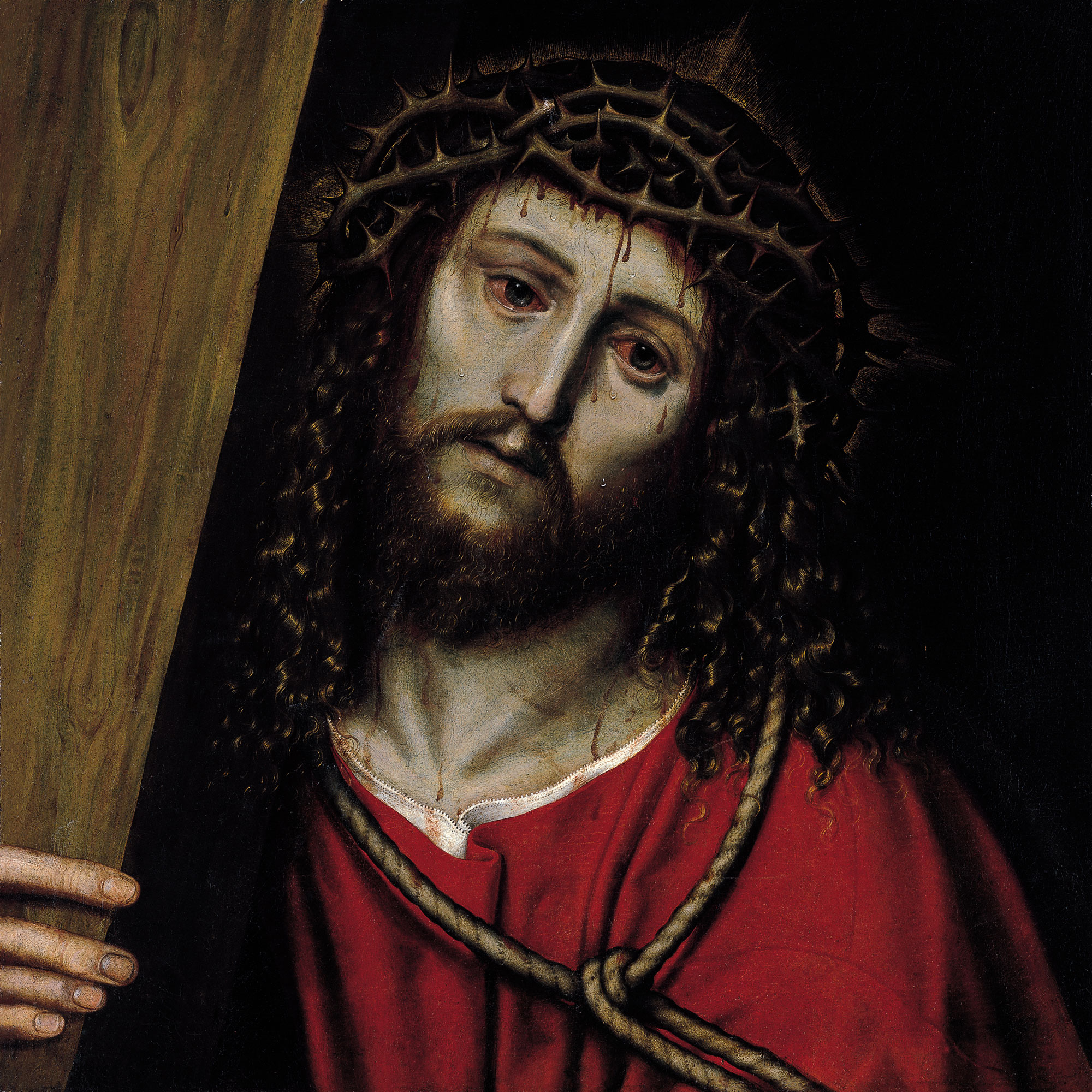 Dated and signed on back: ''1574. NICOLA US. FRANGI PANS. EMI. Al Ticiano''.
Carmen Thyssen-Bornemisza Collection on loan to the Museo Carmen Thyssen Málaga

This painting, unpublished until recently, is one of the few signed and dated paintings by Niccoló Frangipane. Apparently, the artist did not always use the same signature, since the David Meditating before the Head of Goliath, from the Museo Civico in Padua, has the inscription Ni.F.P.F.

The subject of Christ carrying the Cross to Golgotha is the most frequent in Frangipane’s known works. There are nine versions of this matter, with some variations in the composition, since there are two examples in which the figures are represented full length -one in the Cappelletta di Santo Gesú in Gandino and the other in the Sacristy of Santa Margherita in Brusoporto, Bergamo- while in the remaining paintings, Christ appears half-length accompanied by some figures, like executioners, Mary Magdalen or St. Veronica. This is the case of the works belonging to the Doria-Pamphilj Gallery in Rome, although the example closest in time to the one we are dealing with is the Christ Carrying the Cross at the Museo Civico in Udine, dated in 1572. Frangipane’s treatment of this type of scene is related to theChrist Bearing the Cross of the Scuola de San Rocco in Venice, a painting once belonging to the church of San Rocco which Vasari attributed in 1550 to Giorgione, although in the second edition of the Lives (1568) he mentioned it as a work by Titian. This painting was very well known in that period, being the object of great devotion, since it was attributed with miraculous powers; that is why so many artists found inspiration in it throughout the 16th century. In this occasion we can consider that Frangipane drew from this composition, although he moved away from the narrative aspect of the subject by concentrating his representation on the isolated image of Christ, thus emphasising the pathos of the moment. Christ, who faces the beholder, was conceived as a half-length figure, with his head crowned with thorns and slightly bent to the left, dressed with a red tunic revealing the edge of white underclothing, and with a rope knotted on the chest. Drops of sweat and blood run down Jesus’s sorrowful face. With his right hand he grips the cross, of which only a fragment of the upright is visible. The Nazarene -or Christ bearing the Cross, orPortacroce– is a traditional image of devotion, whose iconography goes back to Paleochristian art. Although in its remotest origins the subject was given a fundamentally symbolic meaning, and the cross, more than an instrument of martyrdom, was the symbol of the triumph of the Redeemer over death, from the 13th century onwards the narrative and dramatic aspects of the scene began to be emphasised. This latter interpretation rapidly increased in the second half of the 16th century, when the Counter-Reformation saw in the use of images a means of influencing the minds of the faithful. Sebastiano del Piombo and Titian, in Italy, and Luis de Morales and El Greco in Spain, were some of the painters who produced works of this kind, and reflected the success of subjects regarding the Passion in that period. In this occasion Frangipane sets off the effigy of the Nazarene against a dark background, which enables him to emphasise the figure’s dramatic quality and feeling of loneliness, while at the same time he abandons the idea of defining a specific physical space, since his aim is not that of narrating the Biblical event, but of representing a devotional image. The artist places special emphasis on expressing both the physical and psychological suffering of Christ. That is the reason why he shows such an interest in the detailed description of the heavy crown and its sharp thorns, and in the representation of the blood dripping down the face and body of Christ, giving special importance to his tearful red eyes which express intense pain and a silent surrender and resignation before the sacrifice. The construction of Frangipane’s painting recalls, rather than the Nazarenes of Giorgione and Titian, the examples of Sebastiano del Piombo, in particular those of the Prado and of the Hermitage; nevertheless he deals with the subject with greater realism than the previously mentioned Italian painters or El Greco, probably because in its execution we can appreciate the influence of northern models, as happens in the paintings by Morales. The precise brushstroke and the detailed rendering qualities, from the rigidity of the crown to the soft shine of the locks of hair, draw from the aesthetic principles of Flemish art. In spite of this, the chromatic intensity of the red cloak and the importance of light, particularly in the treatment of the face of Christ, link this painting closely to the Venetian world in which the artist was trained.