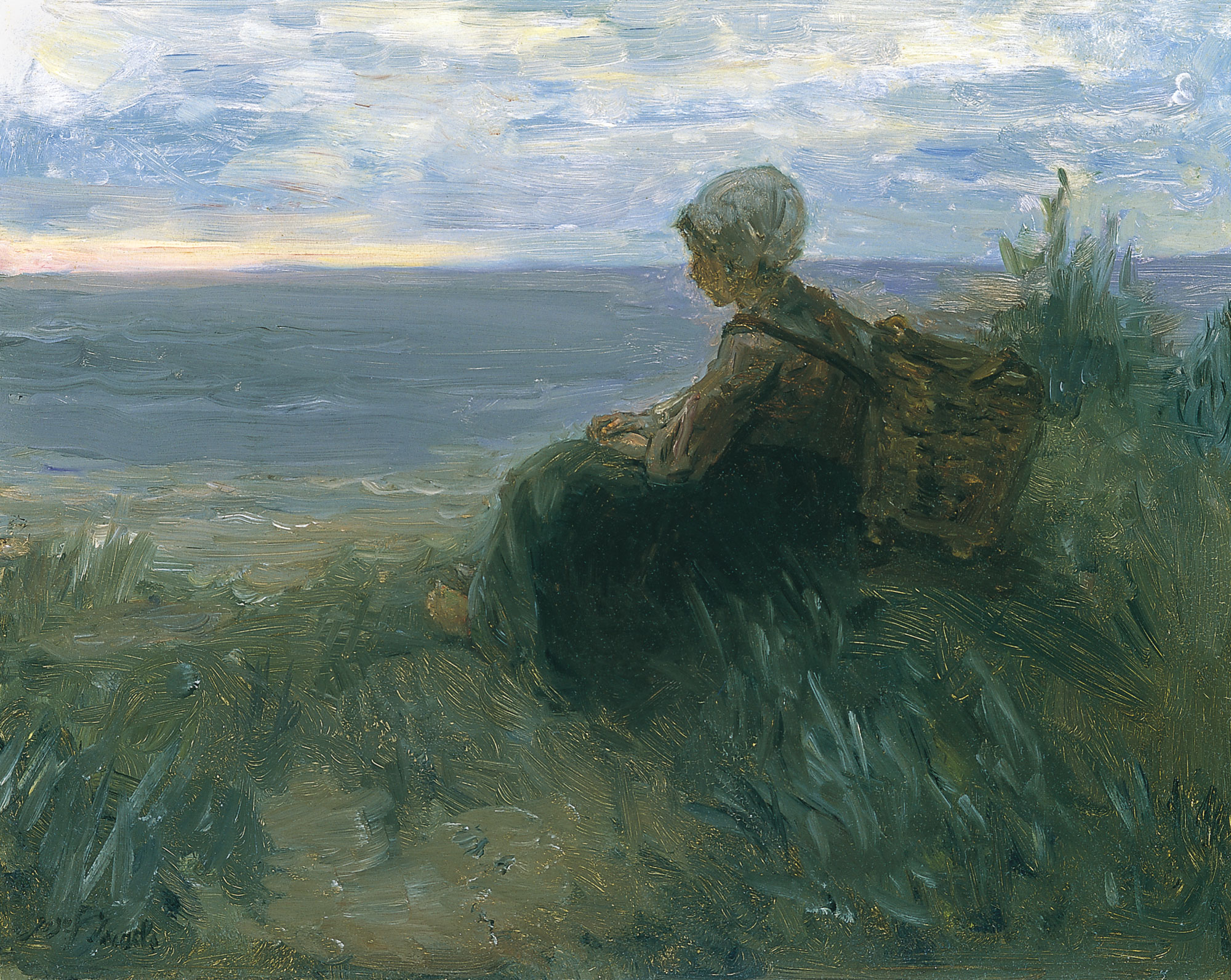 A Fishergirl on a Dune Top Overlooking the Sea, ca. 1900

When Jozef Israëls became one of the most outstanding Dutch artists of international renown, he already had a long career behind him. After having worked at the workshop of the portrait and historical artist Jan Adam Kruseman (1804-1862), and having studied at the Royal Academy of Amsterdam, Israëls went to Paris to continue his training at the workshop of F.E. Picor (1786-1868) and at the School of Fine Arts.

When he began his artistic career, Israëls painted, above all, historical pictures and works based on literary themes. However, they were not always well received, and so, following the footsteps of various German and English predecessors, he began to devote himself to depicting the specialised theme that would lead him to acquire international fame: fishermen.

The view of the beach at Zandvoort he produced in 1855 inspired him to represent the joys and sufferings of the local fishermen. In the years that followed he produced a number of realistic scenes featuring sentimental overtones, such as Visit to the Mother’s Grave, in which we see a fisherman standing with his two children in front of his wife’s tomb. Israëls also knew how to depict the girls and women standing on the dune-tops, scanning the sea as they awaited their loved ones, brothers, fathers or children. This motif was common in literature and refers to the mythological tale in which Ariadne, the daughter of the King of Crete, waited in vain on the beach for her loved-one, Theseus, to return.

After 1857, Israëls painted innumerable variations on this theme, featuring titles such as Expectation, Returning Home, Scanning the Horizon or Waiting. The number of characters and their occupations varied. Many of the women are depicted mending nets, whilst others are sewing, darning or bleaching clothes. Israëls employed various techniques: we know of versions in oil, not to mention watercolours, etchings and pencil drawings. The style of painting presented in this exhibition differs considerably from that of his earlier versions, which were more detailed and painted with warm shades. The free brushstrokes and sober application of colour indicates that this canvas dates from around the turn of the century.

Over the course of the artist’s fifty-year career, numerous changes took place. The painter moved his place of work from Zandvoort to Katwijk and Scheveningen, and he himself moved to the Hague, a city that had become an important artistic centre. At his workshop on the Koninginnegracht, the artist had a corner built that reproduced the inside of a fisherman’s house, so that he could work with models.

The public’s reaction to his fishermen’s wives on the dunes also witnessed a significant change; whilst the first version of Waiting was criticised at the Brussels Salon and the Exhibition of Living Masters in Amsterdam as an aberration, the latter versions were extremely popular both in the Netherlands and abroad. Israëls, who could hardly meet the demand when he achieved international fame in the 1870s, began to paint, in addition to his works based on free-ranging themes, lesser works of rapid execution featuring popular themes, produced exclusively for sale. In addition to children playing on the beach -with toy boats made of clogs- and seamstresses in a fisherman’s house, the theme of women waiting on the dunes continued to form part of his most common range of motifs. Jozef Israëls came to be identified so closely with the motif of the fisherman’s wife that, when he died, the famous caricaturist Albert Hahn devoted a sketch to him in which the artist himself appeared on the top of a dune whilst gazing out over the immense surface of the sea.