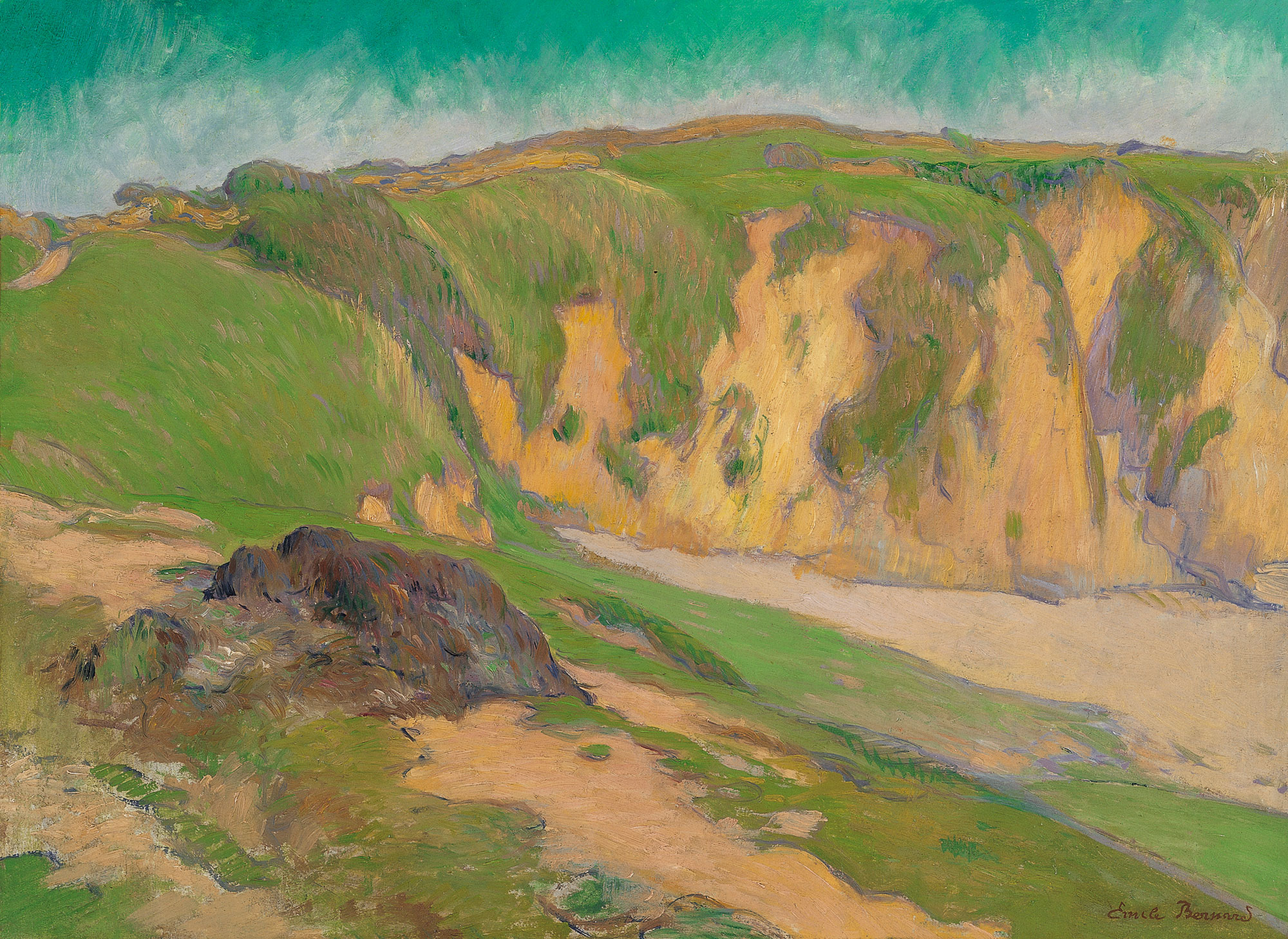 Oil on cardboard pasted on panel

In 1887 the Parisian circle of the young Émile Bernard included three painters who, like him, had studied at Cormon’s atelier: Vincent van Gogh, Toulouse-Lautrec and Louis Anquetin. In March 1887, Van Gogh, who owned a very large collection of Japanese prints, exhibited them at the Café Le Tambourin. During that spring and directly influenced by that exhibition, Bernard and Anquetin developed a new style that moved radically away from Impressionism and from the Neo-Impressionism of Seurat and Signac (in which Bernard had briefly taken an interest). This new style would become known as cloisonnism due to its similarity to the appearance of cloisonné (enamel inlaid in sections), so called because of the way in which colour was laid in flat areas, within compartments (cloisons) formed by small fillets of metal. In the summer of 1887 Bernard returned to Brittany, a region he had visited the previous year and found fascinating. He took lodgings in Saint-Briac and Pont-Aven and visited the coastal village of Le Pouldu, about twenty kilometres from Pont-Aven, on the mouth of the Quimper River. Situated between Lorient and Concarneau, Le Pouldu is the first beach of the Finistère peninsula. It is not a true port as the river is difficult to navigate with currents that are sometimes very strong and sandbanks that shift from one season to the next. A number of cliffs and extensive dunes look out onto the often rough ocean. At the time in which Bernard became acquainted with this strange and wild resort, its inhabitants made a living from collecting seaweed and objects that the sea washed up on the beaches, which they transported on a kind of horse-drawn sledge. These occupations, as well as the costumes of the local women of Le Pouldu, in particular their large black bonnets, would fascinate Gauguin, who between 1889-1890 spent long periods of time here.

Unlike Monet’s treatment of the cliffs on the Normandy coast, in which the ocean always imposes its presence and shown as light or dark, calm or rough, Bernard turned his back to the ocean and looked inland. The cliff, that rises up like a wall in the foreground, with its folds, recesses acquires an almost anthropomorphic appearance, like a recumbent body, as in Degas’ rare landscapes. Also evident is the influence of Cézanne, as well as that of Gauguin (even though the personal relationship between Bernard and Gauguin was only just beginning at this time) in the systematic brushwork and the construction of the volumes of the terrain. Unlike Bernard’s other works of the same period, which are radically flat and simplified in their drawing and colour, this landscape is more naturalistic in its palette, in the subtle modelling of the terrain and in the representation of the space.