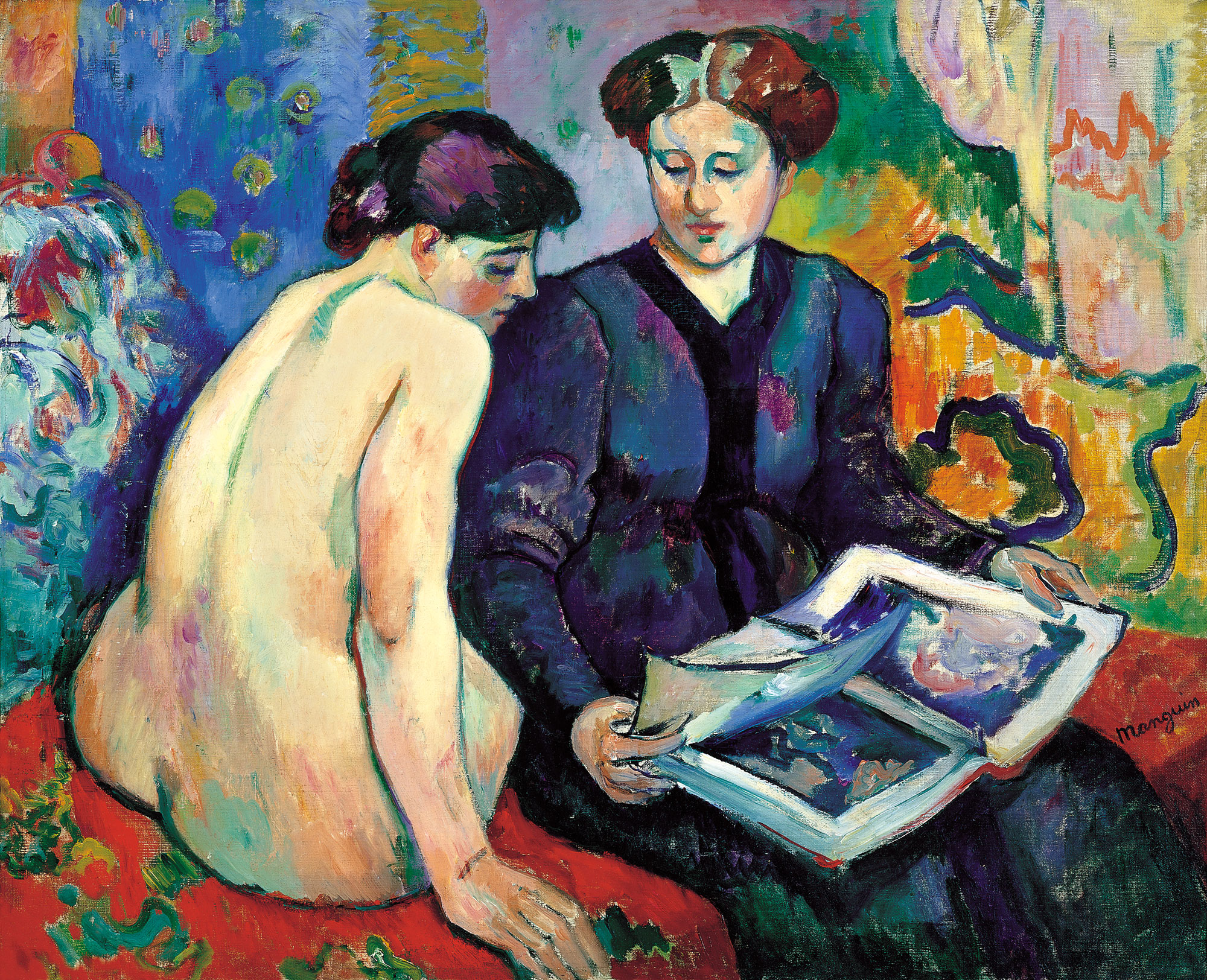 The Prints is probably one of the most ambitious paintings Manguin executed in 1905. The composition’s complexity is not apparent at first sight. Two women seated on a couch or a narrow bed, one dressed, the other naked, look at a book with colour illustrations in an interior lavishly decorated with hangings; Manguin has composed the scene by sitting them opposite each other. In order for the book to be their common focus of attention, they both have to turn their bodies and heads; the torsion is greater in the naked woman, of whom we see the back and the profile of the face. Both figures represent the same model: Jeanne, the artist’s wife.

Ever since Delacroix’s Women of Algiers, a composition with women seated in an interior was inevitably a challenge for a French painter, particularly if he was, as in the case of Manguin, an alert reader (and friend) of Paul Signac. Yet, although the composition of The Prints does not ignore Delacroix’s precedent, it responds to stimuli closer in time, particularly that of Matisse. After the scandal of the fauves’room in the Salon d’Automne, Matisse had rented a studio in Rue de Sèvres where he started working on Le Bonheur de vivre. The Prints shows similar concerns to those present in Matisse’s paintings during that autumn, in which Manguin was very close to him. It also shows, through Matisse, a relation with Ingres, whose retrospective exhibition (68 works), held in the same Salon d’Automne where the controversy took place, had been a revelation for the young avant-garde artists and the main stimulus for the beginning of Le Bonheur de vivre. The nude in The Printsclearly echoes the one playing the zither, seen from the back, that is depicted in the foreground of The Turkish Bath, itself the transposition of an archetype of which the first example is the famous Bather of Valpinçon, in the Louvre. Yet, in Ingres’ rendering, more important than the references to single figures are the aspects of composition and space in The Prints: the exaggerated deformations of the foreshortenings and the spatial ambiguity in the interaction of the bodies in order to create an effect of depth without perspective are stylistic features that Matisse and Manguin discovered in the author of The Turkish Bath.

These are so far the affinities between Manguin and Matisse in the autumn of 1905. From here on, The Prints also shows the beginning of a profound divergence. Its most evident symptom is Gauguin’s influence in Manguin’s painting. The above-mentioned nude seen from the back owes much to Ingres, but it also clearly recalls Gauguin, particularly his nude in Woman by the Sea (Vahine no te miti) of 1892, a painting included in the Gauguin exhibition organised by Durand-Ruel in 1893 which had made a deep impression on Matisse and Manguin, who were then studying at the Académie Moreau. The same subject of women seated opposite each other is to be found very often in Gauguin’s paintings of Tahiti, with an effect on the construction of the pictorial space very similar to the one attempted by Manguin in The Prints. Gauguin’s influence can also be detected in the choice of colours, in his depiction of light and shadow through chromatic contrasts in the feminine figures, and in the background fabrics, whose arabesques, iridescences and reflections floating in space evoke, with Proustian efficiency, an atmosphere of intimacy.

To conclude, the subject of The Prints recalls Bonnard and Vuillard, Nathanson andLa Revue Blanche, or Degas; attitudes that combine modernity with a radical and intransigent sensuality. It is not surprising that, strengthened by such a close and rich artistic past, Manguin refused to follow Matisse along the path of dematerialisation and violence that the master from Cateau-Cambresis would take the following year.