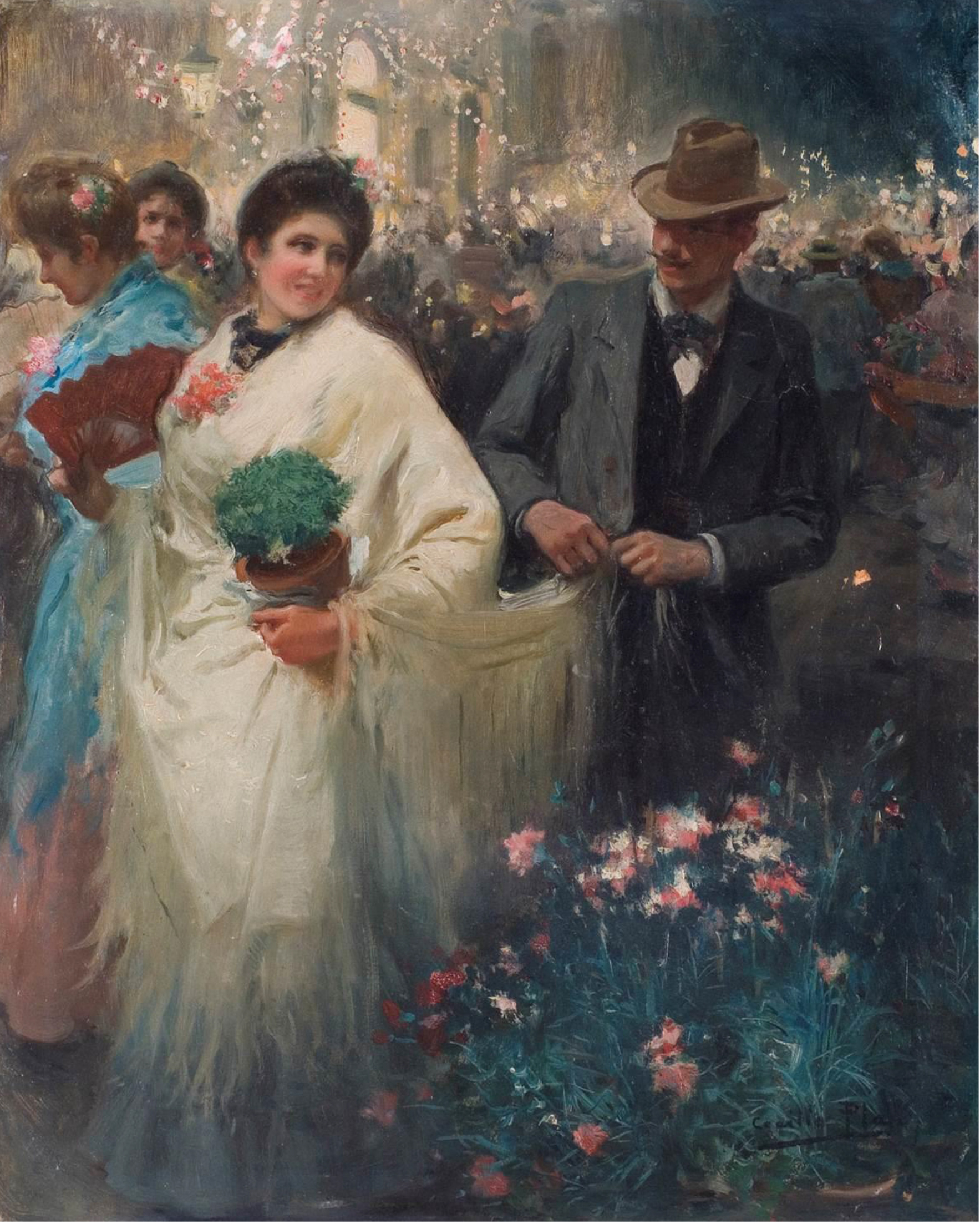 Oil on paper glued to canvas

Pla cast his eye over a number of themes but it is in anecdotes, everyday life and melodrama where he found his greatest inspiration. His genre painting is neither of the “local colour” kind typical of the previous generation, nor of the idealism of the new generations of artists (including Zuloaga and Romero de Torres), but of a kind connected with contemporary life. He paid close attention to the working and middle classes socialising and at their leisure with their families and also to the problems often inherent in family life. On occasion this led him to depict Madrid in a manner reminiscent of the light operas of his time. Pla’s personages might be seamstresses, nannies, washerwomen, flower sellers… and their surroundings: at home, in coffee shops, strolling, at open-air dances and festivals (verbenas), or in those typical Madrid buildings with floors of small dwellings on running balconies around a central courtyard called corralas… His is the genre painting of the typical working-class Madrid that is so often depicted in the light-opera style mentioned above, with carefree, decent women attending verbenas and fiestas in colourful embroidered silk shawls and men of all social stations totally at ease in such surroundings. Bourgeois elegance and modern chic also have a place in the broad iconographic repertoire of Pla’s urban types. To a certain extent his world links in with that of Galdós, or possibly comes closer to that of Pardo Bazán. In this respect, José Francés very perceptively pointed out certain similarities between Pla’s themes and Benavente’s theatre, while Lafuente Ferrari was later to stress those literary associations and the greater of lesser degree of their Modernist facet. Like those light musical works, Pla reflected the conflicts and circumstances prevalent in life in Madrid at the turn of the century.

The varying stages in love relationships, from seduction to strife, is a discourse which Pla developed in the course of his career as an artist, although he normally gave priority to the more positive side. Whereas in large-format canvases like Bond of Matrimony (1895, Madrid, Museo Nacional del Prado) he often depicted the melodrama of marital strife, in works like The Verbena he painted cheerful, light-hearted scenes involving young people at dances or chance encounters on public holidays in urban settings at night, with streets decorated with lights reflecting lively, noisy night-time atmospheres. Such pleasant images of the city, despite the melodrama, were records of urban life. Pla is known mainly as a painter of light-filled scenes, particularly with his views of beaches, but that is only one aspect of his oeuvre, for he was also a painter of the night, as is confirmed by several canvases and small studies with scenes at night. These, however, have nothing in common with the seedy scenes of night life produced by the avant-garde and bohemian artists of his time. For Pla verbenas or coffee shops, much more than cabaret, were ideal settings for such scenes and there is little room in his iconography for degeneracy or decadence. When Pla’s women overstep the mark, there is usually a confessional or church nearby where they can go in and repent. Whatever the case, for him fiesta nights were conducive to recreation and idle pursuits, as this painting shows.

This is a scene of a chance encounter between a local village girl in an embroidered shawl and a young dandy who happens to be passing by. In profile on the left, a second young woman, with fair hair and a blue shawl, appears to be unconnected with the main action, whereas a third, almost hidden in the background stands staring curiously at the encounter. The young man presents a well-groomed image: he wears a jacket, waistcoat, bow-tie and a hat that is tilted slightly forward and casts a shadow over part of his face, giving him a more seductive air. He also sports a well-trimmed moustache and his hands are delicate and thin. Beside the girl are a number of pots of carnations belonging to a flower seller, from whom she may have bought the plant she holds in her hand. The main point in the story or anecdote in this painting, however, is that the man has snagged the fringe of the girl’s shawl with his jacket button and that this simple incident could give rise to a change in the course of the fiesta and indeed in the lives of both. The young man disengages the edge of the shawl yet at the same time holds onto it, and the brushing together of the two garments becomes, to use a word greatly in keeping with Pla’s work, a bond. Like a fish, the young man has been snared in the net of the shawl. The young woman is powerless to remedy the innocent accident, for in one hand she holds a striking red fan that contrasts with the light colour of her shawl, and in the other the plant which she bought at the fair: an azalea, traditionally purchased by women at verbenas or processions to adorn the balconies or interiors of their houses. Although trivial, all these details express a certain kind of attitude and sensitivity. The young woman turns her head and bestows a sweet smile upon the young man, who, instead of looking down at the button he is disentangling, directs his gaze towards the girl’s face, seeking her eyes. Who knows if the two had exchanged glances before but now chance has made it possible for them to speak and it is this moment, the prelude to the flirting, that Pla wished to capture in his oil painting.

This sweet, sentimental story is told amusingly, but the artistic treatment of the painting as a whole displays the mastery with which Pla captured such details as nocturnal urban perspective, dominated here by the illuminated backdrop of a decorated public building, probably a ballroom or dance hall or the entrance to a casino (from which the handsome young man may have just emerged). Although the main group fills the foreground, also interesting is the urban landscape, through which Pla displays his great skill and a fondness for reflecting synthetically the crowded effect of the street, just as he did with his sunlit views of Malvarrosa in Valencia. In this painting Pla applied loose, very confident brush strokes almost in the Impressionist style with the details of the landscape and the flowers, which also proves very effective in suggesting synthetically the hustle and bustle and vigour surrounding such celebrations. The colour is harmonious and well-balanced, for Pla had great technical skill in colour studies. The pink of the shawl and the green of the jacket complement and blend with each other symbolically. The composition of the girl’s face, in a formal characteristic of what might be described as an expression of Modernism by the Valencian painter, is slightly diffuse, while her sweet smile is typical of the smiles of all the women in Pla’s production. The painting can be dated at around 1905.