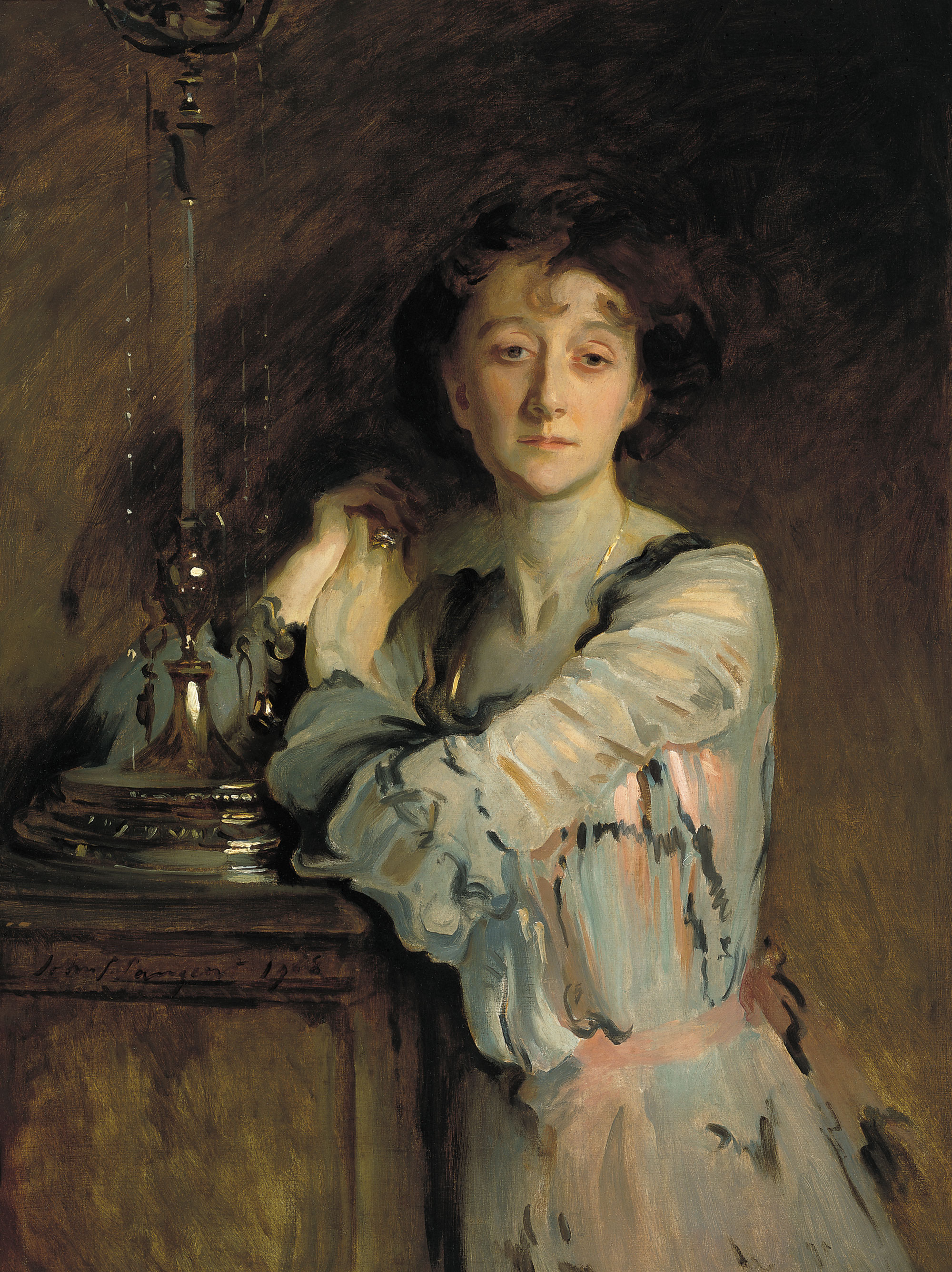 John Singer Sargent first painted Mrs. Charles Russell in 1900, exhibiting the portrait (San Francisco, California Private Collection), among his eight entries at the Royal Academy the following year. He was at the apex of his career as a portrait painter, but would soon turn away from the profession, tiring of painting images of the fatous elite. His portrait of Mrs. Russell, however, the critics quickly noticed, was a singularly haunting, introspective image, a portrait that provoke a number of unanswered questions. “What he tells us of this pathetic face is very interesting and very sad,” wrote one reviewer, while another observed that “the face is of extraordinary, character, infinite pathos, and a masterpiece of painting [ … ] the face haunts Lis, with its sad eyes and intellectual distress. Who shall read the secret so surely set there?’

Little is known of the enigmatic sitter. Mrs, Russell, neé Adah Williams, was the granddaughter of Sir Joshua Walmsley, one of the founders of the London Daily News. In 1889 she married Sir Charles Russell, a union that produced a single daughter. Her husband was a solicitor, best known today as instructor for Lord Carson during the trial in which Carson successfully defended the marquis of Queensbury against the charges of libel brought by Oscar Wilde. The acquittal led to the writer’s own criminal prosecution, imprisonment, an early death in 1900, the year Mrs. Russell was painted.

Describing the painting in 1925, William Howe Downs wrote of the “nervous face, the long, slim neck, and the sensitive hands” as well as the sad eyes and mouth.’ The tense, nervous qua lit y found in Mrs. Russell, recent scholarship has pointed out, is a salient feature in many of Sargent’s portraits.” The perceptive critic, Royal Cortissoz, writing in 1924, considered it the very aspect that made Sargent “modern” and that it identified him with the spirit of his time. Each century, Cortissoz felt, had a prevailing impulse. While the mood of the 18th was “cerebral,” “nervous” was the quality of the 19th “What Sargent has had to portray has been a restless race,” he wrote, “the conclusively representative Sargent in this matter of modernity is the alert. “Mr. Boit” or the tense Mrs. Charles Russell”.

Two drawings are known to exist which relate to the painting, one in the Museum of Fine Arts, Boston, he other, in The Harvard University Art Museums. They capture the gesture of the sitter, but in each, the poignancy of Mrs. Russell’s features is only suggested. In the drawings, however, most noticeably in the Boston version, the hands assume a greater importance and reveal in a nervous fluttering of fingers, the apprehensive tenseness of Mrs. Russell.

The Carmen Thyssen-Bornemisza 1908 replica of Mrs Charles Russell, painted at the very time Sargent abandoned his career as a portraitist, remains as puzzling as the sitter. No mention of it seem to have appeared in the Sargent literature. More vivaciously executed than the 1900 portrait, it nevertheless duplicates, almost stroke by stroke, Sargent’s handling in the earlier version. Only the lamp, which still remains in the artist’s family, is indicated in a more cursory manner. The signature, which has been questioned as unusual for the artist,” is now placed below the ledge of the table rather than at the bottom left of the canvas-hardly typical in the work of a copyist. While few replicas of Sargent’s portraits exist, the artist twice painted Baron Russell of Killowen, Mrs. Russell’s father-in-Iaw, in 1899 and a replica in 1900. The one clue to the painting’s significance, the inscription “Alice Copley, Boston” on the back of the canvas, has so far proven unproductive.