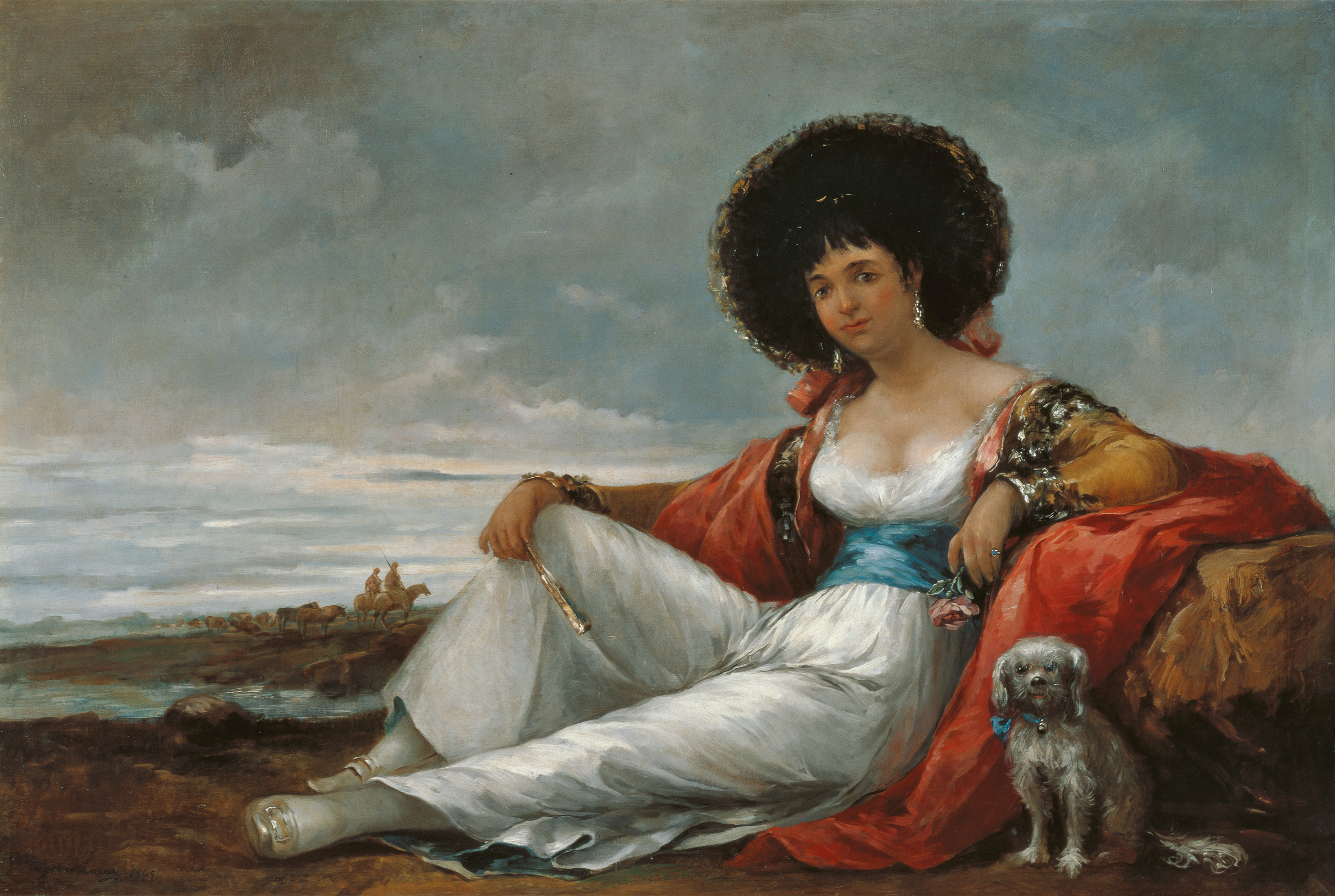 Exaltation of the maja as the female embodiment par excellence of the notion of what was genuinely Spanish was an important aspect of the works of 19th-century painters influenced by the art of Goya. It is therefore a common feature of the painting of Eugenio Lucas, undoubtedly the most faithful interpreter of the brilliant Aragonese artist’s aesthetic universe in Spanish Romantic painting.

Indeed, picturesque scenes of the lower-class, coquettishly dressed majas, nearly always in pairs or groups, displaying their skills at artful flirtation if not brazen provocation are particularly common in Lucas’s oeuvre and earned him great success among the clientele of his day, accounting for a significant part of his output. His culminating work is this important painting, hitherto practically unknown and certainly the most ambitious and spectacular of the painter’s known examples of this genre.

A young maja sits by a river in the open countryside leaning against a rock. She poses calmly, her black hair teased to stand out strikingly in the fashionable style of 1785–90 and adorned with a caramba, a type of satin and lace headdress that was all the rage at the time, albeit among ladies of a certain class, with large bows that dangle behind her neck.

Her clothing is equally striking: a short, close-fitting jacket worn open to show off the obvious sensuality of the revealing neckline of her dress, its folds draped suggestively over her body and a wide cummerbund tied around the waist. She wears satin slippers with buckles on her feet and her red shawl has slipped down her back. Beside her a small, woolly-coated dog with an alert, attentive gaze stares straight ahead with its beady, black eyes, immediately capturing the spectator’s attention.

Visible on the other side of the river are some herders leading a group of bulls to graze beneath a sweeping cloud-filled twilight sky.

The present painting is unique indeed in Eugenio Lucas’s very prolific career. On the one hand, its composition and considerable size make it the only as yet known example that bears a close resemblance to Goya’s model immortalised in the Clothed Maja, which it inevitably recalls both in the details of the woman’s clothing and in the attitude of her pose – in this case with a more veiled and restrained provocation – and in the emphasis on picturesque details of her appearance and colourful attire complete with fashionable accessories such as the fan and the flower she holds.

On the other hand, it is curious to note how the artist transposes to a rural setting what is an essentially urban female type who, owing to the erotic overtones of her character and the engaging familiarity with which she shows herself to the viewer, is usually confined to the semidarkness of a room, as in other paintings by Lucas on similar themes, although much greater prominence is given to the nude in these. The present painting, however, bears more of a resemblance to a small, much less ambitious work entitled Maja en el río (“Maja at the River”) signed by the artist in 1854, in which the model, with similar facial features, also poses beneath a cloudy sky by a wide river.

As for technique, in this painting Lucas employs a particularly rich palette in areas such as the maja’s left arm. The paint is applied in supple, dashing brushstrokes in the impasto, the sparkling reflections of the jewels, fabrics and metals, the bright, contrasting colours of her clothes which even recall the technique of some of Goya’s cartoons, and the silvery tones of the cloudy sky whose gradation creates a beautiful effect of distance. The whole landscape and the background figures are executed using a free, flowing technique which becomes much more crisp and emphatic in the woman’s face and in the modelling of her body shape through the folds of the dress. The rather listless inexpressiveness of her face contrasts with the liveliness of the friendly-looking little dog that accompanies her, which is captured with a surprising instantaneity and is also found in some of Goya’s portraits as a detail of female coquettishness.

The sitter’s features, which repeat those of another of the painter’s common female prototypes, have been identified by some as those of Francisca Villaamil, Eugenio Lucas’s partner and the mother of his children, although this identification is ungrounded3 as there are no existing portraits known for certain to be of this woman that allow even such a suggestion.

Lastly, the appearance of this painting by Lucas completed a very interesting link in the developmental chain of the iconographic prototype of the reclining maja as the sole and absolute protagonist of Spanish Romantic painting, viewed either as a symbol of provocation of erotic desire or simply as the exaltation of femininity as an object of visual delight. This links it directly to other Romantic paintings concerned with national identity, such as Maja of Sevilleby Gutiérrez de la Vega and the Naked Maja by Antonio María Esquivel. Lucas’s majais furthermore special in that she is clothed and thus embodies a genuinely Spanish female type compared to the more cosmopolitan post-Romantic artists such as Federico de Madrazo, Rosales and Fortuny, who transformed their majas into exotic odalisques.