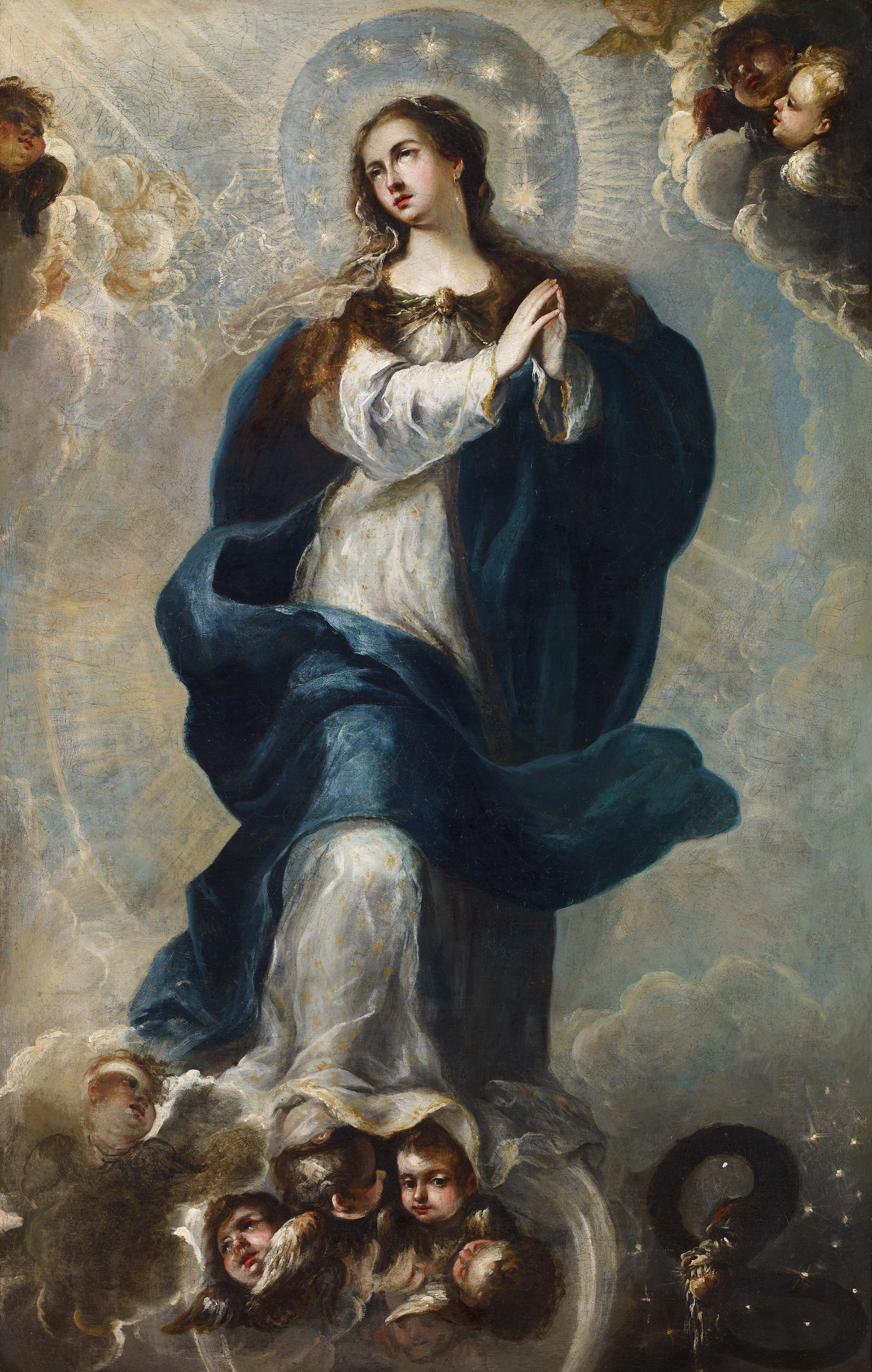 The theme of the Immaculate Conception is closely linked to the Spanish Baroque world. Intense popular devotion gave rise to the cult and fostered the iconographic development of this belief, which underwent a long, slow process before attaining the status of dogma, despite pressure from the upper echelons of power in Spain, including different monarchs and the ecclesiastic hierarchies. Over the centuries the popes granted spiritual privileges through various bulls or briefs to all those who espoused this doctrine, which did not become compulsory for the Church as a whole until 1708. On 8 December 1854 Pope Pius IX published the encyclical Ineffabilis Deus establishing as a Catholic dogma the consideration of the Virgin Mary as the only descendant of Adam and Eve to have been conceived without original sin.

This belief sprang up in the Middle Ages, especially after the founding of the two main mendicant orders, the Dominicans and the Franciscans, who rivalled one another in their Marian fervour. But whereas the Dominicans encouraged the veneration of the Rosary, the Franciscans became the main champions of the Immaculate Conception until the emergence of the Society of Jesus. The Jesuits and the Council of Trent (1545–63) consolidated its success in the Catholic realm, although it always enjoyed a more significant presence in the Spanish-speaking world.

The representation of the Immaculate Conception of Mary has been expressed in the art of different schools in two ways: through the embrace of Saint Joaquin and Saint Anne, the Virgin’s parents, outside the Golden Gate of Jerusalem; and as a female figure in heaven surrounded by angels and often by different emblems and symbols of Marian litanies, but not accompanied by the Child as the birth of the Virgin without original sin precedes her status as Mother of the Son of God.

The earliest known example was painted by the Venetian Carlo Crivelli in 1492 and is housed in the National Gallery in London. One of the most widely disseminated versions of the Immaculate Conception was inspired by the vision of St John in the Apocalypse, in which Mary is shrouded by the sun, crowned by twelve stars and with the moon beneath her feet. This became the most commonly used version following Trent.

This iconography attained a particularly high level of development in Spain, where the painter and theoretician Francisco Pacheco, Velázquez’s father-in-law, compiled an official definition at the behest of the ecclesiastical hierarchies in his book Arte de la Pintura published in 1649.2 Throughout the whole of the 17th century and the early decades of the 18th, it was a common theme in the output of the two main hubs of artistic activity in the Iberian Peninsula: Madrid, or the court, and especially Seville, where the devotion was particularly strong and where the most influential painter of the theme, Murillo, was active.

The present work is a delightful example of the representation of the Immaculate Conception and also of how it evolved stylistically and compositionally from the model established by Pacheco at the beginning of the 17th century. In this initial period the figure was conceived statically, with solid outlines, a flat, tight execution characteristic of the period and a significant presence of the symbols of the litanies of the Rosary around the Virgin. Owing to Murillo’s influence, over the decades, especially in the second half of the century, these images became more dynamic, based on the movement of the figure and the agitated design of the drapery. These qualities are found in the present painting, which can therefore be dated to the last decades of the century, a period to which its deft, loose technique and vibrant atmospheric tones also belong. The figure rises elegantly, clothed in a white tunic and blue mantle, in accordance with Pacheco’s rules, and as the apocalyptic Virgin surrounded by the sun’s rays, crowned with stars and the crescent moon beneath her feet. The latter symbol was probably originally a scholarly reference to the chastity associated with the goddess Diana, although after the battle of Lepanto Christianity interpreted it as an emblem of her victory over the Turkish crescent. Together with the moon, in the lower right corner of the composition is a twisted serpent, an allegory of the evil over which the Virgin is triumphant. The angels who accompany her, mostly cherubim, are arranged into only three small groups in the upper corners of the painting and beneath her feet, creating contrasts of dark and light that were very characteristic of the end of the century. The absence of elements alluding to the litanies and the scarcity of figures of angels are also consonant with the compositional models of the period.