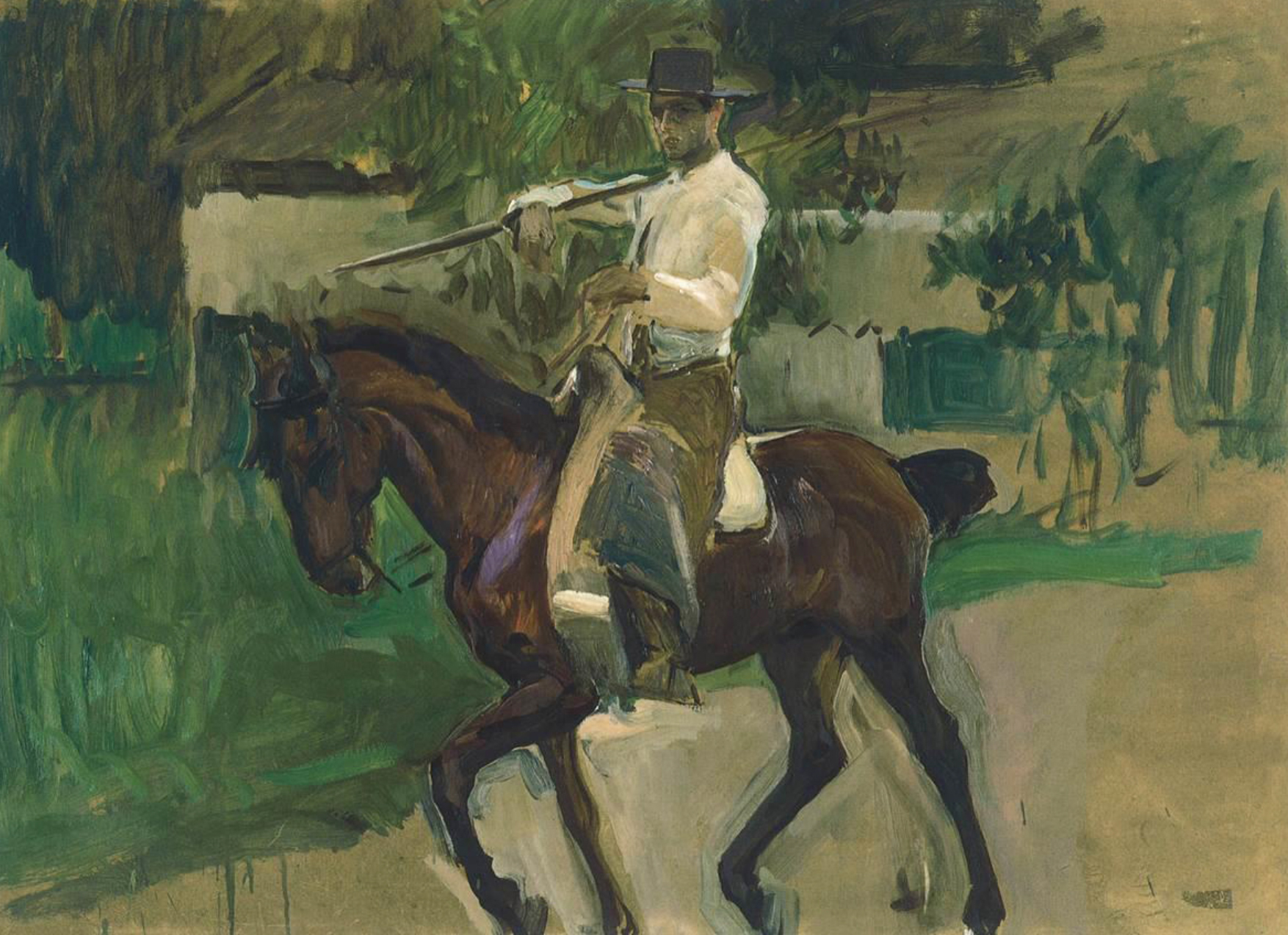 In October 1914 Sorolla began work on the preliminary studies for what would be his sixth panel for the decoration of the Hispanic Society of America Library in New York. One of the five works dedicated to Andalusia, it was entitled The Round-Up.

First he travelled to the El Cuco estate on the invitation of Sr. González to paint his vineyards and the gold tones of the harvest. According to the letters he wrote daily to his wife, during that week’s stay on the estate he painted ten studies of vines. However, he did more than that during that time, for after deciding that the town of Jerez was not the place to paint his picture, since, as he told his wife: “I would sicken from sadness”, he also made short trips around the region. Nor was it only a landscape of vines that he wanted for his background.

On a single day he visited Puerto de Santa María, Puente Real, San Fernando, La Aguada and Cadiz, where his friend Felipe Abárzuza was anxious to show him a ceiling painting he was working on. Sorolla was basically looking for countryside, vineyards and a sea background but that day he did not find what he wanted and decided to return to Seville. He prepared a large blank panel in readiness on the Tabladilla estate outside Seville, where the vegetation is typical of Andalusian dry-farming methods, and at the same time made studies of pita plants, prod-wielding cattle-drivers and olive groves. He also visited the Las Delicias estate, owned by the Mihura stockbreeders, where he sketched the bulls and oxen which he would include in his great painting.

In all, there are seven preparatory studies of cattle-drivers and horsemen for the Round-Up panel. Five are medium-sized and two are small sketches. The first group, with the figure of a single cattle-driver or horseman, are: this painting in the Carmen Thyssen Collection, Cattle-driver. Seville, which came from Sorolla’s estate and was inventoried (no. 13, series K) and allotted to his daughter Elena; Garrochista y toro (“Cattle-driver and Bull”), which, like the previous picture, came from Sorolla’s estate and was also inventoried (no. 14, series K) and also allotted to his daughter Elena; Garrochista (“Cattle-driver”), dedicated to his friend Miguel Hernández Nájera; Estudio de jinete entre chumberas (“Study for Horseman among Prickly Pears”), dedicated to his friend Andrés Sirabeña; and Jinete con fondo de chumberas (“Horseman with Background of Prickly Pears”), inventoried in Sorolla’s estate as no. 100, series Q, allotted to his wife Clotilde García del Castillo, and now in the Museo Sorolla Collection (inv. 1.091).

Of these five studies, the first three, which are all of cattle-drivers, are oil paintings on unprimed cardboard, while the other two – the horsemen – are oils on canvas. As the first group was painted on unprimed cardboard, they have by now taken on a certain gouache look which, without a doubt, is the reason why two of them (he did not know of the existence of the third) were attributed by Bernardino de Pantorba in his book La vida y obra de Joaquín Sorolla (“The Life and Work of Joaquín Sorolla” – Madrid, 1953 and 1970), with the wrong technique (see nos. 856 and 857 in his catalogue).

All of these studies for horsemen and cattle-drivers were begun on 31 October, as before that date Sorolla had been more concerned with finding backgrounds. He probably painted Jinete con fondo de chumberas and Estudio de jinete entre chumberas first but never made use of the figures in them. Logically then, and in line with the family correspondence, Cattle-driver. Seville, studied here, was painted between 2 and 5 November.

In this picture, the positions of the horse and cattle-driver are to a certain extent reminiscent of the horseman and pony in The Round-Up. However, the pony finally depicted is dapple-grey and is the same as that featured in the two other paintings with cattle-drivers. Sorolla used the brown horse with the cattle-driver on the left who, due to his position, however, bears a closer resemblance to the one in the study for Garrochista y toro.

In this work, which was swiftly executed and painted with oil thinned in turpentine, the natural colour of the cardboard is clearly visible, the effect being very similar to that achieved in the Boceto para Las regiones de España. Andalucía (“Sketch for The Regions of Spain. Andalusia”). The Round-Up, which can be seen in the Hispanic Society of America, is the only true gouache on paper.

Sorolla finished The Round-Up, the second-largest of the panels for the Hispanic Society, on 14 December. José Luis Díez wrote: “Such a mature process indeed gave rise to one of the most spectacular compositions found anywhere in the Hispanic Society, with several herdsmen driving a large herd of fighting bulls along a dusty road lined with prickly pears and across railway lines in the foreground.”