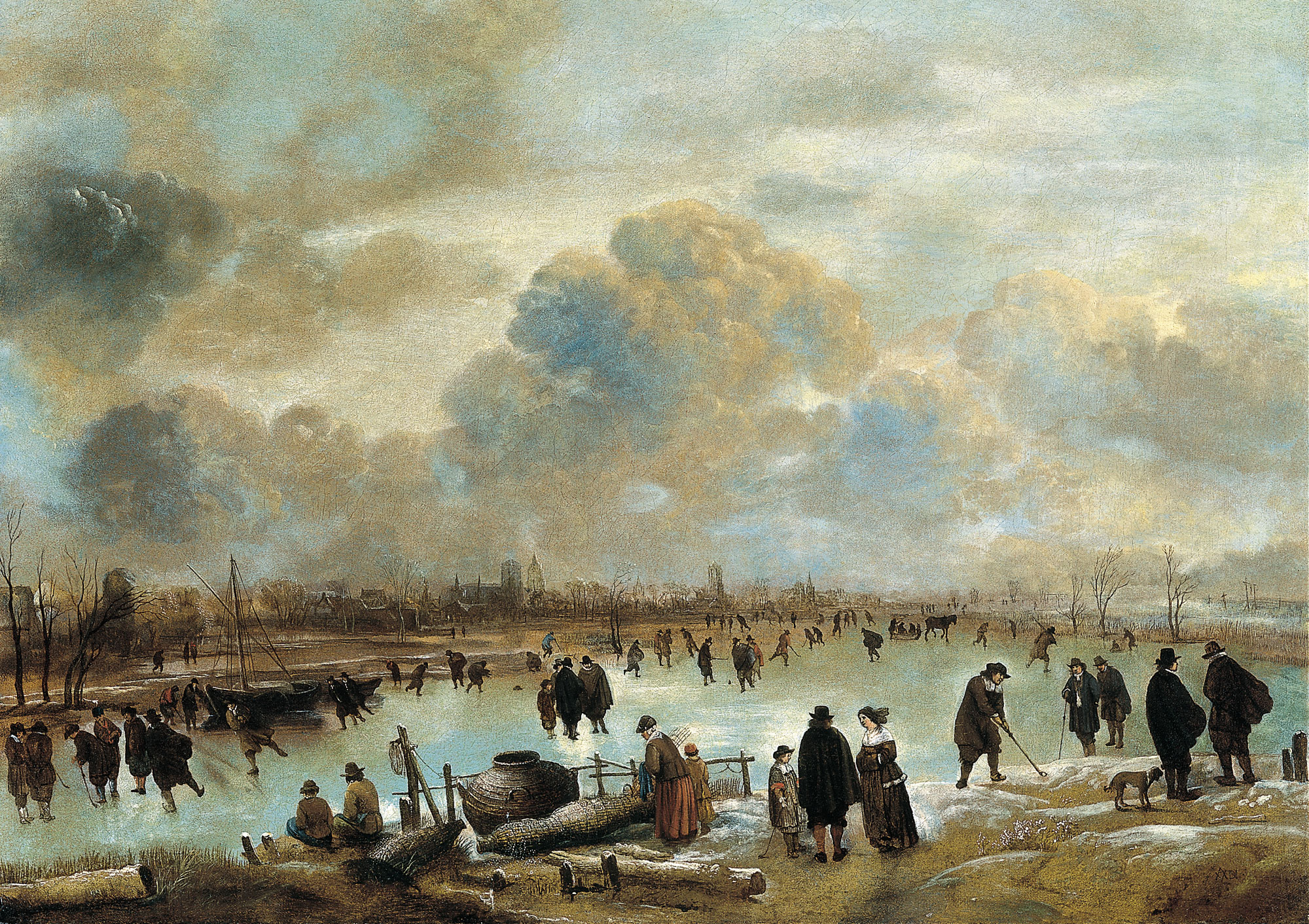 A specialist in winter scenes and moonlit and twilight landscapes, Aert van der Neer was born in Amsterdam but lived in his youth in Arkel near Gorinchem, where he came in contact with the local landscapists, Jochem (1601/02-1659) and Raphael Govertsz Camphuysen (c. 1597/98-1657).

Van der Neer had begun painting winter scenes by 1641 and dated several winter landscapes in the 1940s, but virtually none in his later years. Consequently it is difficult to establish a chronology for these pictures, but the figures’ costumes offer some clues. Those of the skaters and citizens in the present work, for example, point to a date in the early to mid 1650s, when Van der Neer seems to have been very active. It is typical of the artist’s winter scenes in depicting a frozen, centrally receding waterway with numerous tiny skaters and promenading spectators of all classes silhouetted against the ice. On the low bank in the foreground, figures sit to watch or stand to socialise and converse beside large fishing traps and baskets. One gentleman addresses the ball in a game of colf (the predecessor of modern day hockey and golf), while other groups, one beside a vessel frozen in the ice on the left and another farther back, try their skill at this popular pastime. In the distance a horse-drawn sleigh makes its way across the ice. Along the narrow bank on the left the dark branches of leafless trees and the gables and spires of an unidentified town rise up into the icy air. More than two thirds of the scene is devoted to sky and the clouds are tinged with slate blue and yellow. Although the paint surface has suffered abrasion, one can still appreciate the colourful atmospheric effects for which Van der Neer is renowned.

In some respects Van der Neer’s compositional devices are old fashioned, returning to spatial formulae that Hendrick Avercamp had introduced in the first decade of the century. The latter’s additive designs, which piled skaters up the surface of a frozen river stretching to a vanishing point on the central horizon, had been superseded by the winter scenes of Esaias van de Velde and other Haarlem artists, who introduced greater diagonal unity and more natural atmospheric effects. The next generation of winter landscapists, including Isack van Ostade (1621-1649) and Jan van de Cappelle (1626-1679), preferred more intimate, focused designs centring on a few motifs. But Van der Neer, who was older than either of these painters though something of a late bloomer, reverted to the time-honoured, encyclopaedic winter scenes with their community-wide compositions that Avercamp had popularised forty years earlier. However Van der Neer revitalised these retardataires designs with original contributions, namely an unprecedented responsiveness to coloured light and atmosphere.

We do not know how Van der Neer’s contemporaries responded to these inventions but there is some evidence to suggest that he may only have been an amateur painter with limited impact. Like other artists of the period, he maintained a second career as an innkeeper, and like one of his sons, was described in documents of 1659 and 1662 as a wyntapper (taverner). In the latter year he went bankrupt. The inventory of his belongings placed very low values on his paintings (mostly five guilders or less) and it is possible that he curtailed his artistic production after his business failings. At the end of his life he seems to have lived in impoverished circumstances, dying in his native Amsterdam in 1677.

A River near a town by Moonlight