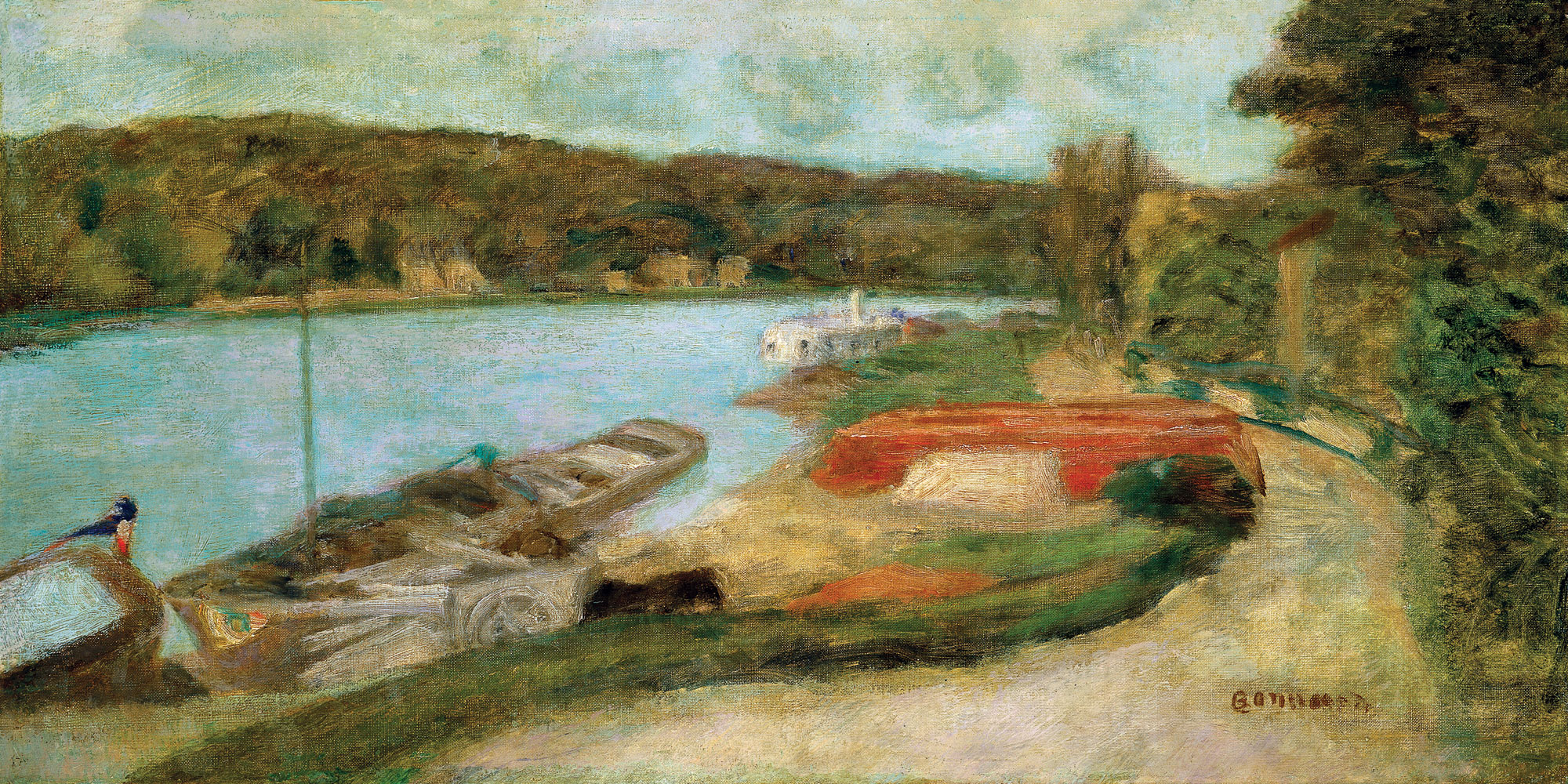 “A painting is a small world which has to be self-sufficient,” Pierre Bonnard used to say. And this work of a modest size, of such a discreet aspect, whose dark and quiet hues are very far from the radiant symphonies in blue and gold painted by the artist in the French Midi, proves it unquestionably. The Seine at Vernon once belonged to the gallery of Bernheim-Jeune, the artist’s dealer. Then it was shown in the important exhibitions organised in honour of the artist: the one held at the Orangerie museum in Paris in 1947, then at the exhibition Hommage a Bonnard shown at the Bernheim-Jeune gallery in 1956. This quiet landscape is representative of the painter’s attachment to the Norman location where he had chosen to spend some of his existence. It also shows a constantly renewed inspiration, nourished by an everyday, seemingly banal scenery, but observed with all the attention and passion which Bonnard showed towards all the things which surrounded him.

In The Blue Balcony, London, Courtauld Institute, dated 1910, Bonnard painted for the first time “Ma Roulotte”, the house which became his in 1912, and to which he became so strongly attached. At that time, it still belonged to Camille Delpy, a Parisian painter. Two kilometres away from Giverny, where his friend Monet fixed his residence, “Ma Roulotte” belongs to the borough of Vernonnet, on the right bank of the Seine, opposite Vernon. Bonnard’s house is still there, at 41 route des Andelys, and the view has not changed in the least. Passionately in love with the location, the painter balanced his Mediterranean and Norman sojourns, and the views of Vernon alternated with the sunny landscapes of the Cannet. The artist appreciated the Seine valley for the quality of the green of its hills and its meadows, for its changing sky, and also for the incessant river traffic of the barges he observed tirelessly. Indeed, “Ma Roulotte” is a privileged observation point, and also an ideal starting point to explore the surroundings. Claude Terrasse evoked it well: “On the side of the road leading from Vernonnet to Pressagny, and on the banks of the river, it is a link between the road and the river. Bonnard paints his house. He shows it to us as it develops along the little terrace at road level, with its light half-timbered walls, and protruding, beyond the terrace, over the garden. He also describes the scene he observes from his window, or from the top of the nearby hill: the green and golden fields at the beginning of the summer, the banks of the river lined with poplars, elms, ash trees, with the silver patches of the willows, the river itself, majestic with its boat life, now blue under the sun, now lead grey under the rain. Over this greenery and these waters unfurls a wide sky with clouds crossing, a sky which varies with the passing of hours and seasons, and which makes everything change according to its humour.”

Bonnard did not tire of painting the immediate surroundings of this location with its changing colours. He captured all the effects of light, noted down the life on the boats and the activities on the river. Here, the artist placed himself downstream from Vernonnet, looking towards the left bank. In the foreground, along the towpath, a barge is ready to load or unload goods. A horse harnessed to a cart and a pile of stones evoke what was then the main activity of the place, the exploitation of the limestone quarries. In the middle distance, we recognize the characteristic outline of the wooded hills bordering the Seine downstream from Vernon. The sky full of clouds, the grey light bathing the scene evoke with great precision the climate which the writer Léon Werth, a friend of the Bonnards, had described in an article published in the magazine La Phalange in 1910: “The clouds in Vernon hang over the plain and the Seine. It seems that the landscape has ‘a heavy heart’ before the storm breaks.”