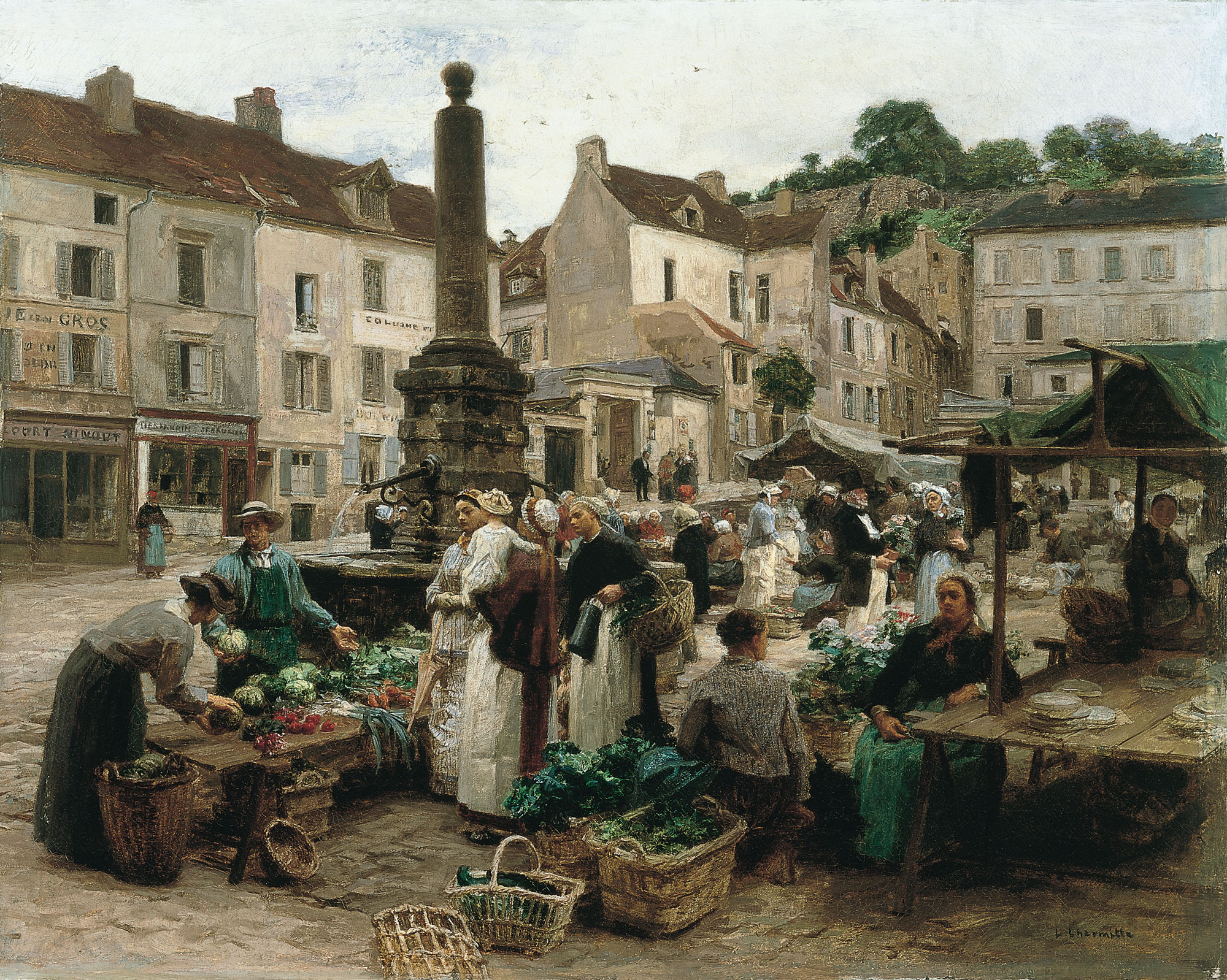 The Market at Château-Thierry, 1879

In 1888 Lhermitte made a series of illustrations for a book called La Vie Rustique, written by André Theuriet. In the introduction the author wrote: “We propose to trace the grand acts of the rustic drama: the soaring, the labour, the hay-making, the harvest, and the vintage; we wanted to describe the solitude of the farm, the business of the village life, the pleasures of Sunday, and the preoccupations of the weekdays […].” In a few words this text indicates exactly the position of Léon Lhermitte in French art of the late 19th century. He did not belong to the vulgarised post-romantic movement of artists who supplied cliché images of rural life in Europe in an endless repetition of all too familiar themes. On the other hand, he was also not a member of the artistic avant-garde. He refused to be considered a naturaliste, a realist painter whose work could be associated with noisy revolutionaries such as Gustave Courbet.

In the year 1879 in which he painted The Market of Château-Thierry, Degas invited him to participate in the Impressionist show of that year, but Lhermitte refused. Vincent van Gogh wrote from The Hague to his brother Theo in Paris that he would love to see a Lhermitte. He said that Lhermitte’s secret was nothing else but his profound knowledge of the human figure, but especially of the robust, severe workman type, and that he grasped his motives from the heart of the people. In another letter Van Gogh compared Lhermitte with Rembrandt because of his mastery and his excellent modelling. Lhermitte’s works were exhibited at the Secession exhibitions in Munich with Liebermann and Von Uhde in Vienna; they were reproduced in outstanding magazines such as Ver Sacrum of which Joseph Hoffmann, Kolo Moser and Gustav Klimt were editors.

Lhermitte had a special predilection for market scenes; they occur frequently in his oeuvre. In 1876 he painted The Fish Market at Saint-Malo; in 1877 The Apple Market at Landerneau (now in the Philadelphia Museum of Art), and in the same year The Market at Ploudalmézeau (now in the Victoria and Albert Museum, London). In 1878 followed Fish Sellers at Saint-Malo (now in the Tweed Gallery, University of Minnesota, Duluth), and his most prestigious market scene was made for the new Hôtel de Ville in Paris, Les Halles (now in the dépôt d’Ivry of the Musée du Petit Palais). Around 1895, he also made drawings of the markets of Villeneauxe and Nuremberg. He repeated the theme of the market of Château-Thierry in some fusaindrawings in which he showed the market square from different angles, sometimes even from a higher point of view. All these variations were made after the painting. His place was between Millet and The Hague School, between Jozef Israëls and Anton Mauve. In 1909 he participated in an exhibition in London, in the French Gallery together with Harpignies, Israëls and Jacob Maris. Edward Strange wrote on that occasion: “From the technical point of view, his great strength lies on his drawing-a matter of some importance in an age of paint.”

Lhermitte gives a wonderful picture of every day life in the French countryside: a young lady supervises critically her purchase of vegetables in the company of her child, carried by a nurse and her cook, who carries a basket and a bucket for milk or cream. The cheese vendor on the right has some time to spare to chat with a woman selling cabbages; halfway through the square we discover another elegant lady with a parasol, and an old gentleman admiring a potted plant. He might well be the village notaire, or even the burgomaster. Lhermitte does not dazzle his audience with a bright virtuoso; he quietly observes his subject and he brings his keen observations together into a scene in which profound humanity prevails.