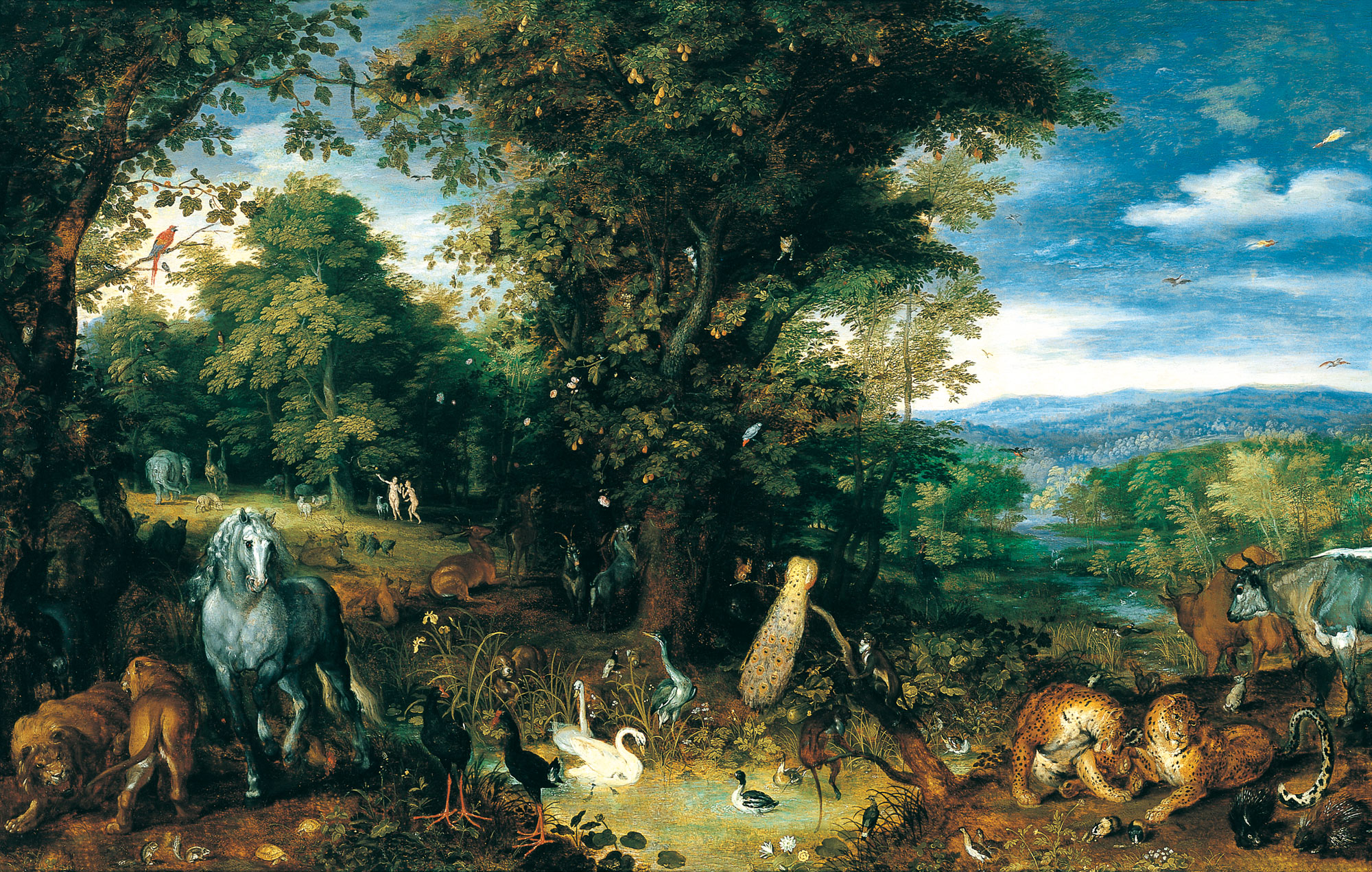 During his lifetime, Jan Brueghel, younger son of the celebrated painter, Pieter Bruegel, was generally regarded with his younger contemporary, Peter Paul Rubens as the leading painter in Antwerp. He was cosmopolitan and well-travelled. He spent the years 1592-1596 in Rome and Milan, first in the service of Cardinal Ascanio Colonna, and then under the auspices of his lifelong patron, Cardinal Federico Borromeo. In 1604 he was in Prague. By 1608 he was court painter to the Archdukes Albert and Isabella, Habsburg regents of the Spanish Netherlands.

Within the context of biblical subjects, Brueghel developed the Flemish tradition of the extensive landscape derived ultimately from the example of Joachim Patinir, but more recently dependent on the work of Gillis van Coninxloo. The present panel is most likely among the earliest of his many treatments of the theme of Paradise. Over 100 such landscapes are attributed to Brueghel, depicting a range of appropriate subjects, including not only the Garden of Eden with Adam and Eve in the background, as in the present work, but also the entry of the animals into Noah’s Ark.

In choosing the theme of the crowded, exotic, animal-filled landscape, Brueghel was most probably inspired by the example of Roelandt Savery who by 1610 had introduced it with the subject of Orpheus Enchanting the Animals (Frankfurt-am-Main, Städelsches Kunstinstitut). Brueghel and Savery were both in Prague in 1604 where the latter remained in the service of the scholar-connoisseur, the Emperor Rudolf II and his successor, Matthias.

Several of the most prominent animals in this painting, however, are clearly derived from examples by Brueghel’s fellow Antwerp artist, Rubens. The horse would appear to have been derived from Rubens’ lost Equestrian Portrait of the Archduke Albert. This work is represented prominently among Rubens’ paintings in the gallery depicted by Brueghel as a representation of the Allegory of Sight, 1617 (Madrid, Museo del Prado). The lion and lioness on the left occur in Rubens’ large-scaleDaniel in the Lions’ Den (whereabouts unknown; formerly Hamilton Collection) for which preliminary drawings survive. The leopards repeat two of the three in Rubens’ lost painting of a satyr, nymph, putti and leopards which was among those sold by him to Sir Dudley Carlton in 1618 and which is now known only from an engraving. Such derivations are far from being evidence of mere plagiarism: rather they attest to the close relationship between the two artists. Indeed, they collaborated regularly. They even produced an ambitious variant version of the present subject together,Adam and Eve in the Garden of Eden (The Hague, Koninklijk Kabinet van Schilderijen Mauritshuis) in which Brueghel painted the landscape and animals, and Rubens the figures. The panel has the signatures of both artists.

Changes to the horse and camel in the course of execution, visible by means of infra-red reflectography, suggest that while painting this work Brueghel was still establishing the form of the motifs that would become staple ingredients in his subsequent treatments of the theme. This argues for an early dating, most likely preceding the version of this composition in Rome in the Galleria Doria Pamphilj, which is supposedly dated 1612. The present panel is most likely to be among the first versions of a theme that would become a staple of Jan Brueghel’s extensive workshop output, attracting patronage from among some of the leading princely families of Europe.