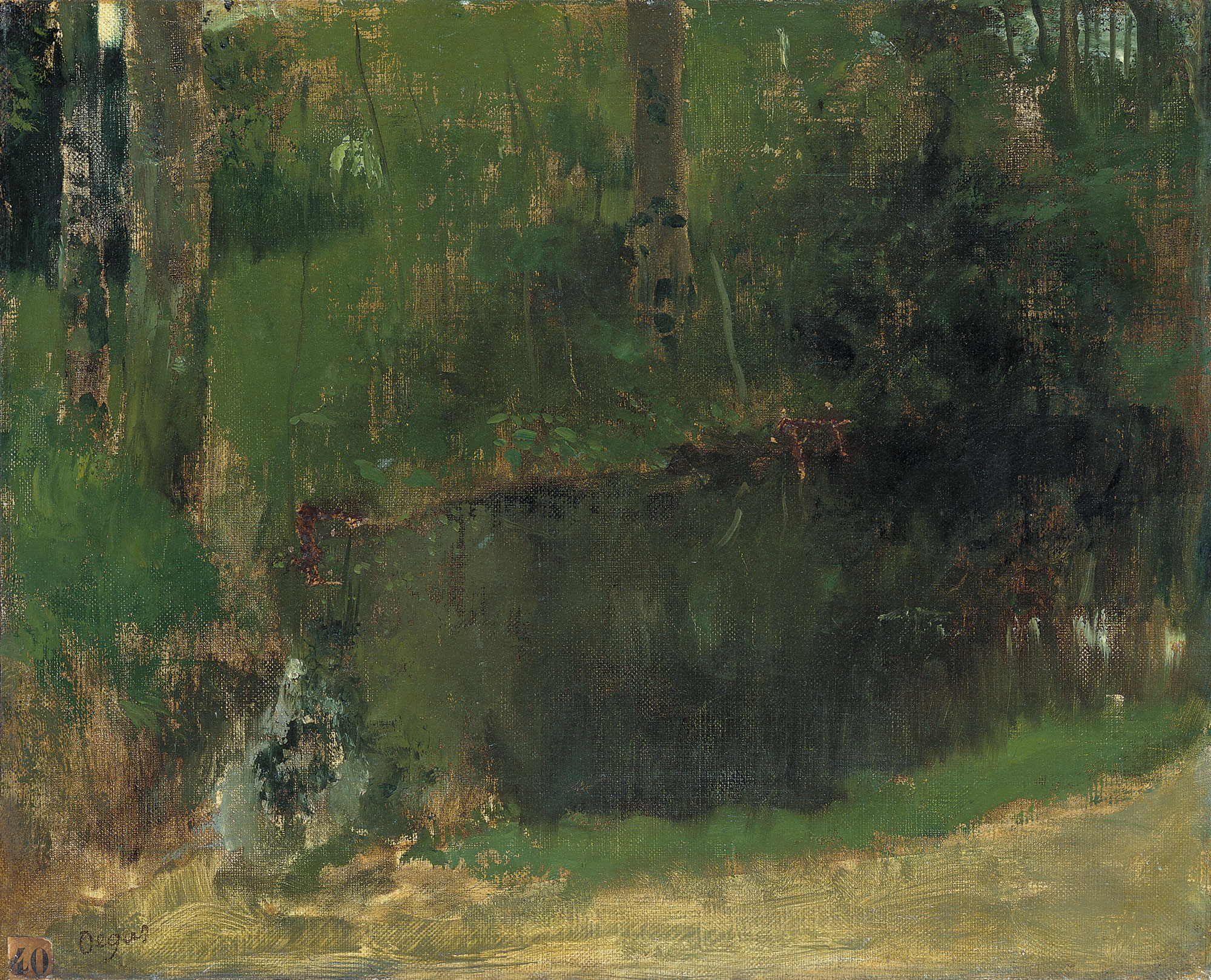 Degas’ reputation as a painter of the modern human form had completely eclipsed that of the landscapist, and perhaps the only landscapes known to most students of his oeuvre before 19931 were those that served as settings for his scenes of horseracing in the Parisian suburbs. Yet, Degas made three groups of landscapes, one in pastel around 1869-1870, the seconds in monotype in the last half of the 1870s and the third and final in colour monotypes around 1889-1890.

This darkly enigmatic landscape belongs to none of those groups and, hence, forms part of what might be called the «prehistory» of Degas as a landscapist. Unlike all three later groups, which were on paper, this is a «traditional» oil-on-canvas, which makes, thus a contribution to the distinguished French tradition of landscape painting that had been reinvigorated in French art after the publication in 1799 of Pierre-Henri Valenciennes’ treatise on the subject.

This view, however, owes nothing to that tradition. Rather, it was to artists of the Barbizon School and to the somewhat later forested landscapes of Gustave Courbet that Degas turned for inspiration in making this landscape of a secluded forest pool. Yet, the resolute darkness of the picture and its comparatively rough surface have greater affinities with the landscapes painted by Gustave Courbet along the banks of the Loue River in far eastern France in the 1850s and 1860s. Degas had seen such works both at the Salon exhibitions and in the private galleries of Paris.

In 1867, Degas went to rehearsals and performances of a ballet called «La Source». With music by Ludwig Minkus and Leo Delibes, this lengthy and ambitious ballet, set in the exotic distant of what is now the Republic of Georgia, it was at once orientalist in its costumes and historical exoticism and realist in its use of an actual horse with actual water on the Parisian stage. This latter aspect of the set represented by Degas was immediately linked to the landscapes of Courbet. And, given the fact that the ballet «set» in which Degas chose to set the rehearsal of his final painting (Mlle Fiocre in the Ballet «La Source», Brooklyn Museum of Art, 1867-1868) was a pool deep in the forest, it is likely that, in addition to the many figure drawings and compositional studies well known to students of Degas, Degas made landscape studies as well.

Indeed, it is the reflection in deep-dark water that is a principal subject of both the large Salon painting above mentioned and in a smaller study made with nude models now in the Albright Know Art Galery in Buffalo, New York. Nothing in Degas’ oeuvre is closer in spirit, lighting, and motif to the Carmen Thyssen-Bornemisza painting than are these two figural compositions. Yet, in making the painting, where did Degas go? Did he simply take his canvas and easel to the stage set itself? Or, more likely, did he take the same equipment to a secluded in pool in the Forest of Fontainebleau, the Bois de Boulogne, or any of the nearby suburbs of Paris. In working in isolation in any of these settings, Degas could easily have studied the effects of shadow, darkened foliage, and water without any distractions, learning lessons that he could then apply to the painting of the figural compositions painted on stage or in his studio.

Where Courbet’s paintings of the grotto and valley of the Loue are thickly encrusted surfaces, in which paint is laid on in layers with a palette knife, Degas’ is virtually the opposite. Degas laid his dark browns and greens onto a white primed canvas with large brushes and proceeded to use the palette knife to scrape the surface, revealing the canvas weave and the white priming throughout the painting. While no less Â«crudeÂ» in appearance than a Courbet, it is everywhere «thin» whereas Courbet is «thick.» How different he was to his apparently «realist» sources. Whereas they went into the forests to find a world apart from the city, Degas walked to a small pool so as to learn lessons that would be applied to a great -and completely urban- portrait.