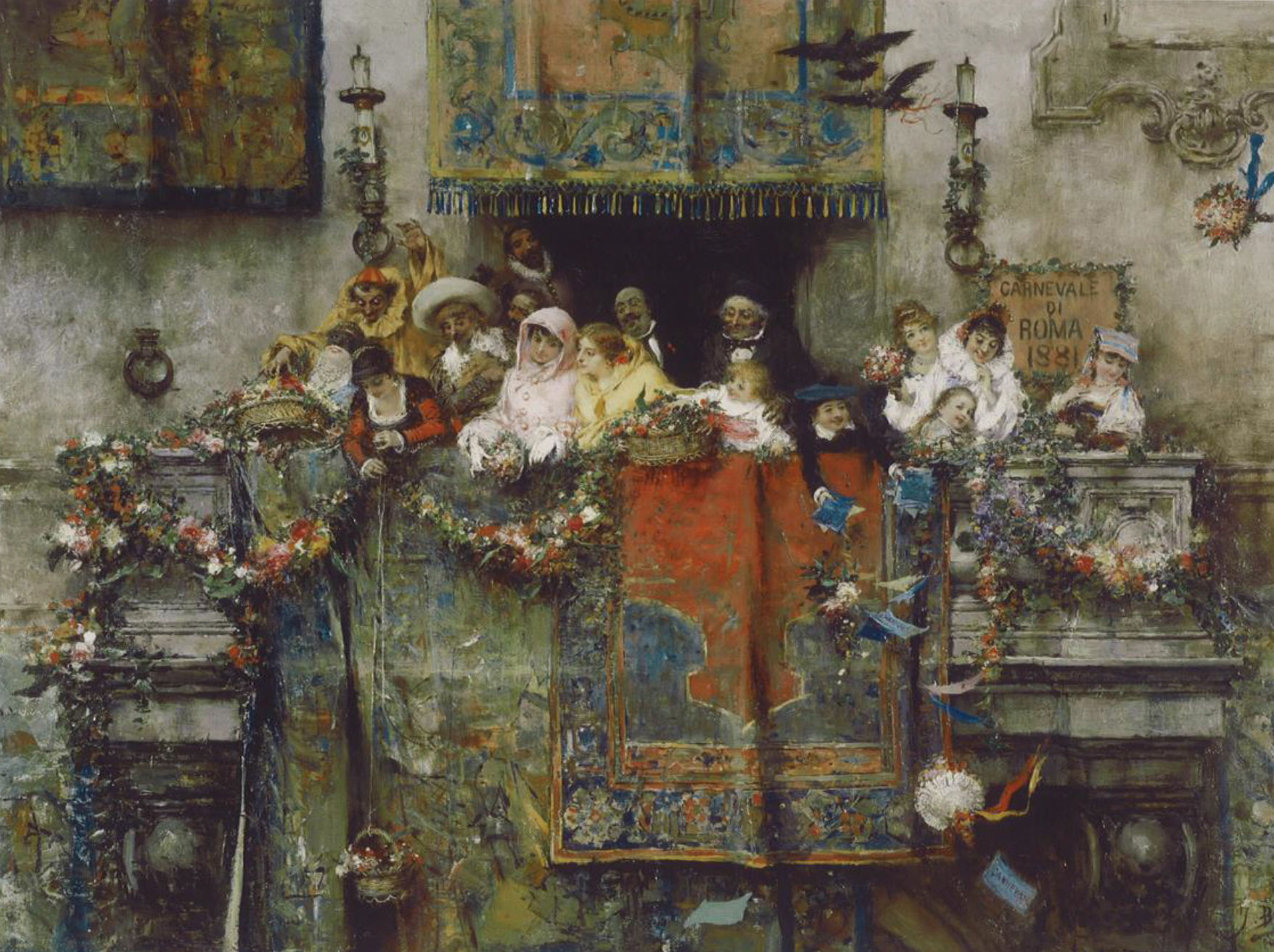 Several compositions of this type are known to exist in the production of this painter born in Cañamelar, Valencia. During his first stay in the Eternal City, where he arrived in 1878 and would finally spend most of his life, Benlliure contracted like so many other Spanish painters that artistic fever that centred around the Macchiaioli.

In scenes in small pictures like this one, painted with vigorous strokes, sketchy in places yet extremely detailed – précieux – elsewhere, artists depicted events from everyday life and social and popular customs having little to do with academic or history painting.

This picture captures a scene during carnival time in Rome, where the oldest carnival traditions were to be found. From the balcony of a Rome palazzina adorned with tapestries, garlands of flowers, candles and hoops (in all likelihood one of the mansions on the popular Via del Corso where many of the festivities took place), various figures, some in everyday dress, others in their Sunday best, are obviously enjoying the events down in the street.

Like a photograph, this picture has captured a precise moment in time. A woman on the left lowers a small basket of flowers on a string, while behind her stand a man dressed as a wizard and a jewel-bedecked woman with a basket of flowers in her hand. Closer to the centre are two women (the one in pink bears a strong resemblance to Benlliure’s future wife, María Ortiz Fullana,) accompanied by other figures, one dressed as a musketeer. On the right-hand side in front of an inscription bearing the picture’s title with the date and reading “Carnevale di Roma”, two children toss down flowers and papers with rhyming couplets, some with the word carnevale perfectly legible on them, while one woman, at the centre of a group of three, wearing a white, 18th-century-style dress with a large ruff, seems to have cast one bouquet of flowers while holding back another in her right hand.

As stated above, several compositions of this type are documented. For example, in December 1885 Benlliure was putting the finishing touches to a large canvas entitled The Carnival in Rome which may have been the one he presented in Italy in the late 1880s with the title The Carnival in Rome: Battle of Flowers. Some believe that the study for this unlocated work is a bozzetto on canvas (120 x 182 cm) now in the Benlliure Museum in Valencia. The painter is also known to have presented a Roman Carnival with other works at the Third Regional Exhibition of Fine Arts in Valencia in 1935.

On the same theme and very similar to this magnificent panel painting – although with darker tones and a background opening up to the right – is another canvas (62 x 102 cm) belonging to a private collection and reproduced several times. Furthermore, the Masaveu Collection possesses another Carnival in Rome (60 x 92 cm) that is very similar to this last painting.