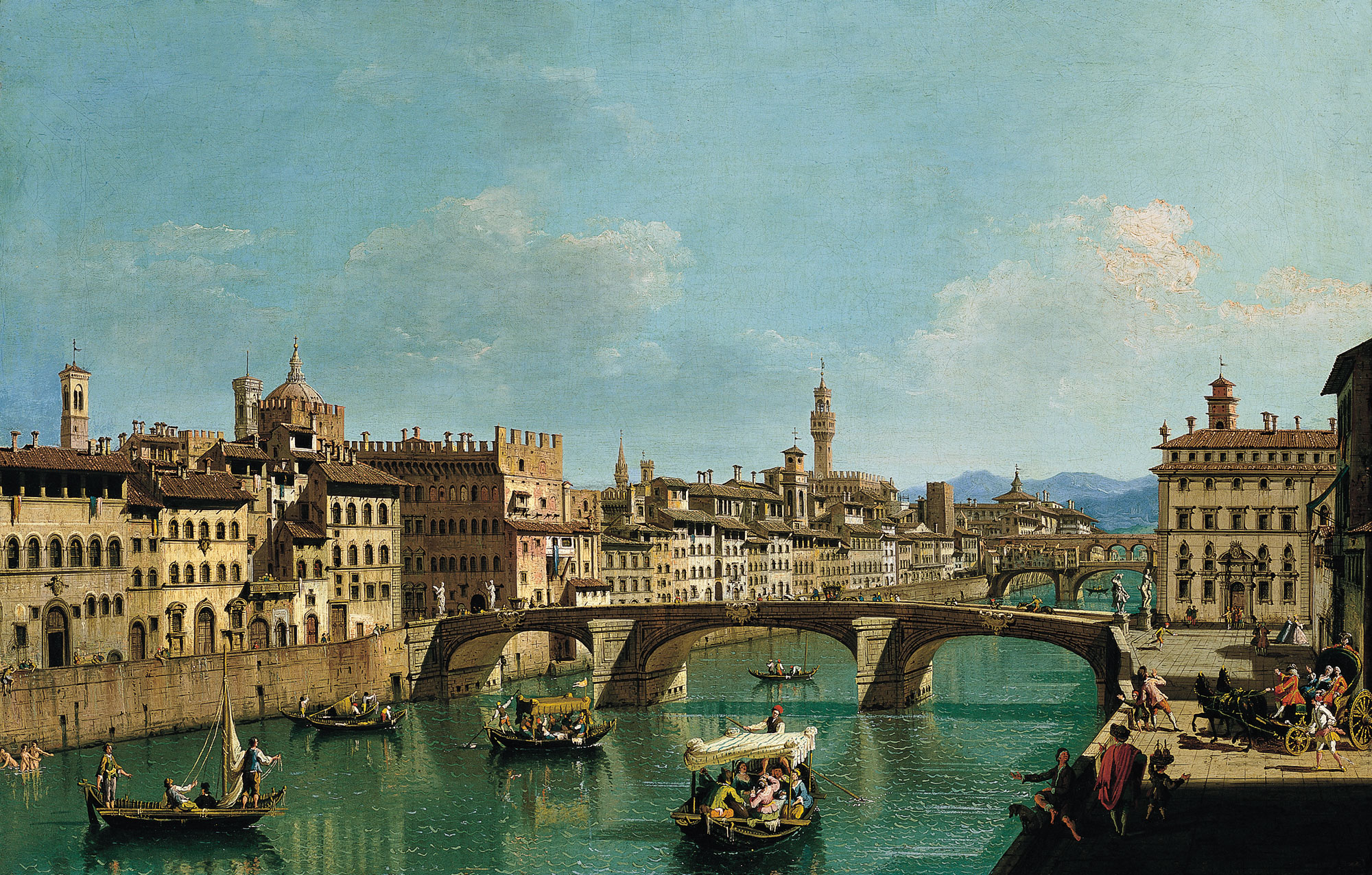 The Arno River at the Santa Trinita Bridge, c. 1741

The urban panorama of this Florentine veduta by Zocchi is still recognisable. The Lungarno Guicciardini appears like a highway as it emerges from via de’ Coverelli where an aristocratic carriage suddenly swings round, to the danger of passers-by. Behind, the façade of the magnificent 17th-century Palazzo dei Padri delle Missioni appears in its entirety.

This painting was published by Antonio Morassi who noted its relationship -articularly with regard to the dimensions- with two other paintings, formerly in the possession of Gerini and now with Marco Grassi, showing a view of Florence from outside the gate at San Niccolò and a view of Piazza della Signorie. There is good reason to identify the Thyssen veduta with one of three shown by Count Agnolo Galli Tassi at the exhibition at the Santissima Annunziata in July 1767, shortly after Zocchi’s death on June 22. This “triptych” consisted of the View of the Santa Trinità  Bridge, which almost certainly corresponds to the Thyssen painting, a View of the Pescaia, and a View of Piazza San Firenze. In an engraving which is loosely based on the Thyssen painting, and which is in turn based on a drawing -one of the seventy-seven drawings that were executed for the two series of engravings with views of Florence and its villas, and were published in 1744, all of which are now in the Pierpont Morgan Library in New York -Giotto’s campanile and the top of the cathedral dome with the lantern have been added to the skyline. According to F. M. N. Gabburri, work on engraving Zocchi’s drawings of views of Florence began as early as 1741 or in early 1742, the year that the collector and historian died, which implies a similar date for the present painting.

The compositional and stylistic inspiration of the Venetian vedutismo of Canaletto and Bellotto is obvious here. Zocchi had seen this style at first hand between 1739 and 1741 during his sojourn in Venice, where he had learned the technique of copper-plate engraving in the workshop of Joseph Wagner. Since his youth Zocchi had enjoyed the high esteem of Gabburri, through whom he had been able to see a painting by Canaletto in Florence in the exhibition at the Santissima Annunziata in 1729, particularly due to the good offices of his illustrious correspondent Anton Maria Zanetti the Elder. The circumstance was probably of particular importance to Zocchi himself, who had in the meantime become the protégé of the Marchese Andrea Gerini, in whose house he painted vedute “in the style of the famous Canaletto”, according to Gabburri.

The relationship with the paintings of Belloto -who in his own Florentine veduteactually adopted the angles preferred by Zocchi- and even more with those of Marieschi has been emphasised. This can be seen in the dense hatching which breaks the surface of the water in some of Zocchi’s river vedute, particularly in the one of the “lungarni” with the bridge at Santa Trinità  seen from the Palazzo Ruccellai and in the painting presented here. This is a very rare case, since it is documented by the above-mentioned preparatory drawing in the Pierpont Morgan Library which was used for the present painting and for the engraving by the Florentine Vincenzo Franceschini (published with the other twenty-three vedute of 1744 by Giuseppe Allegrini). The motif also appears in a painting in the private collection of Thomas Patch. Of course, the bridge at Santa Trinita was especially suitable for the city festivals which are one of the important motifs of Florentine vedute as reinvented by Zocchi.