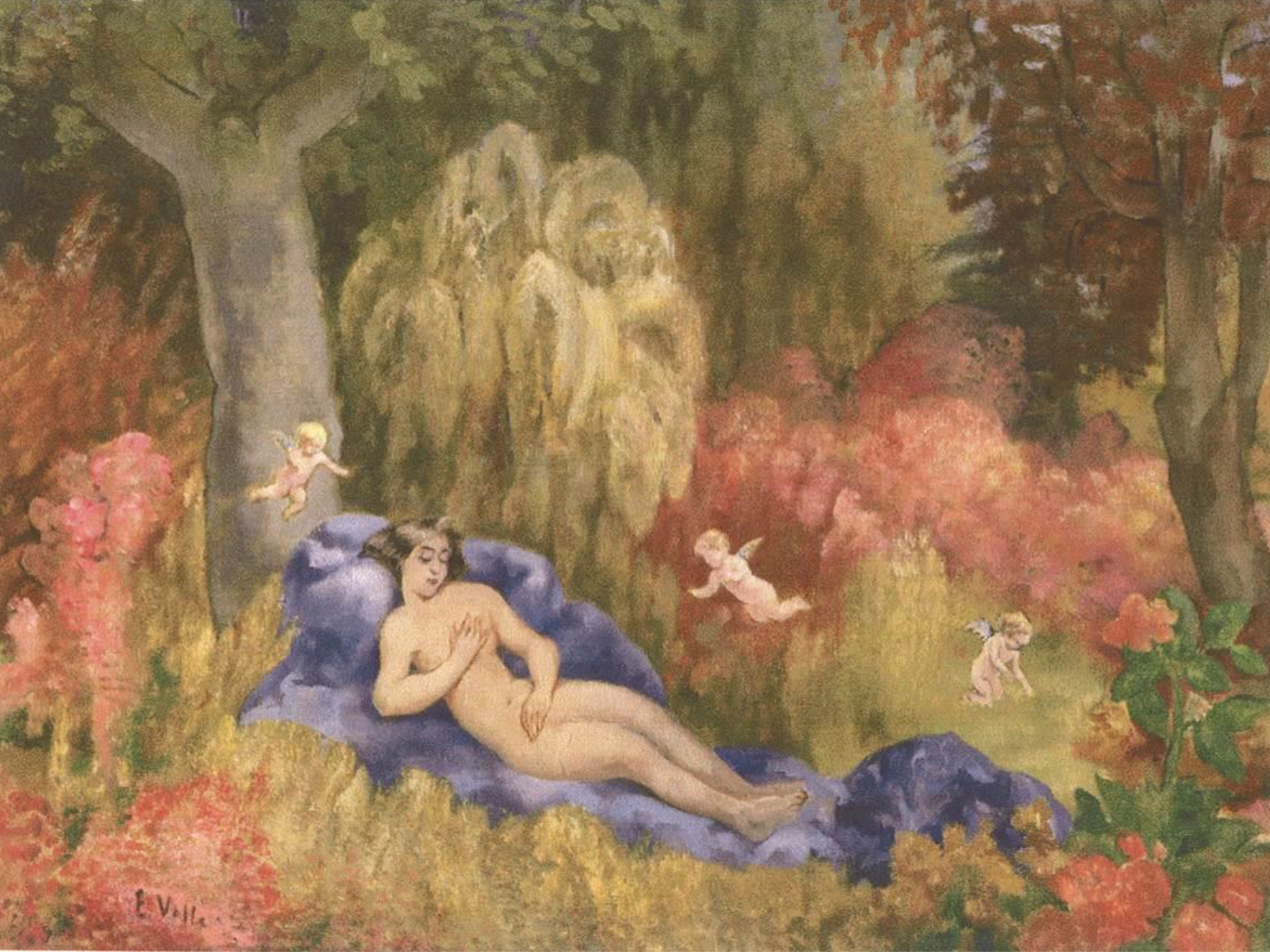 Evaristo Valle was a versatile artist who practised many kinds of techniques and genres and was one of the most personal painters on the Spanish fin-de-siècle art scene. A thorough modernist, he was virtually self-taught and developed a style combining lyricism and expressionism. When he left school and was little more than a teenager, family circumstances compelled him to seek work in a variety of trades; his decision to take employment with a lithographic printing house enabled him to draw closer to the world of painting. His training as a lithographer and the graphic illustration projects he worked on in Paris around 1900 were decisive to his view of the world. Despite suffering from agoraphobia, this Asturian painter’s attitude to life was dynamic and cheerful yet not devoid of a certain melancholy with a wry, grotesque touch which proved decisive in his work.

In his own way, Valle partook of a modern Goyaesque tradition which was also shared by Picasso and Gutiérrez Solana. It should perhaps be remembered that at a very early stage in his career Valle’s work reflected a certain degree of surrealism, as can be seen in the oneiric features of paintings such as La muerte del poeta (“Death of the Poet”, 1904) or Emigrantes(“Emigrants”, 1911), and his technique acquired avant-garde characteristics highly reminiscent of the symbolism of Redon and also of expressionism, as in Tipos de mar (“Seamen”, c. 1950). We have said that Valle is somewhat Goyaesque, but he is also perhaps the Spanish painter who reminds us most of Gauguin in expressing the relationship between his figures and nature and nature’s own decorative and expressive values. “Like Gauguin, with whom he had so many things in common, Valle disdained copying from nature because he aspired to a mental synthesis of vision,” said Lafuente Ferrari, who also pointed out certain affinities with Cézanne in his combinations of spots of colour and underlined elements.

Though a close observer of all around him, Valle processed information poetically. His relationship with his native Asturias was also extremely unusual for he loved all things local but with a universalist spirit. It is his canvases which best reflect his love for Asturian folk and landscape. His is an unmistakable type of landscape, gentle and diffuse with little of the descriptive about it and sometimes resulting in scenes pervaded by a dreamlike quality. The same could also be said of these two nudes, painted towards the end of his life.

Forming a pair, the two oils are identical in size and share certain constants which became ever more accentuated in his work in the last stage of his career: a markedly naïve tone through which the scenes lose all traces of Classical seriousness and resemble the product of a dream whose every element serves to boost humour and irony. The two nymphs or Venuses lie in the midst of some fantastic, dreamlike version of nature, a lush landscape of greens with twisted tree trunks that endow the scene with a decorative, sensuous and idyllic character. One of the young girls has adopted a Venus Pudica,attitude as she lies on a blue cloth, while the other sleeps on a white cloth as spring blossoms all around her and cherubs, like forest insects, flutter about, seeking out and sipping the nectar of the most beautiful flowers, perhaps in order to present them as offerings to the goddess.

Like some of the Venuses with the greatest impact on the history of art (Praxiteles, Titian, Giorgione), they do not forget to cover their sex and breasts with their hands in a gesture of modesty that disassociates them from more lascivious deities, despite their mythological alibi (Cabanel), or that of other more directly “undressed” bodies (Goya). The rejection of all naturalism, the pastel tones and the inventiveness inherent in those Arcadian spaces remind us of the surreal atmospheres of fairy tales in which anything is possible. All it needs is for one of the cherubs to release its passion-filled darts to change everything.

At around the same time as these paintings, Valle also produced an Adam and Eve (Asturias Museum of Fine Arts) with nudes in a similar verdant paradise. The keynote with Valle’s nudes in general is his sense of humour – rather than sensuality – as conveyed through a certain degree of caricaturization and an underlying naïve, myth-shattering intention.

Valle’s work remained consistent throughout the last decades of his life. Between 1937 and his death his creative spirit and aesthetic refinement were proof against deterioration of any kind. These two works prove that point, despite the fact that they were painted during a difficult time in his life.