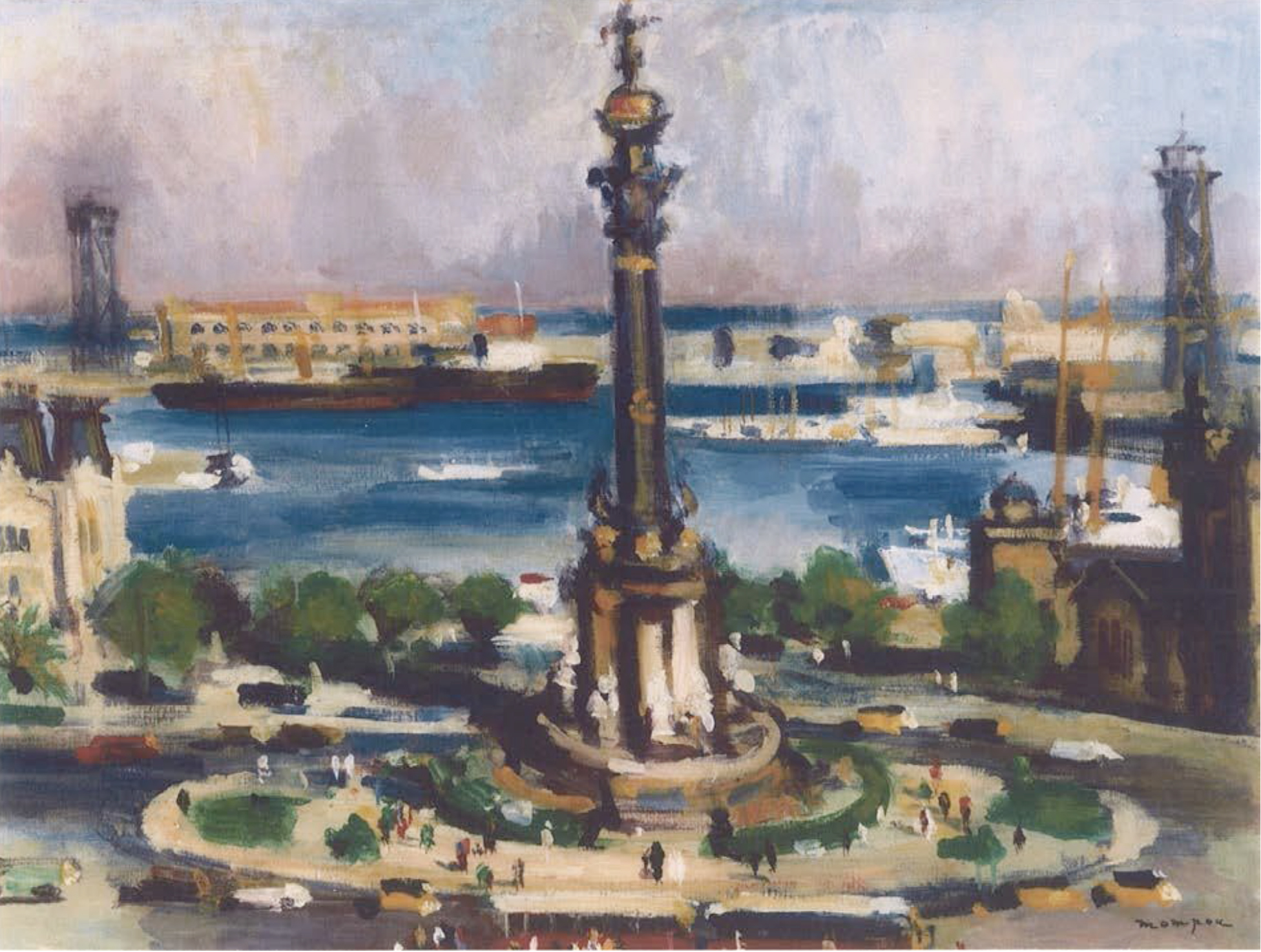 Mompou, whose maternal family was French, was always a frenchified artist. For a number of years before the Spanish Civil War he had had a house and workshop in París, but a serious case of tuberculosis and the consequences of an operation that he had to undergo meant that he could not practice art for many years. His return to painting was marked by the adverse context of the Second World War, and he would never reopen his Parisian workshop, although he did continue to travel to -and paint in – the capital of France every once in a while. Mompou’s francization translated into a pictorial concept rooted in Fauvism, which he placed at the service of such classic themes as the human figure, still life, landscape, but the urban theme of Barcelona did not feature among these landscapes until 1930. The stimulus for him and many Catalan painters like him was the competition “Barcelona seen by its artists”: Mompou won one of the first prizes in the competition. Before this memorable competition was organized, the city of Barcelona had only been a sporadic protagonist in the works of Catalan artists.

The Monument to Christopher Columbus was one of the first themes that Mompou painted following his “conversión” and the conversion of many of his contemporary Catalan painters to the Barcelona cityscape (his painting of the monument from 1930, Barcelona, Raimon Maragall collection) and he painted it several times again after that; these include many works from the post-war period: one in 1950 painted from afar, the picture that we are looking at here from 1956, another that he painted in 1959 also from afar, and again paintings from 1959, 1960, 1962 (he painted it twice that year) and 1963.

Mompou had already painted a large vertical monumental element in Parisin 1932, when he depicted the Place de la Concorde, and several other times he focussed his compositions on other commemorative monuments such as the Are de Triomphe du Carrousel in Paris (1952), the Are de Triomf in Barcelona (1955) or other Barcelona monuments such as those dedicated to Antonio López or the Catalan Genius (1954), the fountain in the Placa d’Espanva (1955), and the monument to Rius i Taulet (1958), among others.

These paintings by Mompou from the post-war period are the culmination of the series that he started before his illness and they were disrupted by it; they maintain intact the aesthetic values that had helped to establish the arí Europe and in the United States.

This picture, painted in 1956, was exhibited at the Sala Parés, where director was Joan Anton Maragall, whom Mompou was united by con lt appeared in the photographic archive of Francesc Serra and was subsequently incorporated into the municipal archive of Barcelona une number 25518. lt then became pa: of the collection of Miquel Lerín, a prominent customs agent who put together an important art collectior.

In his intriguing diary, the engraver painter and editor Jau me Pla corner on the figure of Lerín -without actually making any mention of his surname-, on the occasion of his death in 1984. In the article hespe “of his sense of public responsibilit his multiples interests, the exarnple set as a gentleman of Barcelona, a: reactionary, as a decadent, as a cla but also as a person who was qeru interested in the city, music and sp Whenever asked, he was almost al willing to collaborate on sorne civil business or other.”

When Lerín died, part of his collect was dispersed, and this painting sr sorne time at the Sala Subarna bef reaching the enterprise Barcino Ar1 from there it was incorporated into singular collection of Baroness Thyssen in 1995.